Finally ... back on the 'Horse again. 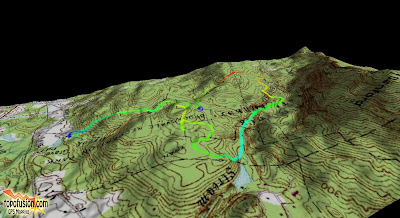 I think most people wouldn't tollerate the issues that I have had with this bike and would have sold it a long time ago. After my last ride on the 'Horse, I ended up with rear flat. At first I thought it was prickers but when I checked the tire, there was a little piece of metal sticking through that was getting my tube every time. I threw on an old Specialized Hardrock 26 x 1.95 but looks more like 2.1 or even a 2.2. That's the thing with Specialized tires, they are bigger that they say they are.

So it was off to Brooksvale Park in Hamden for the first CT NEMBA Trail Ambassador Training Session for 2010. After some instruction, eight mountain bikers headed up one of the main trails in Brooksvale Prak into the Naugatuck State Forest. It was insanely cold and I was a bit undersdressed with shorts and my summer riding shoes. Forturnately, on the climb up, I warmed up quickly. Also on the initial climb we lost one guy who I think wasn't in the best of shape and decided to bail. Before entering the State Forest, another guy's hub blew and he had coast back to the lot.

We ended up doing a nice 5 mile loop in the State Forest that included the jump trail. Then it was the climb up along Brooksvale Stream, which we had to ford and while in the river, I stalled out and had to put a foot in the water. That sucked! On the other side, I wrung out the water and I was surprised but my toes were able to stay warm enough with my wool riding sock.

Then it was up the Cromie Road to a trail that cuts back over to the boundary with Brooksvale park and then back to the lot. 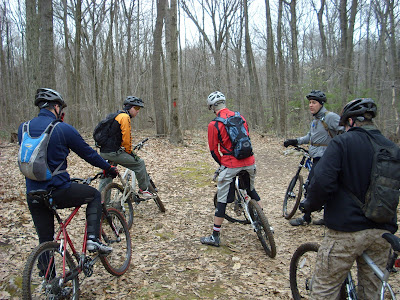