Riding the Raleigh XXIX with a Bushnell EBB

I had originally wanted to ride the Tribury Monster Cross Sunday morning, which consists of the entire length of the Larkin Bridle Trail, riding through Hop Brook, then up Rt 64 to the Middlebury Trolley Trail, the old road through Flanders Nature Center, down the Woodbury Trolley Greenway and then back down 67 to Southbury.  That obviously didn't happen today.

On Saturday, I solidified my plans to hold a Trail Work day on the new trail at Collis P Huntington State Park and realized that I would need to ride at Huntington on Sunday to check out what still needed to be done for this next work session.  Also, it would be an excellent opportunity to put the Bushnell EBB through it's paces. 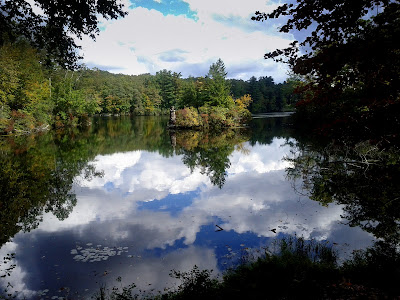 I really lucked out by pushing back when I would be riding because by early afternoon the sun was out, it was in the upper 60s and with the fall foliage just starting to come out it made for an awesome day of riding. 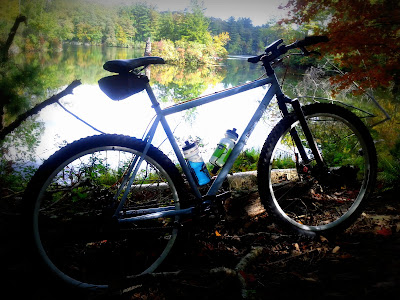 I was tempted Saturday afternoon to add the Manitou Tower to the Raleigh but talked myself out of it because I think I still need a little more non-suspended punishment.  Instead, I put on the Velocity Blunts and the Rampage Panaracers (29x2.35) to soften the ride somewhat and it turned out to be perfect. 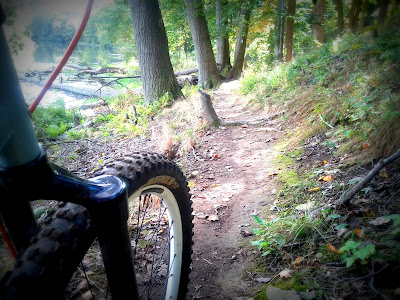 Trails at Huntington were perfect, despite all the rain we got on Saturday.  I finally tried the Rock and Roll bail out, only I was bailing into the trail.  It's a little overgrown with prickers, too.  What I did ride on Rock and Roll was really sweet and the bike really handled itself well. 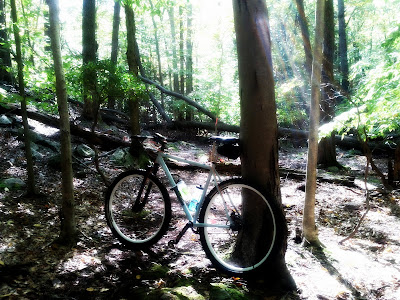 Then I headed over to the new trail that I started building last spring.  It's pretty evident that this is now an actively ridden trail yet it still needs work.  No one hasn't done anything on the northern section yet, it needs a lot of rock armoring.  Some good benching was done further south and an interesting armored bench was put in, too.  A widow maker tree (above) finally came down and the trail has been routed around that.  Hopefully I can get somebody out with a chainsaw to cut the tree to improve the flow and perhaps christen the first skinny of the trail! 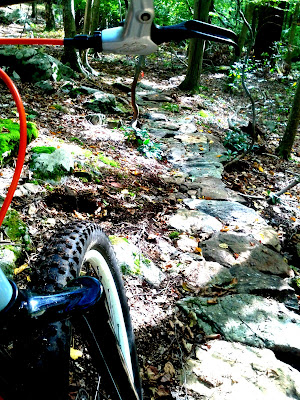 From there I did the usual loop, counter clockwise on the blue trail, up Little Vomit and into the badlands.  Along the way, rode over the Devil's Ribcage and at the intersection with the White Trail and the Equestrian Ridge connector trail I met up with an acquaintance on horseback.  We playfully admonished one another about trail usage in the part of the park and caught up a little bit.  Bike performed exceptionally well.  The Bushnell slipped a little bit but that was because it wasn't tight enough, yet the chain never dropped.  Except for Little Vomit, I cleaned every climb. 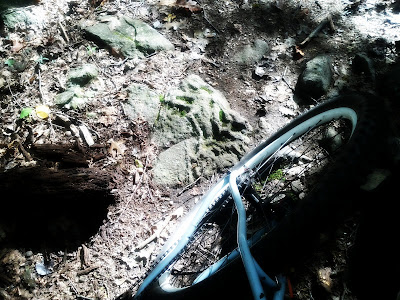