You could not have asked for a better fall day to ride in the woods!  Temperatures hovering around 60 degrees, clear blue sky and still there is enough sunlight to see the trail.  As I was driving through town, I passed Paula going the other way and noticed her bike on the back of her car.  Thinking she was heading to Upper Paugussett or Huntington I texted her (while stopped at stoplight) to see where she was going.  I got her reply in the lot at Waldo that she was coming to Waldo but had to drop something off in town.

It was another RAWWW (ride after work) at Waldo on Wednesday with Stephen and his dog Maverick.  The dog is a white lab that Stephen affectionately calls a fat sausage and is a really great trail dog.  It's almost weird to see the dog running along the trail a foot or two off of Stephen's back tire, but when he gets too far behind cuts knows exactly when and where to cut through the woods in order to get back on his wheel.  It's uncanny, especially the way the Where's Waldo Trail cuts back and fourth as it descends down to the lake.  I find myself often behind Maverick and often refer to him, and Stephen as well, as the Trail Blocking Sausage because he must eat rather well at in Roxbury. 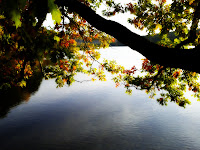 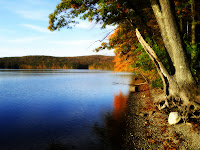 Nearing the end of the Waldo trail I yelled out to Stephen telling him to continue up the Extra Credit Trail but he didn't hear me and I didn't see him down by the water so I assumed he continued on.  I have been wanting to ride it in both directions after Paula did more benching on the section of the trail with a really steep side slope.  That trail is fun to ride down but with the new benching I knew that it would be a great ride in the other direction.  It was but I did lose Stephen. 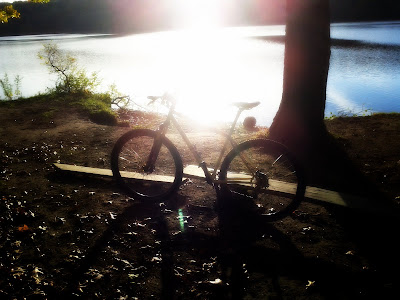 In fact, when I got down to the water's edge, I lost Paula as well.  So I hung out and marveled at the brilliant fall foliage along the river.  The Spot was riding fantastic!  I can't get over how smooth this bike is.  In fact, now that I have it dialed in, the last time I was here the bars were too high, I finally cleaned that smaller Up-and-over of logs that lies in the middle of the trail, in both directions!  Having the seatpost up an extra inch really made a difference and I think I came out of the saddle to climb once or twice. 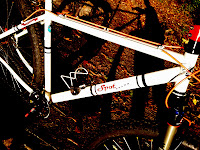 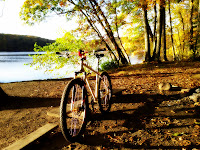 But of course there is alway's Murphy's Law.  Since going back to wearing a hydration pack I thought I would be all cool and Rambo by wearing my Tanto Knife on my shoulder strap.  I have been hearing more and more stories about decent sized critters in the forests lately.  The black bear population in the area seems to be increasing, Paula said she saw a Fisher the other day Waldo, and then there are many reports of a large predator, bigger that bobcat but more lithely than a bear, that I keep hearing about that the State won't recognize as living in our area.  With my knife on my shoulder strap it was like the good old days of an ROTC Field Training Exercise. 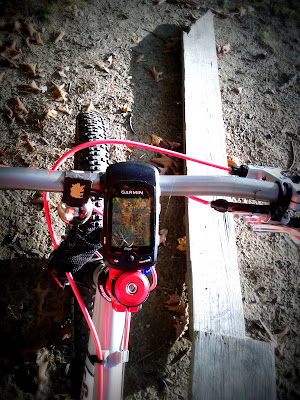 But as I was just riding along the knife came out of its sheath and flopped in front of me onto the trail.  At first I thought it was a tire lever but I couldn't fathom how it could have came out of my pack to flop in front of me on the trail.  Then I recognized the blade and immediately stopped to pick it up.  I pulled the sheath off the strap and put it in my pack.  I didn't realize until later that the reason it flopped in front of me is because it must have bounced off my Garmin, thus cracking the glass plate.  CRAP!  Oh well, now I have to figure out whether it's worth trying to get it fixed or perhaps replace this with something better, like the Garmin 800, and keep it as a back up. 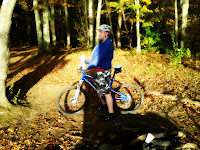 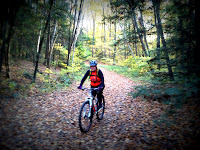 While down at the lake I met Chris, the guy who has been perfecting Dora the Explorer, which is the huge, new log ride in the middle of trail.  In fact, there were quite a few riders there today. 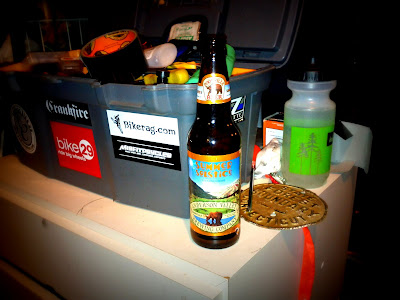 Stephen brought a tasty, post ride libation, that went down smoothly.  It had a sweet taste to it that reminded me of Malz Bier (beer) that I tried in Germany once that has molasses in it.  I never liked the German version but this was pretty good. 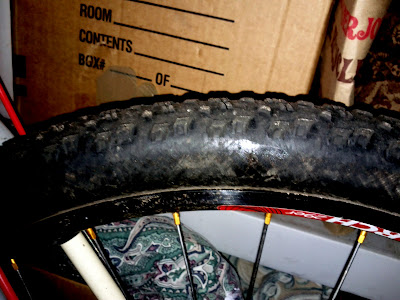 Looks like I finally ripped the side wall on my rear tire.  I hit rock on Daffy Duck that made a big sound tire sound and later down the trail felt my rear tire getting really mushy.  I put more air in the tire to get me out of the woods but it wasn't till I got home and using my floor pump discovered air leaking out of the side of the tire.  The funny thing was I held my finger to the tear and it felt wet, must have been the Stans, and then it sealed itself!  Hope it stays.
at 6:44 AM