Wistful and Wet at Waldo 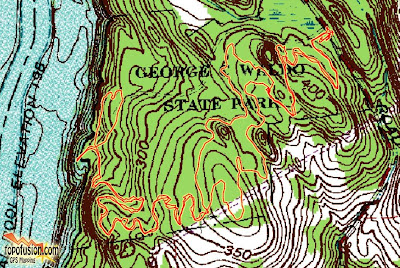 Having Tuesday's ride rained out and work commitments the rest of this week not looking like I will have any other chance to ride I took a chance and went to Waldo Wednesday after work.  It was wet, but not muddy thankfully.  See what happens when you build a trail right, it doesn't get muddy and in fact it sheds water pretty well.  However, the roots and rocks, combined with wet leaves really made conditions less than optimal.  Add to that balmy weather and the air so thick I felt I was that rat in The Abyss that was breathing water inundated with perflurocarbons.  It was thick like pea soup!

Days are getting shorter and that means it's time to start using lights!  The first thing I noticed with the new Reba Dual SL was that I put the stem too high and it felt like I was riding a comfort bike.  It was really unnerving to ride so far up and it didn't feel right hitting up and overs.  Otherwise, the bike felt really, really good.  Steel is so real!  I think the Reba is perfect for this bike, much more so than the Manitou for some reason.  The ride was so plush it almost felt like riding a full susser.  I have to say, the new seat really worked out nicely, too.  I am going to lower the bars an inch and hopefully get out again this week.

Stephen was there with his White Labrador Maveric, who is a really good trail dog.  He will hang on Stephen's rear wheel except for an occasional pee or pooh when the need arises but then stops at nothing to catch up.  Stephen's friend David was there and interestingly enough we were all riding 29ers.  David was riding a Scalpel that unfortunately was having rear brake issues. 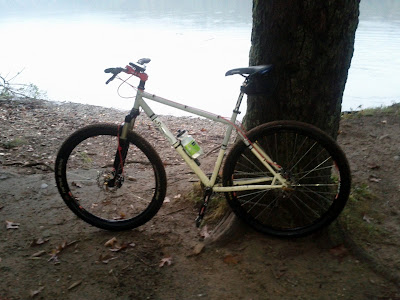 My A game was off due to the wetness and the high bars.  It just didn't feel right going over stuff but I still got a pretty good work out.  My HR monitor was acting weird and not sure if it was due to the increased humidity or something else but looking at my ride on Strava after the fact showed that I had a max HR of 255!  I think that if really happened my heart would have exploded.  Didn't set any records on this ride but I did fall a few times due to slippery conditions and glad that I was wearing protection!
at 10:07 PM