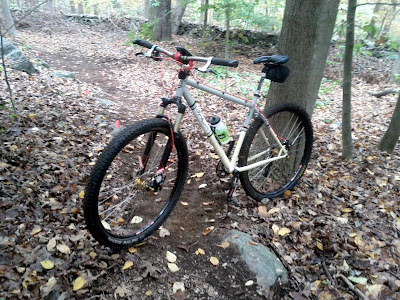 Monday's ride was beautiful!  The Spot Brand Longboard 9 aka On The Spot was dialed in!  In fact I am still feeling the good vibes even as I write this post.  The Rock Shox Reba RLT Dual Air is an awesome fork and compliments this frame perfectly.  It weighs in somewhere between 25 and 26 lbs and I love it.  The only thing I would replace the frame at this point is if I got titanium hardtail or full suspension frame.  I suppose there are other frames worthy of trying but the replacement to this one has to be a game changer.

Since I have added more road riding into my mix I have been a lot more conscious of what I should be wearing.  It was 55 degrees Monday afternoon and the only thing different was I added a long sleeve techwick under my blaze orange riding shirt.
I rode the re-route section by the Cleavage Roller and the roll out is perfect!  Still needs duff removal at both ends and that up and over needs ramping.  I realized later that there is a huge rock store nearby that I will have to go shopping at to find some nice flatties.  Probably won't get to it until the weekend of the 20th.  I hope I made it clear that I don't want people riding it but I am sure in two weeks time someone will have already ramped the up and over and fatty prints will be all over the place. 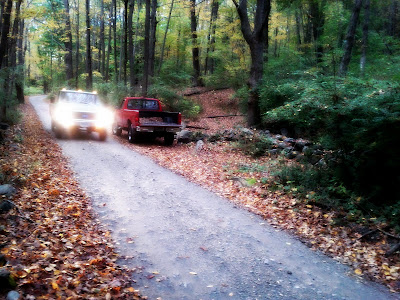 If you are going to ride at Upper Paugussett State Forest be seen and be heard!  There are hunters everywhere right now.  Wearing blaze orange or something bright is a must!  I ride with a bear bell, too.  Rarely do I see a hunter unless he is walking on the trail but they are out there.  Especially the Michelob Ultra drinking, leaving their beer cans in the woods variety.  Why can't they drink at their vehicle and leave the cans there rather than in the forest?  I am glad I opted to ride down the Brody to find that rather than go down the Mulikin at not. 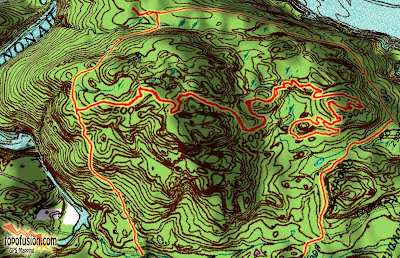 I took a little excursion on the white trail and found it blocked in numerous places.  The section through wet area has trees down on top of the trees that were already down from years ago.  There seems to be a go around forming but it needs to be cut back and opened up.