"Almost There!" - Garvin Dreis.  For those of you who are Star Wars fanatics you know who this guy but those of you who don't or didn't see Star Wars in the theater because you weren't born yet, he's the guy who is lining up the attack on the Death Star only to get blasted before he get's his shot off.  Sunday's Trail Building event at Huntington was the same and I am not sure if it was the early morning rain or whether the NEMBA eNews screwed up the date but the lack of people just meant that phase 1 of the project is "Almost There!" 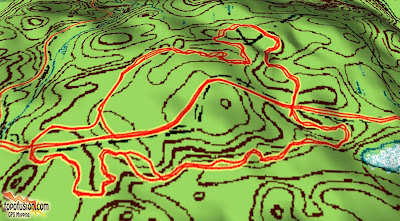 The lack of people didn't deter me and I was able to get a lot done.  Granted, people are already poaching the trail and have been doing so since June when the trail was just pin flags.  In fact, after testing riding it Saturday to get a feel for it I created a new Strava Segment for it called South Park v1.0 South  and one for riding it north (South Park v1.0 North), to see who is poaching the trail.  I wasn't surprised to see who has been riding it.  I wonder if any of them ever helped on any of the work days. 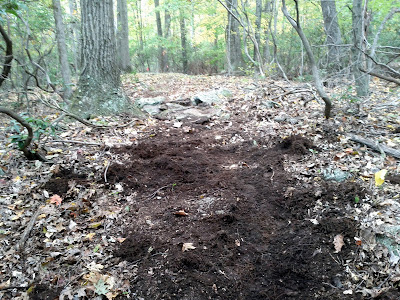 I started route clearing where a connector trails comes in off the carriage road, actually it was there first, probably as the access to these strange shelters built with sticks that are found here, like an Sweat Lodge without walls.  I found a pretty good route through the Mountain Laurels to the top of a little hill.  It's got a little climb in it but it's short and not too steep.  At the top though, there was a peculiar rock jumble with one sharp rock pointing straight up that couldn't be moved. 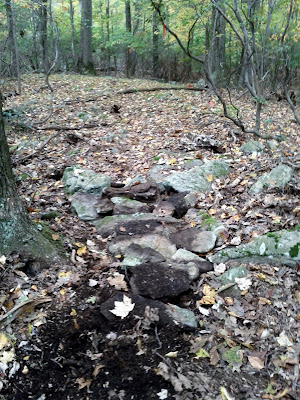 I created this rock armoring around the sharp rock.  It's funny sometimes how this works, ramping on one side was easy but on the back side no so.  Still, it's a nice little feature that mixes it up a big. 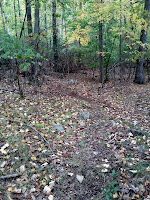 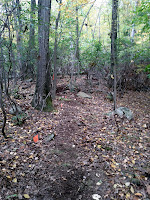 From there I continued clearing all the way to the trail head.  I removed duff on softer sections with intentions of going back and removing more.  The Rogue Rake is really good for that. 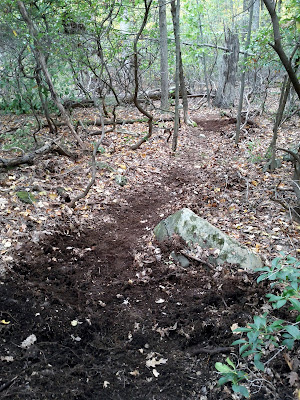 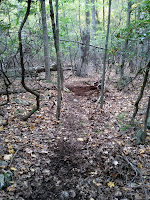 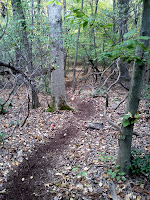 Probably go back and bench this section through the mountain laurels but since people will be riding it I just removed the duff so it's not so soft and will break in quicker over time.  That just leaves two more sections and it will be ready for prime time.  Some more benching on one of the steep side slope sections and some rock work on the top section, then it will be on to phase 2. 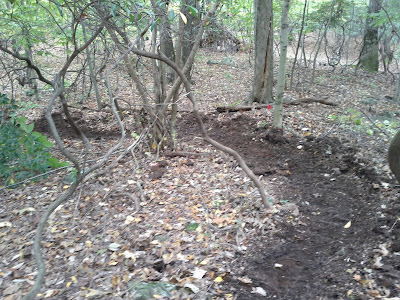