After any major storm the safest bike to ride in the woods is the Single Speed and thus I took the Unit out to check out what happened after the Nor'easter we had here in New England on the weekend before Halloween.  Unfortunately, I never got out right after the storm to see what it would be like to trying riding any of my current stable of bikes in snow because I was too busy trying to get my generator hooked up and coping with the fact that we were going to be out of power for a spell.  That spell is now 6 days and it might be a few more before we get ours back and the town is fully restored. 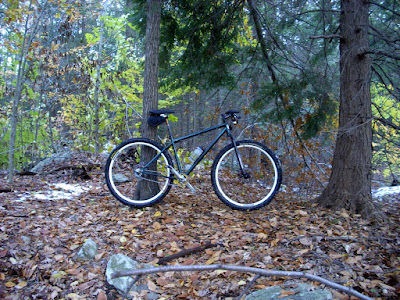 I haven't been riding the Kona for sometime because I started having knee pains and figured I might have been over doing it a bit, I was riding every day at one point.  I am also considering putting the Fox Fork on the Kona to see what it's like with a little squish but I will tell you one thing, I still love riding rigid, even after yesterday's trudge on the trails at Upper Paugussett State Forest.  Any where there was a tree with leaves still on it you would invariably find branches across the trail.  It took me two hours to do the entire 4 mile circuit!  If you would like to see more pictures of the damage, surf on over to the Upper Paugussett Blog and check out the Snotober Carnage post. 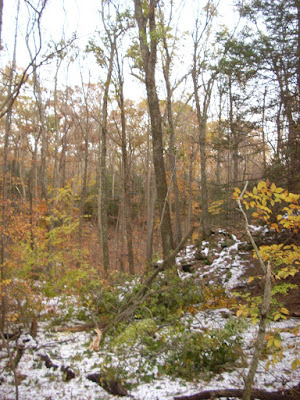 While I wasn't intending on taking out the Fall Line descent across from the Trail Re-Loc that Rick and I built prior to the storm, Mother Nature has done it for me.  About 90% of what has fallen down can be pulled off the trail.  I was running short of time so I did very little but if we have power this weekend, I will try to get out and clear things up.  If you would like to help, shoot me an email:  mark@cyclesnack.com and let me know when you are available.  Shooting for a Sunday clean up at this point.
at 5:51 AM