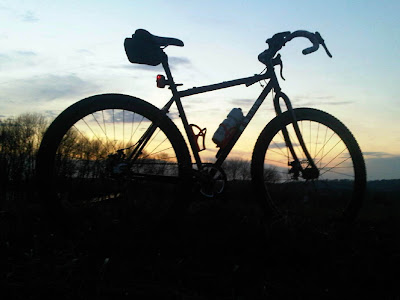 Things were not quite right on the Qball Saturday evening as I was prepping it for it's inaugural Monster Cross ride, these Origin 8 rotors I bought are crappy so I to switch out the rear rotor for an older model Avid and also added a Surly Tugnut to the drive side, too.  It's kind of overkill to have two bottle openers on one bike but at least now you can open two beers at the same time, on both sides of the bike.  Sunday morning I ended up switching out the front rotor, too, and then spent another 1/2 hour adjusting the brakes - BB5s suck!


Too many things going on today to get out and enjoy the warm weather so I had settle for an afternoon ride. Fortunately, I had the foresight to charge the Light and Motion because where I was headed I knew I would be needing a little illuminated assistance.  My gearing choice (44:18) turned out to be a little tall for some the climbs but then again I chose this gearing for rail trails and didn't think my first Monster Cross ride would be a dirty road ride, so I just crawled up some of the stuff.  I think, however, for one of my Shepaug Monster Cross rides (coming soon) I am going to go to at least a 44:20 or even 44:21 because there is some monster climbing involved on those routes.

First dirt was Pond Brook and the fatties were loving every minute of it.  A special treat followed, more dirt after the intersection with George's Hill because the town is repaving a section after installing drainage.  As usual, they have fallen short of fixing the rest of the road that is probably one of the most uneven roads remaining in town that's not dirt.  Hopefully they'll throw a layer of black top over that section.  Hooking back Currituck and heading toward the Flagpole I was lured off the main road by the sight of gravel on Signal Post Road only to find that it turns into a private drive after 10 yards (stupid) and just ends.

Got some more dirt on Deep Brook Rd and then it was over to Fairfield Hills and up the Recreation Trail.  At the water tanks I banged a right and started down the trail.  It started out as crushed asphalt and slowly gave way to dirt and got narrower and narrower until I was riding singletrack.  Not what I was looking for with this gearing but the trails were blown clean of leaves and this section was flat.  Then it was out onto Mine Hill and down to Sandy Hook.

It's been a few years since I last rode the gas line/old rail line from Walnut Tree Hill to Echo Valley.  Initially, there were a few trees down but they were passable but on the other side of the Winery is where it got much worse.  Quite a few trees down blocking the entire route.  The ATVs have already rerouted around them but riding those goarounds with basically road gearing proved impossible.  The last section, closer to Echo Valley, was completely blocked and then after that blockage it's so soggy that I couldn't pedal through it.  It was awful.

As a Singlespeed Monster Cross, the bike is really in it's element.  Granted, singlespeed and rigid is what the Qball was initially designed for but using the Soul Cycles CroMo fork improves the over all rideability of the Monster Cross platform.  The forward rake tends to rattle under heavy braking, which is where the Qstick was better, but I think the forward rake gives the bike a better ride in more technical situations.  What can I say about Wood Chippers except they are fantastic.  Four hand positions and wide enough for the stability leverage needed on trails. 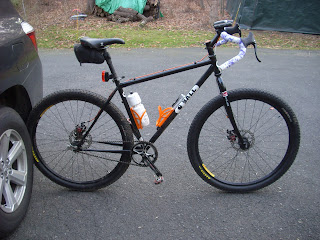 My tire selection was limited to 29x2.1 Nano Raptors, 29x2.1 CrossMarks, or 29x1.95 Kenda Klaws, short of buying more tires.  The Klaws are really off road tires and I have tried the Nano's before but figured the small block pattern on CrossMarks would be really good for paved roads and they were!  There was very little knobby vibration and noise while descending big steeps and absolutely no drag while climbing.  For this kind of riding, though I might go back to my Kenda Kross tires, or another pair cyclocross tires I have sitting around that I have never tried which I will have to throw on for a Tribury Gravel Grinder or a Roxbury loop.  Any Shepaug riding, though, I think I am going with the CrossMarks.
at 5:00 AM

That last stretch to Echo Valley is really wet and it's been years since I rode the old RR bed west of Hanover Road, and the Newtown side of the old Shepaug RR bed has got to be FUBAR after the storm as well.

If you have the time and it's not too cold you should try riding in Roxbury with me sometime.