If I only had a chainsaw 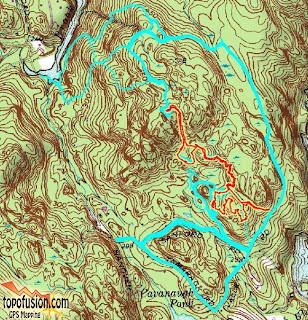 With a chainsaw it would have made my effort much easier but I did it the old fashioned way with a hand axe, pruning saw, and clippers.  It took me approximately 4 hours to do everything that I did and as you can see on the map there is still a section the on the Gussy that still needs to be addressed. 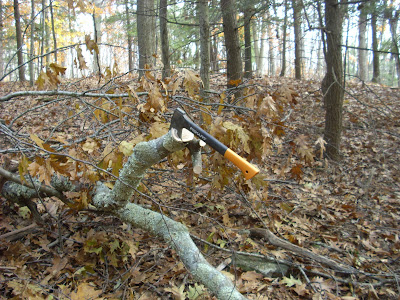 I also had to do three re-routes: one at the Blue Cross Roller because there is limp sticking out into the trail that was too big for me to move.  The resulted in creating a new drop/roller going around it.

Another re-route further up on the Gussy between the two stream crossings and another just south of the new re-route, which by the way is now the main trail because there is a lot of debris that now blocks the fall line descent portion of the trail.  It's not the best re-route but I am sure it will break in over time.

The angled up-and-over is toast, too, so.  I hate to say this but I am glad it's gone because I hated it anyway.  I could never get enough speed to get over it while riding up the Gussy.
At first I thought I was going to have to put in a re-route on the re-route but after cutting and chopping the big branch that fell on the trail I was able to move it enough so that the original benching is accessible.  The only section I didn't do is the last 1/4 mile north of this.  From what I can recall there are two sections that are blocked.  I am going to ride in Sunday and try to take care of them.  As for the Poly Brody, I won't be touching that until I can get a chainsaw or the state does it for me, which will probably be quite some time. 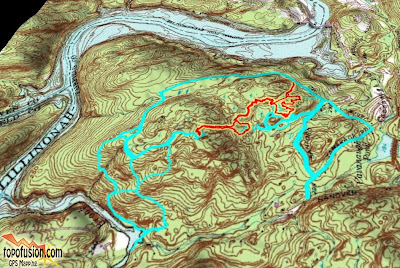 One word of caution, if you are going to be in the forest on Monday through Saturday, beware of hunters.  There were three trucks in the parking lot Friday but I didn't see anyone on the Gussy Trail.  I did see some some guy hiking the blue trail and then when I returned to the lot around three there was a couple with day packs that looked like they were either going geocaching or actually going to camp out over night.  They were acting kind of secretative/aloof which led me to believe they were geocaching.
at 9:18 PM