Running Errands on the Bike!

Had to find a diversion for Brodie today while Michele took Elliot and Katie to a neighbor's child's birthday. I spent the morning switching over to the matching FIR rear wheel. Adding spacers to the shimano style hub and a 16t cog. Been riding 16t freewheel so long I figured why stop? After a few attempts at chainline and getting the QR tight enough, finally got it set up.

It was really weird getting back on the bike and riding freewheel after two days of commuting with the fixed gear. Quite a few times I had the hesitation that I couldn't coast and had to keep pedaling but then realized that I could coast and coasted. Hard to describe but it was like when I am riding fixed and I have the momentary need to coast but realize I am fixed and can't so I keep pedaling. So it's like that only with the added thought of, Oh Yeah I can coast!

The climb up out of the Housatonic River Valley started OK but on the incline past Butterfield I heard the squeak again! Now, I can't figure what's making that noise. It happens only when I am applying pressure to the left hand crank and sounds like it's coming from the back of the bike. So, it looks like I don't need to repack the bearings on the track wheel after all.

Brodie and I went to the drive up teller at the bank. He had fun pushing the buttons. We got some cash and headed back out. 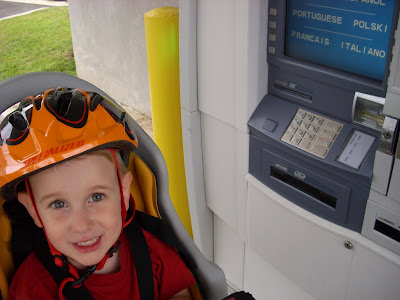 The only thing to do next was to get some ice cream. Of course, when I ordered a small cone for him it was as long as his forearm. It lasted about 10 minutes that way until I had to put it into a cup, otherwise it would have been all over him and me. 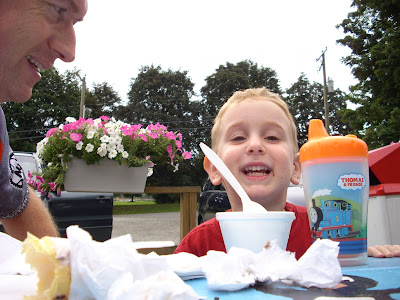 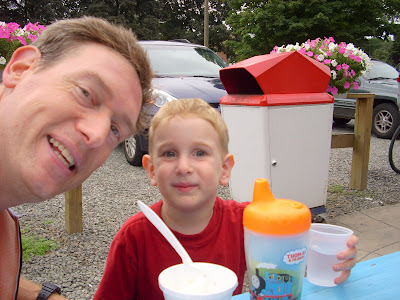 On the way home, I ran into a new aquaintance and possibly future riding buddy, Rick, and we chatted until it started to sprinkle. Brodie and I hit the road and it started to rain a little harder. We zoomed down the big hill on Hanover and usually he tells me, "Daddy slow down! Slow down!" But he wasn't saying anything. We were going to ride to the lake but I couldn't get an answer out of him, so I stopped at Bramble Trail, turned around and found him fast asleep! So, we went home. 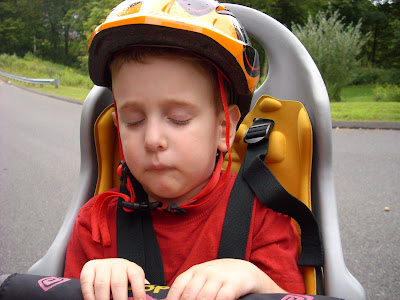 great pics, you son must be having a blast. By the way there is a virtual coasting method that you will soon find your self doing on the fixed rides. I find if I really relax my legs and just let the cranks pull them along it is somewhat like a coast.