The morning commute started off with a few hiccups.  All the work that I did last night didn't fix the squeak.  In fact I think I made the bottom bracket cup too tight because I could feel the bearings grinding a bit.  Since they had fresh grease on them, I figured they would be fine until the weekend.
I have been leaving later, mainly because I don't want to ride in the dark and I don't have my light figured out - namely where to mount it.  Hitting the road at 7 works if I am taking the short route but this morning I wanted to try Route 302 fixed and on the way I got stuck at every light.  Including a stuck tractor trailer on Queen Street.  In the picture below, turned around and shot a picture of the line of cars behind me waiting for light at the bridge construction.  Way in the back is a Benz that probably got popped for going to fast. 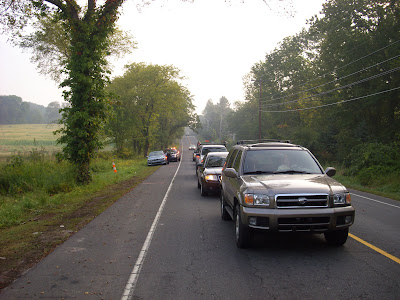 Below is the construction on Rte 302.  It took these guys all summer to do one side and now they are doing the other?  Same thing over in Bethel.  I was last in line when I got caught by the light making me first for the green.  I recognized the driver of the car next to me, Kathy Herde, a local mountain bike downhill racer who works for Cannondale that I have ridden with on occasion.
The ride in took an hour and ten minutes.  Nice route, especially for fixed gear.  Need to leave earlier and pick a different way over to Route 6.  Trying to be the law abiding citizen that I am and obey traffic laws, there is one stop sign at the intersection with Hawleyville Road and Walnut Hill Rd in Bethel that is killer.  It's killer because if you come to dead stop, then you have this enourmous, short climb that just kills at this ratio. 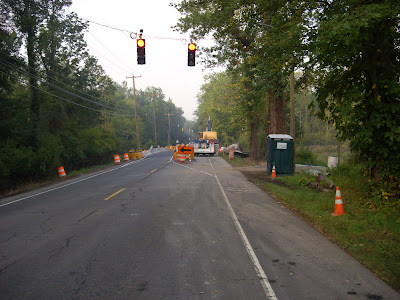 Wanted to take 302 home but family obligations meant I had to get home ASAP.  So it was the short route home.  Traffic on 84 was usually slow and I think this is because of the merge from three to lanes.  By the time I hit Old Hawleyville Rd in Newtown and cross over the highiway for the fourth time, it's usually moving. 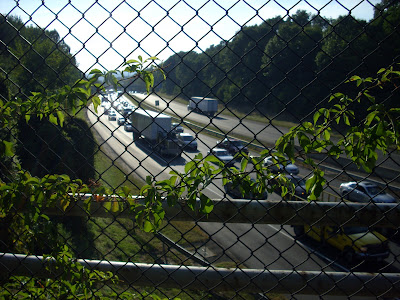 Made a little video talking about the ride and what I have learned from riding fixed gear for the commute both days this week.


The Friday Fixed Report from Mark on Vimeo.