Newtown is the only town in the State of Connecticut that puts on a Labor Day Parade.

Due to the ages of my two young sons and their attention spans, we usually don't go to the Town's Labor Day Parade. However, my daughter was marching in the parade with her dance team, and so with the help of the in-laws we got a spot on the side of the road and waited for the parade to start.

One thing I immediately noticed was that the parade seemed to draw many people on bikes. Later, when the parade got started there were more people riding bikes within each of the groups that passed by. One thing became apparent, many people ride crappy bikes and give their kids crappy bikes. I saw one older gent (without a helmet on) riding a Lightspeed hardtail, there was another guy (with a helmet on) riding a Trek 800 hard tail, and there are two Turners in one of group of marchers, but that was basically it. It seemed that parade drew a plethora of crappy bikes.

The one exception and I am not sure this is a quality bike - you be the judge - but there was a Newtown Bicycle Cop on a Smith and Wesson Mountain Bike? Do they make quality bikes or did the town government get a good deal because the company was fulfilling some government order using Homeland Security Funds. I thought Trek was the main supplier of Law Enforcement rigs. I overheard the Bike Cop say proudly that she actually went to factory to pick it out and watch them assemble it.

So here are some pictures of the Bike Cop. I think she really got a kick of riding up and down the street telling people to get back from the street. Frankly, she should have been chasing down the kids that weren't wearing helmets and have them walk their bikes. CT Statutes states the following:

Sec. 14-286d. Bicycle helmets. Children. Renting bicycles. Public awareness campaign. (a) For the purposes of this section and section 14-286e, "bicycle" means any vehicle propelled by the person riding the same by foot or hand power.

(b) No child fifteen years of age or under shall operate a bicycle on the traveled portion of any highway unless such child is wearing protective headgear which conforms to the minimum specifications established by the American National Standards Institute or the Snell Memorial Foundation's Standard for Protective Headgear for Use in Bicycling. Failure to comply with this section shall not be a violation or an offense. Failure to wear protective headgear as required by this subsection shall not be considered to be contributory negligence on the part of the parent or the child nor shall such failure be admissible in any civil action.

And I like how there plenty of kids riding around with out helmets. Granted, it's the parents that should get slapped with a fine. 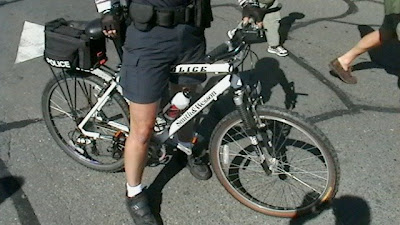 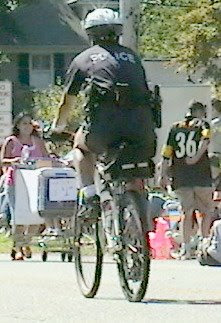 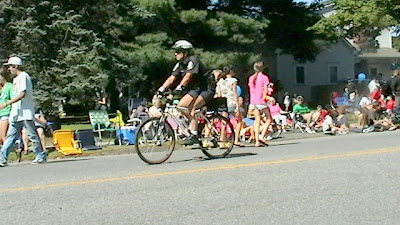 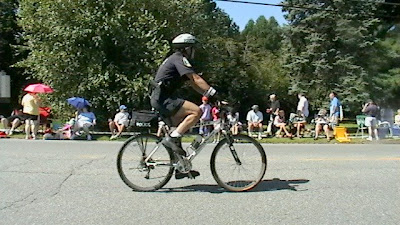 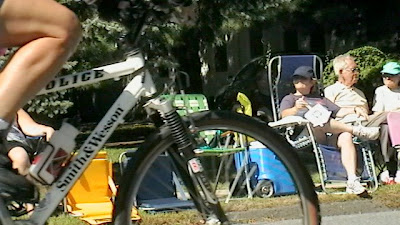 I can't believe the amount of people that I saw riding without helmets. As you can see from some of the pictures below, there were plenty of kids without them that look like they were under 15 years of age. Most of the kids riding around on BMX bikes didn't look old enough to drive, and of course there were many adults riding without helmets. Not to mention a few roadies sporting some major bling on two wheels not wearing helmets.

The casual riders, I won't call cyclist because that term should be reserved for someone on a bike that has some inkling of cycling safety, no I would call them people riding bikes. But there were plenty of people setting the example. So what, if you get massive helmet hairdo, one fall on your head to the pavement and it's all over! On the trail it's a different story. People riding on trails without helmets, they are Darwin Award Candidates. 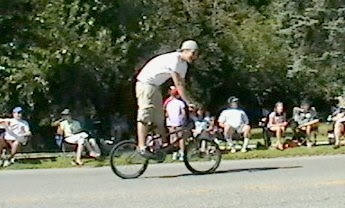 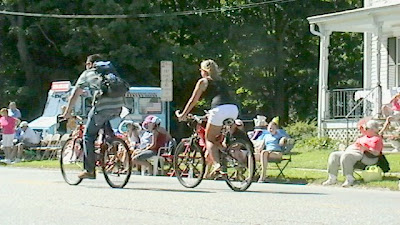 The kid below was not wearing a helmet 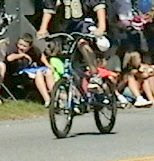 These kids are not wearing helmets either. 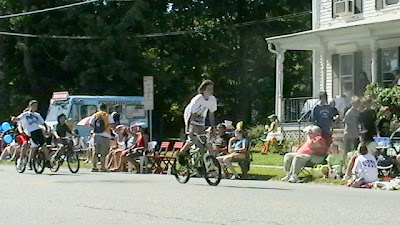 Same with these. Some of you may think the way they are riding is illegal but according to the state statutes some braniac repealed that law. 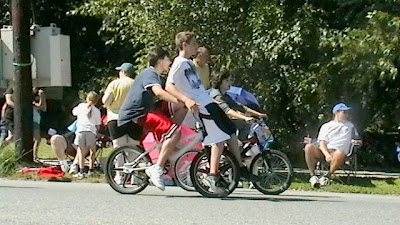 Finally a kid with a helmet! 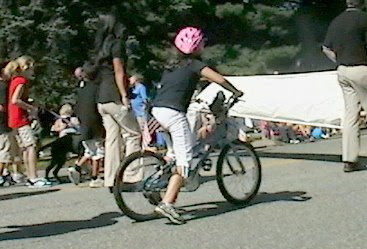 I believe these two kids were not wearing helmets but they are both on Turners, which is a step up from the rest of the bikes were riding. 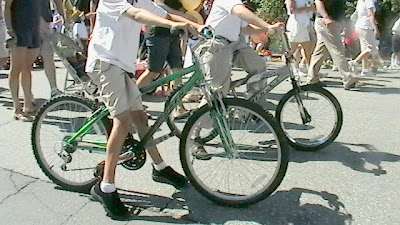 No brains, I mean helmets here. The bike below in the foreground is a Mongoose Comfort Bike. Not sure if you would classify that as a quality bike. Apparently Mongoose makes really good bikes, and they are famous on the BMX circuit, but what you see most people on these days seems to come from the big box, not sure if it was assembled correctly, stores. 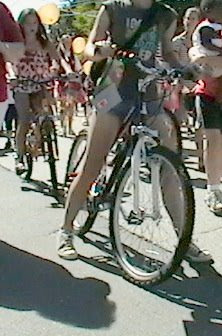 Guess what? More crap! Although the yellow bike in the background, while I can't tell what it was, appears to be steal and that gets points in my book. 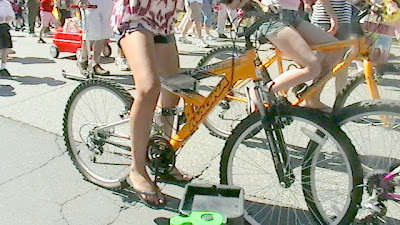 Of course the positive points are negated by the fact that the person on that bike didn't have a helmet on. 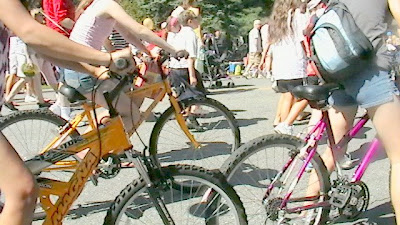 Do you think that kid in back is older than 15? 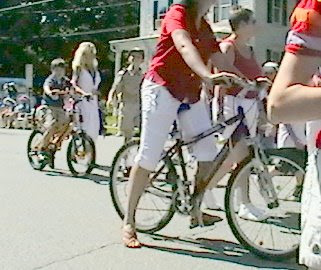 Not to mention he is riding a Hummer? Sounds like the Smith and Wesson. 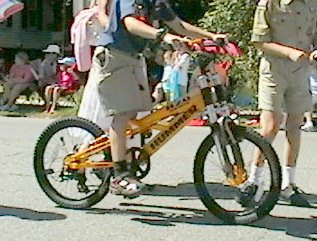 I know you can't really tell but this is another Mongoose Comfort Bike. I marveled at how many people had the same type of bike in the same red color. 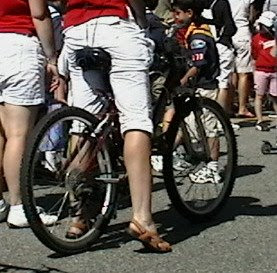 Ten points for the kid in the blue helmet! 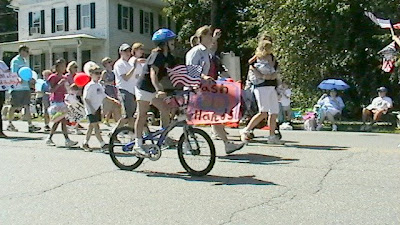 Female Bike Cop from above needs to ticket this kid's parents. 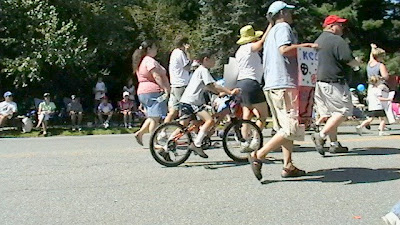 There were a lot more bikes as I mentioned earlier. Some people with helmets and many without. Clearly the town is not doing enough awareness training when there is state statute that says that is supposed to happen. I know I might sound overly critical but hopefully, with all the recent interest in saving gas and cycling, people will take more of an interest in what they are doing when it comes to cycling. Like operating a car, cycling can turn dangerous if you are acting irresponsible.
at 6:23 AM

Email ThisBlogThis!Share to TwitterShare to FacebookShare to Pinterest
Labels: Parades

i didn't wear a helmet this morning on my commute on my new (to me)crappy 60 year old 3speed.

or last night to the bar.

you are very, very vocal and critical about about helmets...why so much? just curious, not trying to flame!

I gotcha. You are young, get a few drinks in you and you are bullet proof! I used to be like you - lived in Germany, rode a bike everywhere, even had a crash, at night, while loaded, and hit my head, and still continued to ride without a helmet. But I was young back that then, too.

I think it's important to set a good example when riding in public. At least for the kids. I have three kids of my own and I think that is why I am a bit over protective in this arena.

However, you are flirting with death everytime you ride without one. It's analogous, I think, to driving with your seat belt on. Most times you don't need it but then comes that one time you do and then what?

As for the commute, wore my helmet today and I didn't think nothing about it. So I don't look hip riding my 20+ year old fixie but I know I am safe.

So, what ever you decide, just be careful. The last thing you want to have happen is to have you name in some paper as a bicycle fatality.

The helmet debate is a fiery one, just go over to Bike Forums and search it, thread upon thread of maelstrom and hate. Regardless, I always wear a helmet if Im on my road bike, if im going to have a couple beers, or if its raining/snowing. I stopped wearing it for my short commute on my tank of a Univega but ended getting yelled at by the g/f so I started wearing it again.

thanks for the answer mark. i grew up before child safety became what it is today. i rode without a helmet and explored the woods alone. but i guess times have changed, and the location is different. i certainly understand and respect your parental view, but it seemed a bit much, but its all good. i am really glad we can discuss this like this, very different from the courant.com boards!

i like the wind in my sweaty hair. i have loved that since i was a kid, it ain't changing! i like looking like less of a target in the ghetto. it has nothing to do with "looking hip"!

Come to hartford on sept 13th for the Discover Hartford Bike Tour in the morning, stay for the Hartford Hardcore 4 alley cat that night. i'll be riding far too hard and fast in the city on my Gunnar and of course...wearing a helmet!

i don't think i am bulletproof. i think i make good decisions based on the ride and the conditions. i always wear it on longer road rides where i'll be in fast traffic and hitting 30/40 mph on hills.

Go to a backpacking site and check the arguments about winter solo hiking or even just winter hiking on a regular site. lots of opinions and comments about "flirting with death" and taking a "big" chance.

its a personal choice.

and seriously dude, come to the city for a day of bicycle revelry on the 13th!