Let there be Light!

Got up at Oh Dark Thirty this morning for a Ride before Work and thought that it would be an excellent opportunity to test the lighting system that I got for Christmas.  Yeah, a little slow on the uptake - this sat on my work bend for 9 months but now that I am riding to work again and will need a light I thought I would give it a try off road.  Hopefully the weather will hold until the weekend because it's Oktoberfest!
The 4th Annual CT NEMBA Biketoberfest ride will take place on Friday, September 12th at Huntington State Park in Redding.  This year's Biketoberfest will be a RAW ride, Ride after Work.  The Fest Tent is up at Old Heidleberg, so whether or it's raining, either way, I am a celebrating Oktoberfest this year.
Also, rode the Qball for the first time in I don't know how long and I have to do something about that 22t in the rear.  It was nice getting out on it again.  So smooth and quite.  Having the Zoke upfront and the 2.2 Bontrager in the rear is like have a Fully, I would imagine it's almost like riding a Dos Niner.  I think what's happening to my stable is that the 'Horse comes out for what it's made for, All Mountain/Trail Riding.  Doing a quick Echo Valley Loopy is overkill for an FS bike like the 'Horse but the Qball is perfect for this kind of riding.  Of course, if I am going to throw in a broader ride including the a visit to the Kissing Oaks, then the 'Horse is a must have.
The other filly in the stable that hasn't seen any action all summer is the Fixation.  If I am able to sell the Bianchi at a good price then I will need another commuter and I am thinking about using the fixation as a winter commuter.  Right now, I looking around for a good deal on a 26" rear wheel with a flipflop hub.  Once I get that, then it's a matter of putting fenders on it and seeing if there is someway to mount the Topeak rack on it.  My plans for convert my Fuji Royale to an SS/Commuter are also on hold because I am thinking for rebuilding this with a Campy group set into a touring/commuting rig.
The lighting system that I am using is Light and Motion's Solo Logic.  I spent quite a bit of time last year researching lights that offered what I needed for off road and commuting and this one was the best value.  What's cool about it is that the battery fit's perfectly in the media pouch of my Camel.  Finally I have found a decent use for this feature. 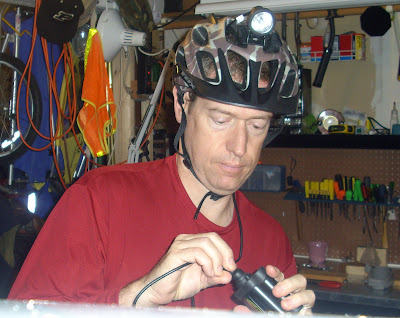 Tried to take a shot of me riding with the light on - it sort of worked.  It was funny though, I ended up leaving the house at 6:15 AM and didn't really need it but it was worth the effort to give it a try. 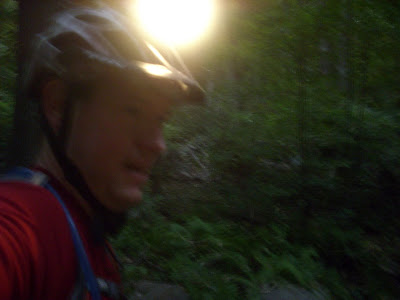 Of course, stopped I look better with the flash on.  You might notice that I am wearing a long sleeve jersey because it was cool out this morning, 50 F (10  C) . 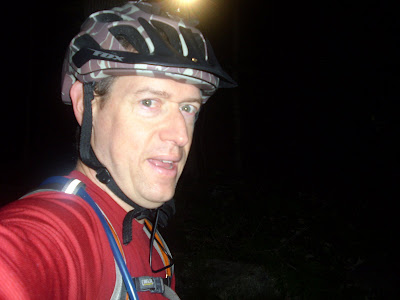 The first part of the Gussy was business as usual, however, one area that needs some attention right now is in that swale area that is before the part in the trail that gets really technical.  Another frame of reference is there is a big rock on the eastside of the trail with a large tree positioned afterwards, which I am planning on turning into a skinny/long up and over.  I think the next trail building day will concentrate on this area and the slope coming down to it, as well!
I found this rock cairn along the trail.  This is a good sign because it means hikers have also found the trail.  There is another cairn further down on a tree suspended above a stream.  Look on the Upper Gussy Blog for better pictures the cairns a little later today. 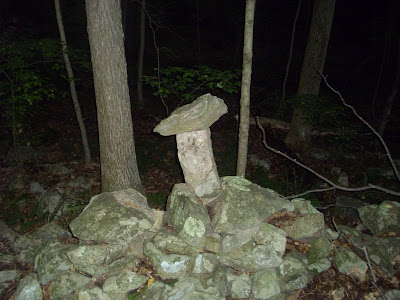 I was making pretty good time until I hit the Wet Spot because I finally had a chance to take a good look at the work Tom did during the last Trail Building day to open a path for the horses.  It needed some tweaking so I figured I could spend 15 minutes working on it.  Check out the Upper Gussy Blog for better shots of this area a little later today.
at 8:04 AM