Yes, it's Orange Season again. It's that time of year to start wearing blaze orange if you intend on riding Monday through Saturday in forests around the State of Connecticut. Hunting season starts as early as September 15 in most areas. Fortunately, you can't hunt on Sundays and most State Parks, although Bow Hunting is permitted is some.

My latest edition to my collection of orange clothing is this pair of Dakine Gloves. I got them at the Fairfield Eastern Mountain Sports (EMS). Don't think I will ever wear orange pants but now I have gloves, helmet and plenty of shirts. 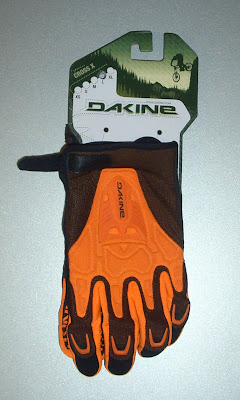 Not only should you wear blaze orange but wear a bell on your camel or somewhere on your bike. This announces your presence to hunter hiding in the woods. He'll see you first before you see him, most likely. Also, remember to not wear anything white because that can be mistaken for a dear's tail.

Here are links to the various hunting seasons:

Deer hunting starts as early as September 15. Even though there is no hunting on Sundays, please be careful because you never know who might be lurking out there at this time. Also another tip during dear season, avoid wearing anything with white in it. That piece of white clothing could be confused with the white tail of a deer running through the woods.

Great advise. I wonder if my white frame is a possible bulls eye :^(

I've got a "Tang" colored Niner MCR. That would be perfect.