Spandex provides no protection from mosquitoes!

Took the diSSent over to Upper Paugussett for a quick RAW.  There was crap dumped in the parking lot at Echo Valley again (a$$holes!) and none of the blowdowns on the Poly Brody have been taken care of.  Then again, I don't think anyone has notified the State of the issue (oops).  There is a go around already formed on the big blowdown and the other which is on the back side of the climb up to the Mulikin Trail is actually challenging but it will need to be moved.  I would have liked to have done it but it was unbelievable buggy out. 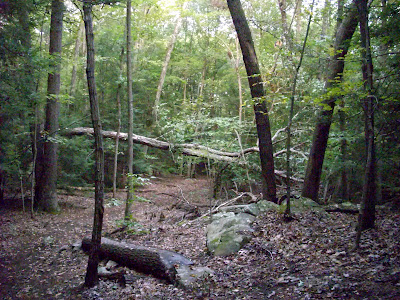 With remnants of Tropical Storm Irene still present, Tropical Storm Lee also left her mark.  I am not sure if it can truly be called a blowdown by the looks of the way this tree fell, more like a weight down.  Most likely it was cracked from Irene but the weight of the water from Lee is what must have brought it down.  The irony is just the other day I was thinking about rerouting the trail here anyway so that if rolled the skinny (or not) rather than making the turn to the right I want to go straight then up the slight incline and then play on the rocks a bit back there before tying back in with the benched section of the trail as it descends towards the make shift deer blind. 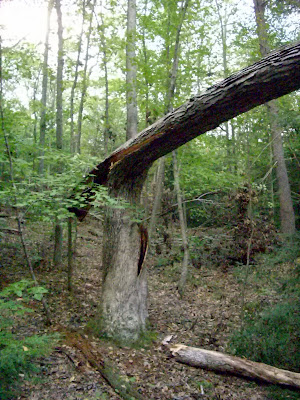 Improving that corner has also been weighing heavily on my mind and I think I want to straightened it out a bit and make the turn wider, perhaps even berm it.  Never-the-less, I don't think it's safe having the trail run under this tree the way it is right now.  At some point it's going to fall down.
at 6:59 AM

Soon my extended summer gigging season will slow down and I'll have some time to help with maintenance on the gussy. Looks like a lot of work to do. Lets try to plan some time get it done.