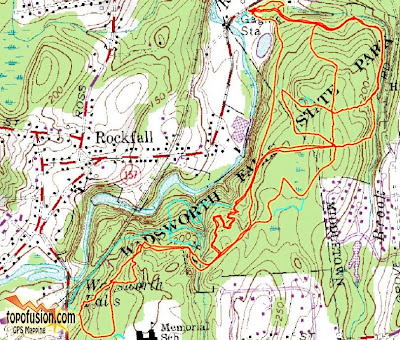 Nice ride this evening at Wadsworth Falls SP in Middletown.  Paula, Al, Art, and myself, all riding 29ers, can you believe it? We set out on a nice leisurely ride hitting the yellow and blue trails, the red trail, wrapping around to the south west on the Taco Bell Trail (I call it that because you pass near a house that looks like a taco bell restaurant - Mission Style with red Spanish tiles) and back towards the main part.  On the way back we took a rip down Alex's trail, a must ride at Wadsworth.

Paula broke off to get the pizza for the CT NEMBA board meeting that we were going to have later that evening and so we want back for a second helping.  After passing an equestrienne we were headed back into the yellow trail when disaster struck, Al ran over a big stick that then got sucked into his spokes and caused the rear derailleur to get wrapped around it.  He was able to get it out and he started walking back towards the lot when he figured he could probably still ride out on one gear.

Caution kiddies don't watch this video if you are at all squeamish and can't stand the sight of broken bike parts. If you want to skip to the gory part go to 0:27 where you see Al hit the stick and then at 2:02 he starts walking out.  At the end of the clip he realizes that he can ride out if he stays in one gear.

Afterwards, Art and I took another loop.  We were looking for the Gravit Cavity but never found it.  We rode out and hit Alex's trail again and passed that same Cyclocrosser that we passed earlier on the same trail. I am loving the diSSent more and more as a geared bike.  Who knows, maybe its just having gears that makes it fun but I am really digging the bike now that I have gears on it.
at 7:08 AM

Damn those derailleurs!!! Damn them all to hell!

i don't know, Mark, i think you got wayyyy too close to disaster riding inbetween that pair of trees!

Ride through those trees all the time. That is a great trail up and down.