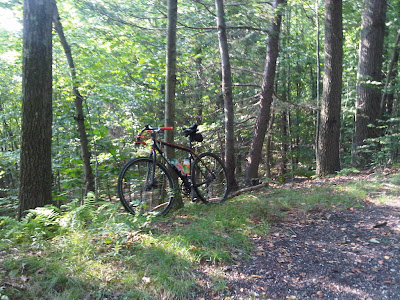 The Qball Monster Cross was looking sweet after getting it back from the LBS.  I had the front derailleur adjusted so I could ride with three rings upfront.  Originally, I was going to do the Tri-Bury Gravel Grinder but didn't leave enough time so I did an out and back on the Larkin Bridal Trail.

As flat as this trail is I basically road the whole thing in the outer ring.  Bike was running really nice, however, I was having a little issue with the seatpost sliding down on me.  I think I am going to ditch the Salsa Flip Lock and use a regular collar. 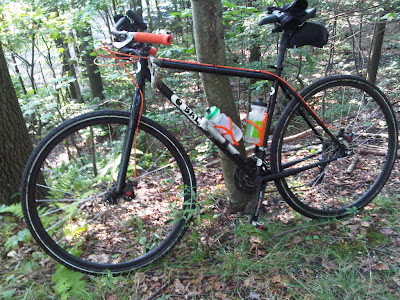 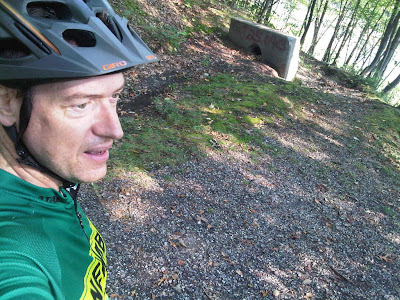 I was amazed to find this rare cousin of the Mongoose Deception, a girls mountain bike probably purchased from a big box store and by the looks of it is an endo waiting to happen.  If you look closely you will see that it suffers from what I would guess is an in-store assembly by an equally less than capable person characterized by the backwards fork.  Perhaps that is why it was abandoned.  Hope no one got hurt. 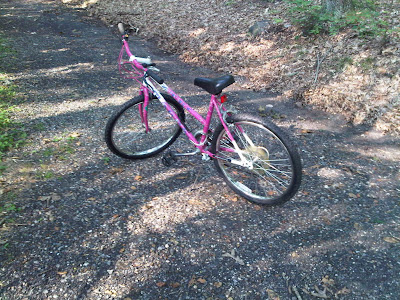 Lots runners on the trail and a few guys on Mountain Bikes riding without helmets, NICE!  A little mud here and there and the usual wet spots were wet of course.  Right before Towantic Road there is a huge, deep puddle that is best to just right through the middle of rather than try to ride on the side where it's muddy.  Crossed paths with some roadie dressed in all white and on a white bike near the airport.  He actually gave me a head nod!  Compared to his virginal wedding dress attire I looked like the Creature from the Black Lagoon.
at 1:16 PM

I wish my Mongoose was up and running. I would have joined you.

Your Raleigh would have been fine!