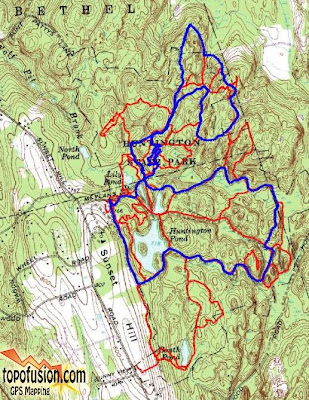 I was all set Thursday to volunteer at a Cricket Match (for work) down in Norwalk, finish the day at the Norwalk office, and then head down to the Red Barn on Merribrook Road for my annual tour of Mianus.  However, the rain storm unrelated to the coming of Hurricane Irene showered lower Fairfield County pretty good forcing my tour guide to cancel the ride.  Apparently, the slightest bit of rain makes Mianus muddy.  The rain also canceled the Cricket Match and thus my trip south.  The Danbury area got some rain but it wasn't it didn't rain long enough to the turn the trails to mush.
While getting ready at the Old Dodgintown lot this guy rolls in and asks me where we are riding?  I told him I am riding the northern trails and that he welcome to join me, that is if he doesn't mind riding with a rigid, singlespeeder.  He said he didn't mind at all.  The first bit of singletrack that cuts over from the Red Trail (carriage road) to the lower Dodgingtown lot gave us a pretty good look at what the rest of the trails would be like - nice!  The rain solidified the dry and dusty trails that were reported in the CT NEMBA Trail Ambassador Report but the rain also made the rocks slippery.

Apparently, Junior has been riding the southern section of Huntington and have never been to the northern sections.  He was loving the Big Burn when we ran into some of his friends that had gotten here earlier and were already out riding.  They rode with us up the blue trail for bit but then turned around because they had already ridden for a couple of hours.  So Junior followed me out to the to the northern reaches of the park.  I took Junior up the Blue Trail back towards the AT&T cable and I almost made the climb, that freaking tree at the end with the roots gets me every time, but Junior cleaned it!  I have cleaned it, too, just not on a singlespeed.

Got to check on the new bridge by the Rusty Truck.  It's really nice.  Smooth trannies on both sides and a little rock feature on one end.  Thanks NEMBA!  We got back to the Lower Dodgingtown lot we parted company.  I told him I going to ride out on a fast paced loop on the carriage roads to get a few more miles, by this point we had ridden 3.5 miles, and I guess he wanted to hit some stuff he was more familiar with.  We traded numbers and took off in separate directions.  Apparently, Junior rides Wooster Mountain a lot and I think I am going to have to try to meet up with him to see what's going on there. 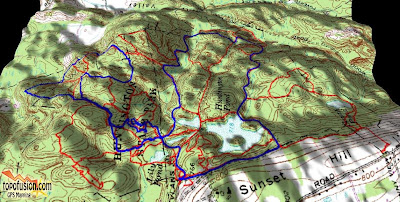 I am glad that I kept the Blunts on Kona because except for the Big Burn, everything else at Huntington is pretty rocky and rooty.  The bike performed beautifully and it's such a joy to ride.  Riding this bike is Single Speed heaven!