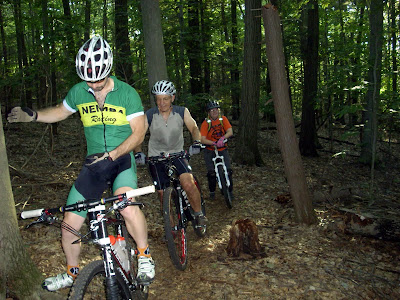 Took the Kona to Wadsworth State Park Wednesday evening for the Monthly CT NEMBA Chapter Meeting ride.  I figured the current wheelset would be fine even though there is some technical riding, it's really not that difficult and the bike would do fine.  I am planning on using the Blunts that I had on the diSSent, shoed with my Panaracer Rampage tires, for more technical riding. 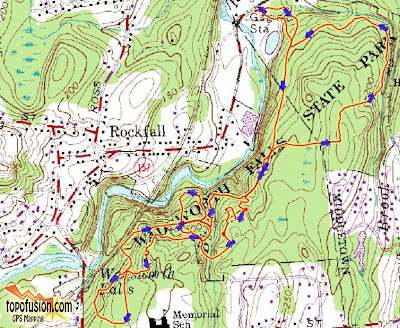 As I mentioned before, Wadsworth is pretty easy for New England riding areas and it reminded me a lot of Glacial Ridge just no sand and many more rocks and roots to ride over.  The other big difference here is a lot more climbing and the Kona climbed those hills like a horny mountain goat!  UFB!  What a difference  in   having such a light.
Having arrived late, as usual - its funny how I can never get out early to meet the ride's start time, Mr Murphy might be at work here, so I rode up the Orange trail to Alex's Trail and met the gang half way up.  Then we climbed up the trail to the Red trail and that is when Paula decided to leave us.  She was the only one on little girl wheels.  Art was riding his C'dale 29er race bike, Al on his fully rigid, fully carbon GF Superfly, and Glenn was on his Monocog SS 29er.  It was basically big wheeled fest!
A little trail maintenance was performed on Alex's Trail. The downed tree was interrupting the flow so we collectively took care of it as a team.  We had a nice little rip, tried some different stuff, and then headed over to the meeting for pizza and beer!
at 7:01 AM