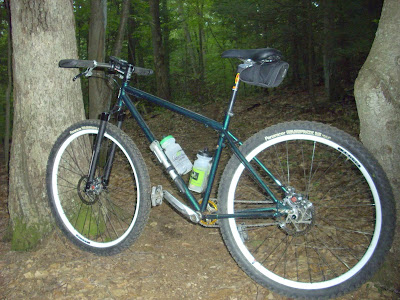 While my rear ZTR Arch is All Mountain rated it's the front wheel, ZTR Crest, that I am worried about riding on technical trails so Thursday night I threw Rampages on the Blunts and switched out wheelsets.  The nice thing is that I had another Surly 20t cog in my bag of tricks making the switch easy peasy, nice and easy.  Prior to going out, though, after work I dropped the Qball off at my LBS and Shawn was telling me that he discovered the Gussy Trail and loves riding it.  He said that he found the Mulikin Trail, too, and is loving that as a downhill adventure. 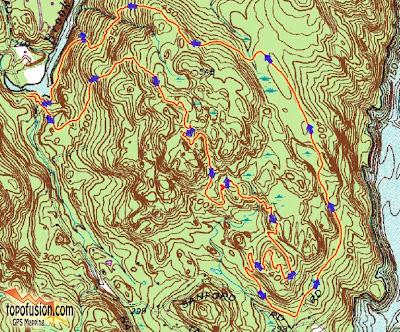 By the time I was rolling down Hanover towards Pond Brook it was starting to get dark and thunder could be heard off in the distance.  I decided to try something different than my usual loop by starting at the boat ramp and do the nasty climbs on the fire road to see what it's really like to climb with the heavier wheelset.  Truth be told, it wasn't really that bad.  I got up the three mistresses but took breaks at the top of each climb because the thick air makes it difficult to breath.  It wasn't till I was on the Gussy that I noticed how smooth the ride was.  That carbon fork is simply dreamy!
I ran into another mountain biker on the Gussy.  He was riding up the trail and stopped and chit chatted a bit. Second time I have run into him and this time he let me take his picture but he didn't want to be identified so I left his head out of the picture.  He looks like a college student and reminds me of this guy Donnie who works in Brookfield, rides a similar bike, and is an absolute machine.  I ran into him again on the flip side.  By this time it was really starting to get dark and the thunder was becoming louder.  By the time I hit the Mulikin I was wishing for an HID.  The Mulikin is starting to show signs of use, too.  Now, just need to re-route around one huge blowdown and take care of another further down.
Looking at my GPS, this route is actually shorter by about a mile.
The rain finally came just as I was exiting the forest back at the boat ramp.  The ride home was wet but I felt great!  There was a nice ancillary benefit, too, because the Kona got a little bath.  I feel sorry, though, for the guy I met on the trail because he lives on South Main and rode to the trail.  Now that must have been a wet ride home.  I had it easy because I only had to ride half a mile.
at 7:01 AM