Katie and I headed out on Mother's Day for a slightly longer ride this time, double what we have been riding. The fact that I can't down shift is going to be a major problem riding this bike but we were able to make the climb on Hanover Rd. I figured we could ride over to Dickenson Park and that might be 7 miles but it was more like 5. We did a loop on Barb's Trail. 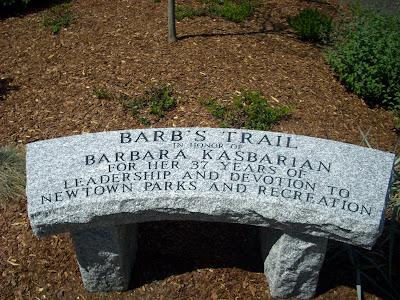 A new gravel path/trail in town that starts at Dickenson Park and goes to around some ball fields to the intersection with Hawley Lane. Katie is sitting on the bench below. 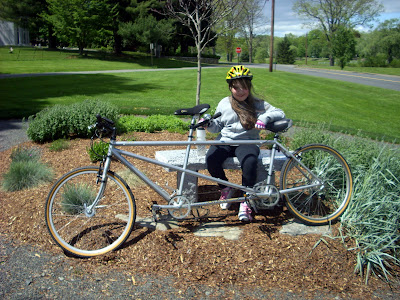 From Dickenson we pedaled up Chestnut Hill and that was an incredible climb but instead of continuing the climb we cut down a side road that eventually took us to Route 25. We were on 25 for less than a quarter of a mile before heading back onto some back roads towards Dickenson Park again. I was pumping the shifter trying to get it to down shift but it didn't help. On Grove Street we stopped for water and I ever so gently pushed on the upshift lever and then tried to downshift again and found that I shifted into the highest gear. Fortunately, the route home was mostly downhill and on any little climbs I was able to use the front granny ring to get us up.
I am going to have to fix the shifting issue if we are going to ride this bike in two weeks.
at 11:32 PM