All Gussied Up - Riding it 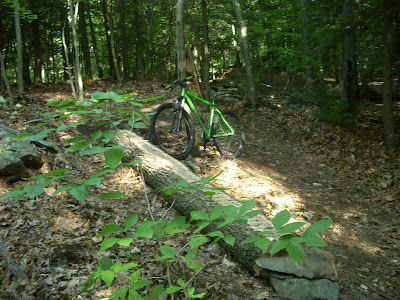 Hit the Gussy around 7 AM this morning with the intention of riding the new skinny. Dillinger is riding fine with the exception of the cracked aluminum sound coming from somewhere in the headtube. Now that I think about it I think I have had that sound for as long as I had the bike. I might have first noticed it on Veterans Day of last year while riding Greyville. 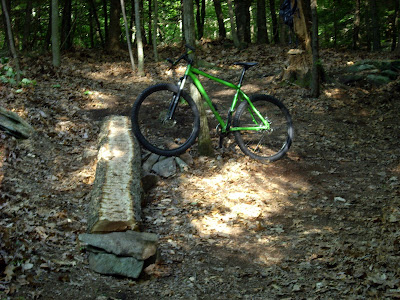 I rode up on the skinny and the first thing I noticed was having to make the sharp turn to set up to ride the log kept throwing me off. After trying it a few times I realized that I didn't have enough time to straighten out and momentum was carrying me off to the right. I fell off a few times figuring this out and got a nice scrape on my leg for my efforts. I hate to say it and I know ECHO and Bunnymen are going to say, "See DD, I told you so!", it's got to be the 29er wheels. Making the tight turn while maintaining enough forward momentum to keep you upright unfortunately didn't work here.
To make up for the situation where smaller is better, I ended up clearing a path before that gives me time to straighten out before hitting the tranny and thus my momentum is directed straight down the log. I also moved the tranny over a couple of inches so that the flat part where it meets the log is more in the middle. I think that was throwing me off as well. At some point I think I make a cut out trail that starts further up so that there is longer run up. 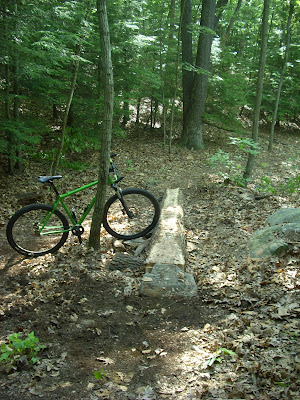 As I thought, the rocks on the end are perfect if you want to roll it, of course this could be case where bigger wheels are better so I would recommend hucking it, which I also did in the video below.
Now I am thinking about checking out the big slick rock that lies behind the Three Sisters Roller. That might make for an interesting interlude within this area. There is a lot more to play on here.
at 9:49 PM