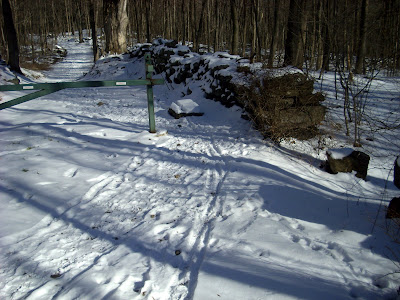 Took the dMC (demi Monster Cross) out for a test ride midday Sunday. Hoping it would warm up a little with the sun out but the winds kept the temperature in the upper 20s. There was a pair of knobbiess preceding me but they looked like the same pattern - I didn't look to closely but I think they were Frank's.
Even though hunting season is now over I still Oranged up because as I have found this is my best cold weather riding jacket, besides my Army PT jacket. This was an opportunity to try out my new Giro Hex that I have been wanting for the past year. In fact it's the 2007 styled helmet because the 2008s didn't have this color pattern. Maybe it's the old soldier in me but when ever I see olive green or woodland camouflage I get excited.
Anyway, the new helmet is really nice! The Giro Hex replaced the Giro MX (click for closeup or just look at my profile picture), which I wear in cold weather because it's really hot. It was a little hard to do an actual comparison on this due to the cold and the fact that I was wearing an ear band so you will have to wait for that post. 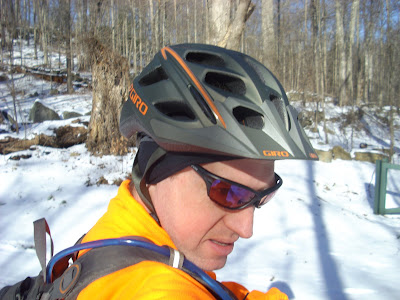 Basically, I did my bread and butter ride which is a 6 mile loop that consists of a little hard ball road, dirt road, fire road, and single track. The 32:22 gearing was like spin class on the roads and I knew that going in. Once on the fire road, the gearing, in combination with the snow was a welcomed relief. The additional resistance that the snow and underlying ice gave made this gearing perfect. 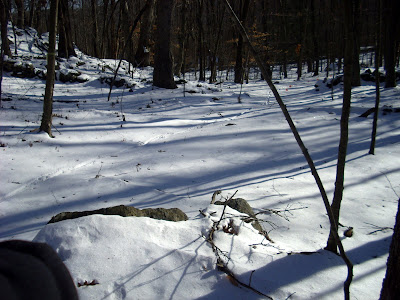 Riding with the drop bars off road was an entirely new experience. With so many hand positions, it was a challenge figuring out which was best for the situation. For example, climbing: If I am down in the drops like I would be on a road climb my but is way up in the air. This puts all my weight in the front of the bike and even though I don't think the snow really mattered (but there could have been some influence) I spun out very quickly while climbing.

I also tried it in the brake position. That is where your hands are in the front of the drops or in the arch of the bars that start the drops and you can grab the brake levers. Again, I felt as if I was too far forward. I also tried holding onto the hoods and holding at the flat or highest part on the bars near the stem. With the hoods on an angle I felt kind of awkward but this position I thought gave me the best weight distribution.

At the tops of the bars, I felt I had no climbing leverage and I also felt vulnerable that I couldn't put a finger on a brake lever. Got me thinking that I might add a pair of cross levers here. I think I have to do a few more rides to figure out what works best and obviously need to wait for the snow to melt. 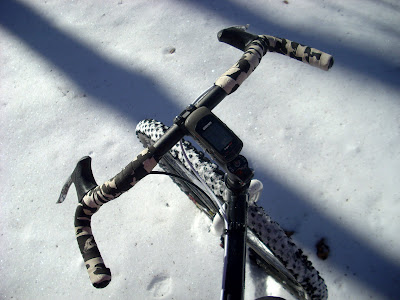 As you can see in this gratuitous bike porn shot that my seat is angled too far downwards. My friend Mark, who runs a blog about 29ers, 69ers, and various other mtb freakjuice topics but stopped posting but needs to start again if he hopes to sell any bikes (hint, hint), pointed it out to me yesterday. So that is one change I am going to make and while I am at it I am going to push the seat as far forwards as it will go. I think I need to be more centered on the frame so that if I am down in the drops I can push my butt back to keep my center of gravit centered on the frame. 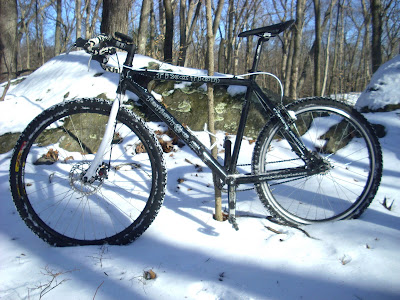 The other thing I noticed is that I still feel hunched foward in the cockpit. I bet if I were rocking an actual 29er fork my AC height would be better and I wouldn't need to try to find a way to raise the bars. In the interim I am going to cannibalize the profile comfort stem that I put on my daughter's bike - she doesn't need it anymore because I am moving her up to 24 inch wheels anyway - which has 3 inch rise at a 135 degree angle. 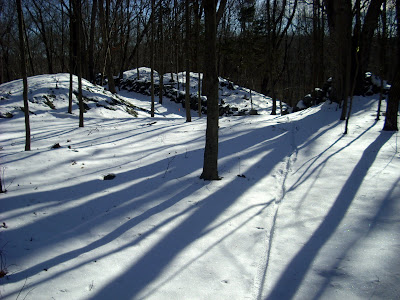 The only other adjustment at this point is the rear brakes. They were not tight enough out of the gate. Other than the climbing issues and a new set bars requiring a new style of riding, it was a fun ride. Of course the 69er concept really held it's own in the technical sections of the Gussy Trail. I didn't do the big Up-and-Over before the climb to the Three Sisters Roller but I did do the one that Frank built. Actually, you have no choice on the Up-and-Over That Frank Built unless you want to dismount and walk over it. As I mentioned before, the gearing was perfect for the conditions but I am going to race this bike then I am going to probably need a bigger ratio, like 32:19 or 32:18.

I noticed post ride I didn't feel like I was beat to a pulp after riding rigid. I guess that makes me a real man now! I will make the modifications that I can do right now and give it another try in the coming weeks. I still need to take the 'Horse back out and see if the gearing issues are resolved. I guess that is one of the issues of having a big stable all the fillies want a turn. 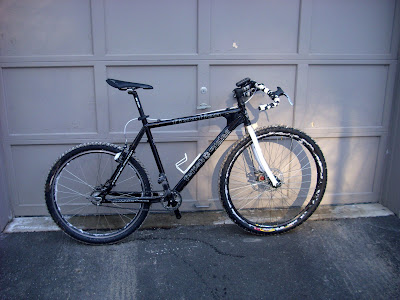