The Friday Fix: A Fixed Monkey

If you were looking for a gelded ape, you have come to wrong blog. Found this Monkey on a blog called Bedrock & Paradox, in a post titled Mountain Fixie Ride. The first thing that caught my attention besides the obvious fact that it's a mountain fixie and a 29er, was the drop bars. In particular, the placement of the levers. I think one of the problems I have with the demi Monster Cross is that the levers are too far down into the drops but if they were higher up I might be more comfortable and get more leverage for climbing. 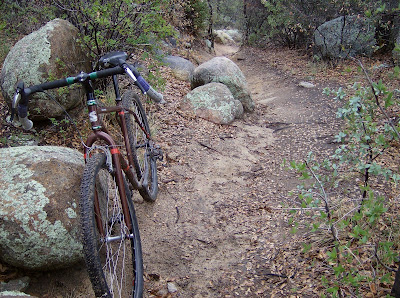 The other thing I find interesting on the bars is how the rider used bar tape up to levers, and then did a split option with Oury grips. I believe the BikeSnobNYC talked about a similar development in the Hip Fixter Community in which he found a bike on the Fixed Gear Gallery where Oury grips were regulated to supporting role, or spacer.

Although, in this case it appears the spacer is really being used to fill the gap between the lever and the rest of the Oury at the end of the bars. I might have to try this. Of course, and I don't mean to be synnical, but the mismatched color between the skidmark brown of the frame, the green King headset and the blue and gray grips make me want to vomit. Since this is an older picture maybe that has changed. 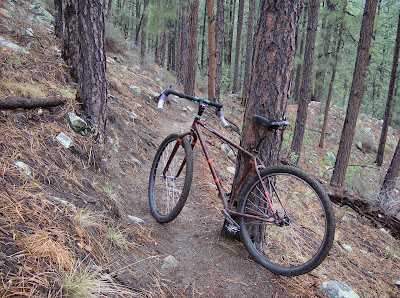 Update on my 1975 Raleigh Super Course MKII, finally got the fixed gear wheel along with another one that I ordered from the Bicycle Center in Brookfield for a mere $50! The new one came with an Alexrim but didn't notice the hub and a 14t cog (that will be fun for climbing hills in New England). The used one that I am going to use on the Raleigh is a Sunrim with a Quandro hub but it didn't come with rimtape and the valve stem is sized for an newer/thinner(?) schraeder or presta. The old schraeder tube I tried wouldn't fit so I need to hit the LBS on the way home. Hope to have it done this weekend.
at 9:29 AM

I'm still amazed that folks are riding fixed off road. Seems crazy/impossible/dangerous. Perhaps I'll have to try it sometime. Perhaps not. Though, from the looks of the pics, that dude/dudette is riding some very nice trails.

Unless you are an animal or glutton for punishment I think if you are going to ride fixed gear off road you need to do so in moderation. A hucking and bucking singletrack trail isn't going to be fun but a nice buff trail - that would be great. As for me, I haven't tried single track yet, mainly confined to fire roads and rail trails.

That makes sense. Most of the trails around here that I enjoy would require the animal/GFP characteristic and I am neither--well, not so much that I'd tried it on a fixie; I'll stick to my ss with front suspension.

GK: Where are you located and what do you ride?

I'm a bit west of you in Utah--we used to be a pretty great state, but now we are just life elevated--lots of cash spent for silly slogans.

Anywho, I ride a geared Felt on the road; off road, a geared full suspension Specialized and a single speed On One that I built up. It all depends on the weather, fitness and how much time I have!

I'd love to get out west and ride. Went to school in AZ and only did roads. Of course MTB was still in it's infancy.

Got a picture of that On One online anywhere?