Click here for more Monster Cross bikes at Cycle Snack.
After last Wednesday's walk of shame I finally got around to putting the 'Horse back together. The second tube suffered a snake bite, indeed, and I spent Saturday morning rummaging around the garage looking for a new tube. Found one and repaired the two from the ill fated ride. Cleaned the bike up, put it all together and took it down the drive way for a little spin in my jammies (the only way to do bike maintenance on Saturday morning) to see if the gearing was still a problem but I couldn't tell. Guess I will have to get it out on the trail and see how it works. 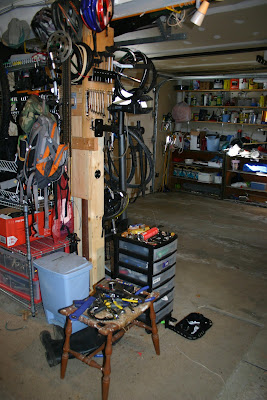 Later in the day I started working on the Fetish Fixation to transform it back into a mountain bike. I wanted to turn it back into a 69er (26 inch wheel in the rear and 29 inch wheel in the front, thus 2-6 and 2-9, or 69er) and see what it's like riding a mountain bike with drop bars. It seems that the connotation of a Cyclocross bike is any bike with no suspension (compared to bike with, e.g. my Qball) and drop bars that is ridden off road. I have been wanting to build a monster cross, which is 29er bike with a rigid fork and drop bars, that a 69er would be a demi Monster Cross.

I was using the Fixation as a fixed gear commuter and it was great in the summer and fall when we had very little percipitation but moving into the winter and eventually spring if I am going to commute, I need something with finders. I put fenders on the 'Goose already and I intend to use them on the Bridgestone when I finally build that up to a fixed gear commuter. Converting the Fixation back to off road use meant primarily changing the drive train with lower gears for off road use.

One thing that had been nagging me was the rear brake. A bike that has a front disc brake and rear linear pull/cantilever brake is called a mullet. To maintain the black and white motif on the bike, I put on these white Tektro center pull brakes that gave me that black and white accent that I was looking for, along with a white brake cable and white fork.

However, for the last year I really haven't been able to adjust them to where I would be comfortable having to rely on them in an emergency situation. I figured as I was riding mostly fixed gear on the this bike they weren't all that necessary and not to mention you really need just one brake anyway and that is front brake. When braking, you just have to remember to keep your arms stiff and your weight to the rear of the bike unless you want to pull a superman and go flying over the bars.

It turns out that the right brake arm spring was broken. Guess that is why I could never get them to work for the past year. I put on the Avid Single Digits and they work really nice, although they are a pain to adjust but I guess that is why Santa brought me a fourth hand tool to make these adjustments easier. 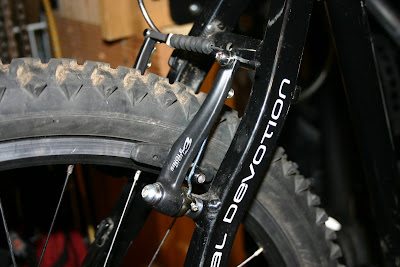 I really wanted to ride with a 20t but that cog is on the Q Ball so I opted, initially, for an 18t. It was weird because with that size cog and the amount of chain I had I couldn't get the Surly Tugnut to sit properly. I had to ensure that I had enough chain to use my 20t TomiCog. So I went with a different chain tensioner, one that I was not entirely comfortable with. 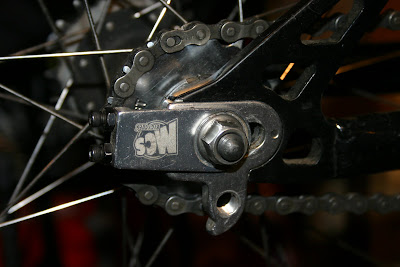 In case you are wondering what a TomiCog is, it's a gear that uses the Disc Brake mount to mount fixed gear cog (seen below). 20t, or 20 teeth, is good cog for single speeding in New England and in fact that is what I am running on the Q Ball right now. 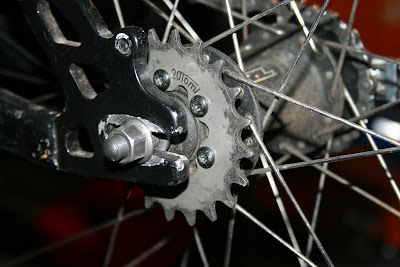 As I mentioned earlier, I wasn't satisfied with that chain tensioner so the following morning I added another link to the chain and went with a 22t cog for the freewheel. Afterall, since I was going to be riding in snow later that day the added resistance would make it pushing an 18t extremely difficult. In the picture below you can just make out the tip of the Surly Tugnut. What's so special about a Tugnut, it has a built in bottle opener and that can be extremely handy after a hard ride. 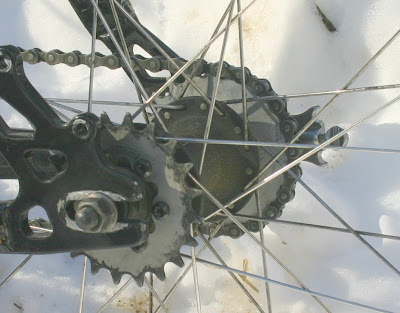 I don't recall where I read this but when you are setting up a cross country mountain bike you want to ensure that rear tire width is thinner than your front tire. I believe it has something to do with the contact patch of the rear tire being minimized so that your power is maximized and at the same time your front tire is wider and the contact patch is larger in order to facilitate better control and handling of the bike.

I decided to try out the tires that I got with the Bridgestone which are Specialized Hardrock 26 x 1.95s and with the exception of one knobby being broken off these tires are in fantastic shape. In fact they are much more knobbier than my Kenda Kerates, I figured it would be a great combination with a 29x2.1 Motoraptor upfront. Again, a narrower, ultra grippy rear tire combined with a fatter tire upfront. 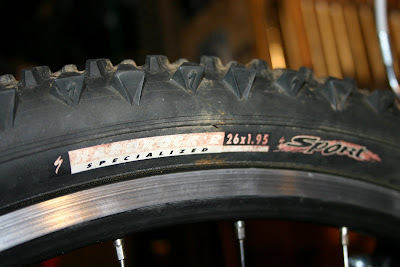 Voila! The Demi Monster Cross. For now, I am halfway towards building a monster cross. The bike weighs 25 lbs and feels pretty good. Check back on Tuesday for the ride report. 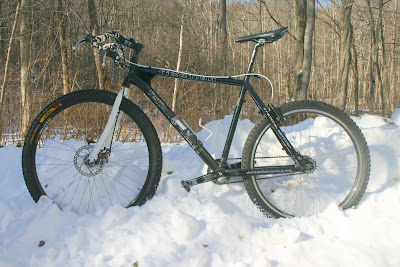 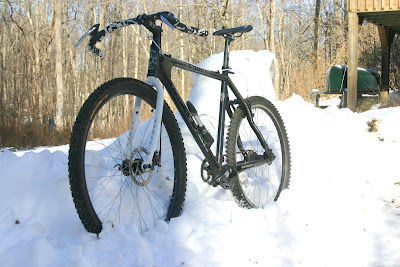 Click here for more Monster Cross bikes at Cycle Snack.
at 12:41 AM

The Fetish looks fun. OT: man you all have a lot of Snow.

Level your saddle and see if that feels better to you on your rides. That's tipped forward an awful lot.

Hey Mark - I will do that. Bike isn't really dialed in just yet.

Cal - we don't have alot of snow. What you see is what the snow plow pushed off the driveway. We got around 5 inches on New Years Eve. Week before Xmas, we got 20 inches in two storms. That was fun!

Who makes those handlebars? Looks like the no longer available(?) WTB dirt drop? I'm looking for something like that. I'd rather have a more outward flare than a standard "mustache" handlebar but not necessarily the shallow drop of a flipped "north road" handlebar.

Those are Gary Bars from Origin 8. Midge bars from On-One work, Salsa Woodchippers, or even a new comer to party is the Fme Bar from Misfit.