Another spin of the cog

Wasn't able to ride today so I thought I would reflect on 2008 and set some sights on some 2009 goals.
2008 was a tumultuous year for me. I really wanted to start racing on the Q Ball but a first quarter layoff at work put the brakes on those plans. It was a big let down and actually quite depressing but I bounced back quickly, found a new position, and picked up where I left off, sort of. Rather than racing, I got into fixed gear bikes and single speed conversions.

I acquired quite a few classic & vintage bikes this year through various means which basically led to my single speed conversion hobby. The aquisitions included:
2008 also saw some changes to the blog. I went legitimate with an official URL and a new name. I built a legitimate trail in a nearby state forest, which took a lot of my time. I got out a lot to ride but it was mostly in conjunction with the new trail so my overall trail mileage count for year was down compared to last year however I had double the commuting miles and half of those were riding fixed gear!

What's in store for 2009? I am going to race! Not trying to prove anything and I won't be quitting my day day job but I need a new challenge and I think that is going to be racing. Probably just hit those mountain bike races that are in CT, might try one or two NY that are nearby but just want to keep it local.

As for bikes, I hope to commute by bike more, especially now that I have the 'Goose set up with fenders. 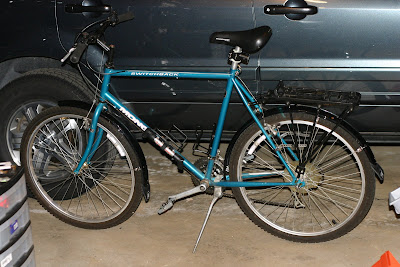 Just finished putting on some Planet Bike ATB fenders on the 'Goose which really make this bike look nice. I have another set that I am going to put on the Bridgestone once I get the gearing figured out. 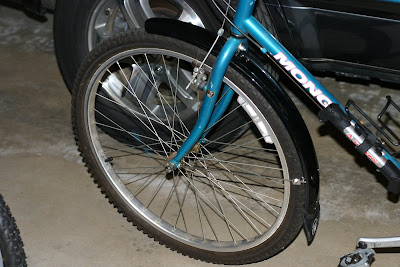 As far new acquisitions for 2009 I am first going to rebuild the Fetish Fixation into an All Mountain Hardtail, 1x9, and sell it. I am then going to buy a Kona Unit 2-9 and use that to replace the 'Goose commuter as a Monster Cross/Commuter and maybe try to pick up an Orange Surly 1x1 or fulfill my dream of finally owning a Pugsley!

Also planning on devoting more time to more collective trail efforts now that the Gussy Trail is almost complete. I would like to try to get a trail into Lower Paugussett State Forest at some point.

Lastly, besides trying to ride more with my kids, I hope to get more involved with some local charitable organizations to get more bikes into kids hands. I made a good start by getting involved with the Wheels for Kids program in Danbury and hope to participate more with that. I might also see about trying to set up a similar program in my town if that will work, or trying somewhere else.

Email ThisBlogThis!Share to TwitterShare to FacebookShare to Pinterest
Labels: Mongoose

See you there, DD: