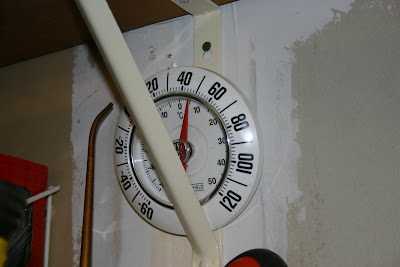 The cold snap gripping New England has had some profound affects like me not being able to ride that has left me moody and grumpy at times. Granted it's not quite nearly as cold as what Craig Barlow in Ottawa is experiencing but I think this could be the coldest temps we have had in Southern New England in the 30 years I have lived here.

To make up for the lack of riding I tried a spin class at work this week that was somewhat of an illusion of riding a fixed gear, but not quite. Feeling that I was missing something still I decided to heat up the man cave after dinner and try to find a solution for the Bridgestone. 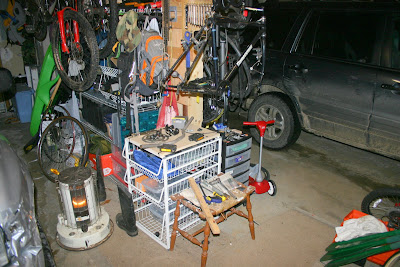 When I fired up the Kero-sun, it was 39 degrees in the garage - I think I might get some insulated garage doors and replace the side door with something better insulated. The thermometer I have on the floor was reading 35 degrees. So, I put on a few layers of fleece and my Sears Craftsman knit hat and got to work. Still, it was so cold in the garage I could see my breath. 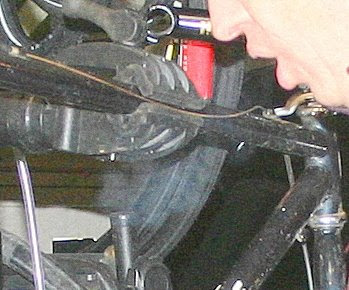 Earlier this week, I took the Bridgestone to the LBS to see if I could get the bottom bracket removed, because I couldn't budge it and neither could they. The LBS suggested heating it with a torch. I wasn't too keen on that idea and asked if they had any cranksets with an off set. 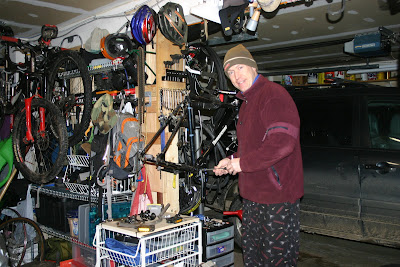 The only thing they had was a SR Suntour 175mm drive side crank with a 32t chainring and a bash guard. For $9 clams, I said let's give it a shot because I figured I probably have a non-drive side 175mm crank arm laying around the parts bin - but I don't. Heck the bash guard had to be worth $10 to $15 bones alone. 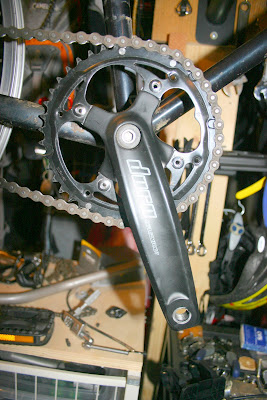 I took off the bash gaurd (I'll be putting that on the Fixiation) and replaced the 32t with a 42t chain ring and then put a 16t cog on the wheel but there was too much sag in the in chain. I like my chain lines tight!

I took a link out and then tried a 15t like the venerable Sheldon Brown recommended to me right before he passed away. That didn't work either. Then I tried 17t because that seemed to work with the Barney the Purple Cannondale:


Look at that chain line. Actually, when I think about it, it was probably too tight! Finally, I tried a different chain and got it to work going back with a 16t! There is just the slightest amount of sag but I can live with that. It's better than being too tight. The other good thing about knowing that 16t works is I'll be able to use my TomiCog now. It also means that I will probably have to use my Atomblast rear wheel to get my fixed gear game on! 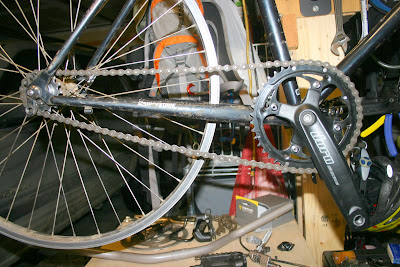 I could have the Bridgestone done this weekend!
at 7:32 AM

Cold is relative - you get used to it. People further south reading your blog must think "you're nuts!". Keep the pedals turning.
Cheers

Damn and I'm complaining when it drops below 60 here in Miami!
http://fixedgearmaniacs.blogspot.com

Temps got above freezing today and should have ridden but I couldn't leave the cozy confines of the warm house. With all this cold weather and snow we are having you'd think we are living Canada or something!