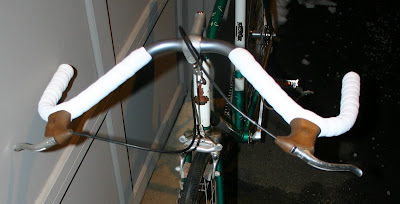 Finished up the Raleigh Super Course MKII this evening and I put on the finishing touches by taping the bars. Let me first say that Bike Nashbar Bar Tape stinks! Now it could be that I just let it sit too long in the cabinet before using it but half the sticky stuff came off on protector tape. You also don't get that little strip of extra tape to wrap the back side of the brakes. So, I won't recommend it. 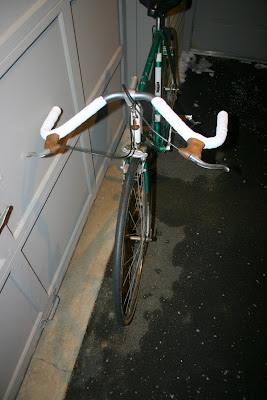 Taping these bars was pretty except for the brakes. As I mentioned before, since I didn't have that little strip I had to go over the brake, loop back on the other side and then wrap where brake hood meets the bar and then over. Probably should have made a movie on how to do this. There is a gap on the underside doing it this way and it wouldn't be there if I didn't have that little extra strip that you get with the other brands. 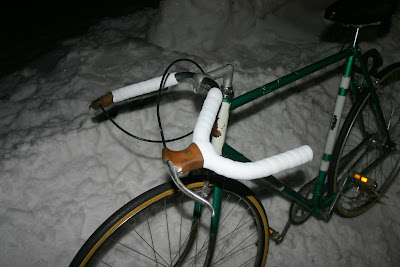 Despite the challenges, it came out really well. Now, I need a rode test but it looks like mother nature isn't going to cooperate this week. More frigid temps are expected here in New England and it looks like there is another snow storm coming on Thursday. I was looking back at some of my archived posts and there was one from last January where I went riding at Trumbull when it was 45 degrees! 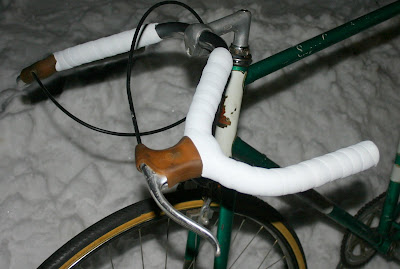 Still, I think this is going to be a fun bike! Also this evening I decided to take the bottom braket out of the Bridgestone and I couldn't get it out. I applied a copious amount of locktite and it still didn't help. In fact one side of the BB is plastic and it cracked. I have a BB tool that I had connected to a ratchet handle and I had a some pipe on the end of that and yet I still couldn't budge it. So, it looks like I am taking it into the LBS to see if they can get it out. If I can get a longer spindle in there then I will be able to use the Sugino cranks.
at 5:39 AM

I'm curious to hear about the hand positions you can get on those bars. Please let us know!

-d, I will once it warms up around here! Supposed to have some minus degree temps in New England. Yikes!

Thanks! I'm on the search for new commuter bars for my Bianchi:

My major concerns are hand positiong and mounting the brake levers. It looks like the moustache bars have pretty accessible brake lever locations.

Yes, I think you can get pretty creative of the lever locations. I am jonesin' to try it out but looks like I will have to wait till this cold snap passes.