XC Singlespeeding in the Snow!

Finally got over my fear of riding in sub 32 degree weather and just went for it this morning at Upper Paugussett SF. The clip above is me riding on the forest road in. The snow makes everything smooth as silk and really quiet. If you listen carefully or just turn up the volume the only thing you'll hear over the wind the jingle jingle of my sleigh bells. 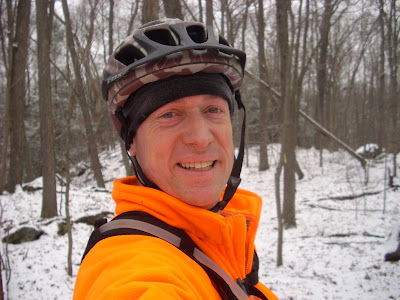 I didn't need to Orange up but while I was deciding on what jacket to wear I realized that my Columbia Blaze Orange hunting jacket was the best choice. The windstopper fleece is incredibly warm and by the time I was half way down the Forest Road I had the zip pits open and the front zipper pulled half way down. I also felt safer wearing because even though it was Sunday and you are not supposed to be hunting, you never know whether someone is still out and and about. Take a look at this thread on Crankfire.com entitled Watch out on Sundays. Not to mention what I saw on opening day as well as this story proves that you can never be too sure when it comes to hunters and safety. 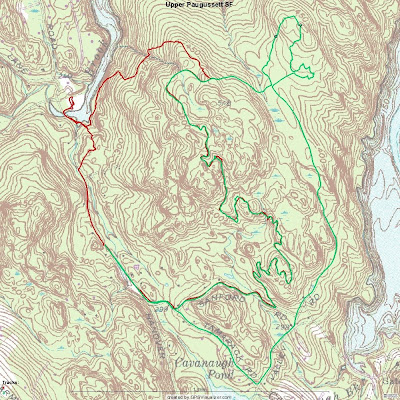 It looks like I may have found a route to Kissing Oaks. It was so peaceful I decided to follow the skidder paths. The section where I loop out to the south was more exploratory but where it comes back in runs smack into an ATV trail (which is highly illegal). My track will probably be impossible for an ATV to follow because it will require some up and overs to be built but there also some nice skinny opportunties. 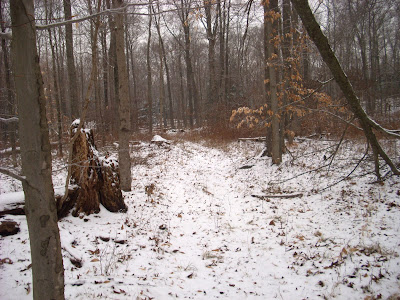 I love how the snow highlights the tracks of others. I think I might have to drag a large tree into the trail off the fire road to keep the ATVs out. Not telling how effective that will be but if I can make it as unpleasant as possible then maybe they forget about trying to ride in the forest all together. 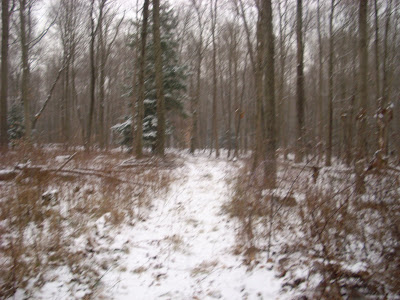 Coming down from Kissing Oak I rode the white trail. I stopped twenty yards before the first rock wall to take in the serenity and peacefulness of the trail. Turns out, where I stopped there is a skidder path that crosses the trail here and apparently the hunters think this is a good place to wait for deer evidenced by the Jersey Tree Stand (below). Great position to blast anything or anyone coming up or down the white trail, or on the skidder path. 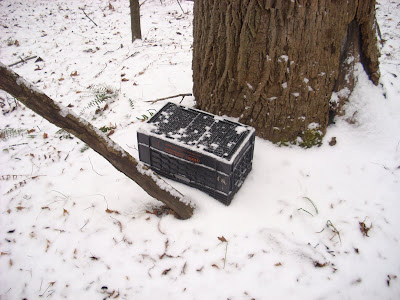 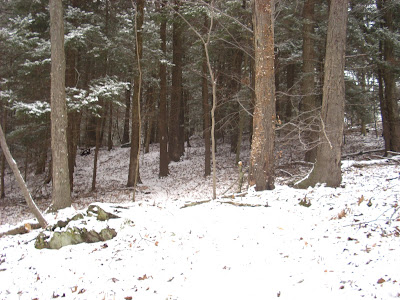 The picture below is the rest of the white trail that I was headed down. The first stone wall is seen in the middle ground. I thought it might difficult to ride through because of the snow but the snow was no hinderance at all. 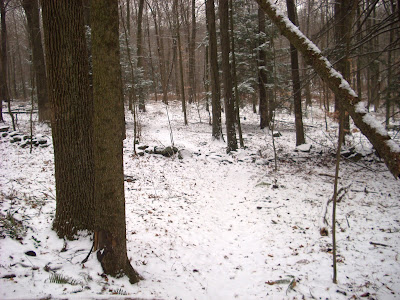 The one drawback to the white trail is that there is a blow down in the wet area which makes the trail impassable. Need to rethink part of that section. Either cut the tree or reroute. Rode back out to the forest road and climbed up the back side of the hill. Again, the snow didn't impact traction at all.

Once on the Gussy trail, everything rode really well. Cleaned all the up-and-overs, by passed the Log Ride Short, and took the easy way through the Wet Spot. It started to snow again and I was regretting the fact that I opted not ride with my glasses becasue it was getting difficult to see. I stoped and took a shot of the Qball. The bike handled the snow perfectly. 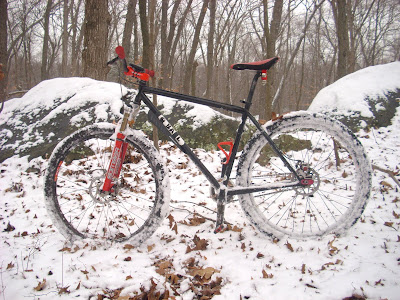 The Qball performed handsomely in the snow. Funny, it was about this same time last year we had our first snow and I was riding at Troutbrook on the Qball. Big change from then and now. This time I actually enjoyed the ride.