The Friday Fix: Five reasons why fixie-mania is sweeping America. 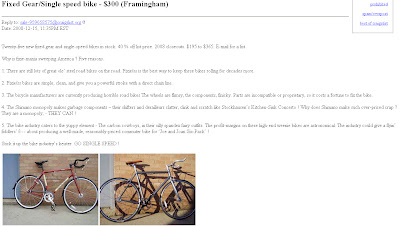 The Crazy Eddie of Framingham has done it again with yet another outrageous ad on Craigslist.
Fixed Gear/Single speed bike - $300 (Framingham)
Twenty-five new fixed gear and single-speed bikes in stock. 40 % off list price. 2008 closeouts. $195 to $365. E-mail for a list.

Why is fixie-mania sweeping America ? Five reasons.
1. There are still lots of great ole’ steel road bikes on the road. Fixie/ss is the best way to keep these bikes rolling for decades more.
2. Fixie/ss bikes are simple, clean, and give you a powerful stroke with a direct chain line.
3. The bicycle manufacturers are currently producing horrible road bikes The wheels are flimsy, the components, finicky. Parts are incompatible or proprietary, so it costs a fortune to fix the bike.
4. The Shimano monopoly makes garbage components – their shifters and derailleurs clatter, clink and scratch like Stockhausen’s Kitchen-Sink Concerto ! Why does Shimano make such over-priced crap ? They are a monopoly; - THEY CAN !
5. The bike industry caters to the yuppy element - The carbon cowboys, in their silly spandex fairy outfits. The profit-margins on these high-end weenie bikes are astronomical. The industry could give a flyin’ fiddlers’ f--- about producing a well-made, reasonably-priced commuter bike for ‘Joe and Joan Six-Pack’ !

Stick it up the bike industry’s keister. GO SINGLE SPEED !
This guy is a radical bordering on lunacy because how else is the industry going to stay in business? I'd say they are doing a pretty good job at producing bikes for both ends of the spectrum. Yes, there are people that will drop some heft coin on equipment they really don't need, there are those like myself that appreciate a quality bike and will try to get the biggest bang for my buck, and then there is 'Joe and Joan Six Pack' whose first thought will be to hit a big box store and buy buy something that looks cool and flashy, is really cheap, from a salesman (or woman) that doesn't know the difference between quality and crap. When you say stick it up the bike industry's keister you are really cutting off your nose to despite your face.
The question is, will they appreciate a quality bike or not? There is nothing wrong with those bikes, provided they are not pushed beyond their limits. They serve a purpose, too, and maybe that purpose is really just a way for 'Joe and Joan Six Pack' to sample the water without getting overally committed. Once they do, then they should head to their LBS and get some quality.
I think if you want the Fixie movement to grow it just has to be promoted as much as possible. There are some that are doing their best to promote and at the same time criticize all the posers like BikeSnobNYC and there are the fan sites like Fixed Gear Gallery and the Single Speed Garage. The movement is there, it just has to gain more momentum.
The other night I was watching Law & Order and one of the perps, characterized as an ex-NY bond trader who has gone from the high life to low life in the wake of the financial meltdown had a Fixie in his room as a prop. Cleary, the trend is gaining momentum if the casting people pay that much attention to detail.
The Fix has been lacking recently in gratuituous Fixed Gear Mountain Bike Porn so here is what I have found recently. Keep in mind, mountain fixies are pretty obscure so finding new material is always tough and now that it's winter in most parts of the country mountain fixies get mixed into fixed gear winter commuter bikes. Still, if it has wide tires and it's fixed gear it fits my definition of a mountain fixie.
From the Fixed Gear Gallery I found this Lotus Mountain Bike Fixie Conversion:

This is an early 80's mountain bike. I built it up to bang around town and for my annual trip to Mackinac Island. I wanted a fixed gear bike for the roads, but I also wanted a mountain bike with lower gears for the single track trails up there. Sheldon Brown provided the inspiration for the drivetrain setup. He has a couple of bikes set up similarly. This bike has a cog bolted where a brake rotor would normally go for its fixed gear. When I flip the wheel around, I have two cogs on the freehub that line up with the two front chainrings. The bike is technically a three-speed. Most of these photos were taken on Mackinac Island (which is in northern Michigan) where cars are not allowed. 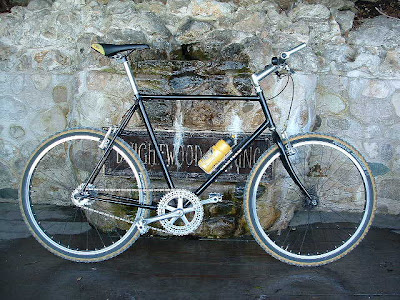 I like the set up of this bike which may lead me to do something radical with the Nishiki. I have a wheel in which I can do this, too, so it might be worth a try. Looks like TomiCog, too. 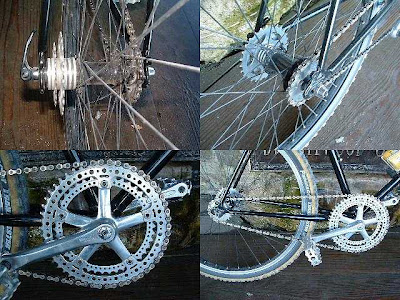 This Green Hamburger Surly 1x1 is pretty unique with a left side drive train and both front and rear disc, which look like 185mm rotors. A bit overkill for road riding but still Geil! 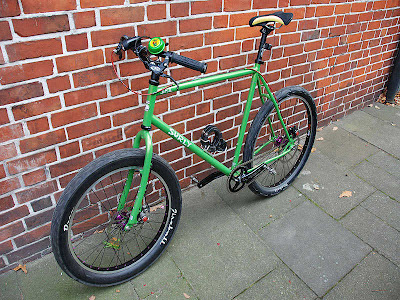