Last night I volunteered at the Cannondale Bicycle Corporation Corporate Headquarters in Bethel, CT to help service kids bikes for the Danbury Youth Services "Wheels for Kids" program. Apparently, there was a budget shortfall in the City budget and this program didn't have the $$$ it needed to carry on the upcoming Santa's Workshop that will be held on December 20th. The program needed a mere $1700 to continue, a price tag that many of us cyclists have spent on a bike, to keep the program running this year.

A call for help was put out to the surrounding community in this Danbury News Times article, which led to an outpouring of support, the monetary donations have flooded in to keep the program working for years to come. The "Wheels for Kids" program is ran by another Danbury Youth Services program called the "Earn-a-Bike" program. The program director, Tom Tomassen is pictured below in the white shirt. 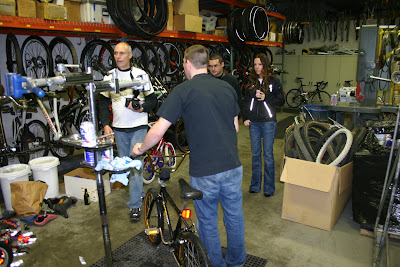 One the other side of the building there was a wash rack and all the donated bikes were being scrubbed down and cleaned. Then the bikes were wheeled over to the shop where they had tubes and tires replaced, all loose components were tightened down, new brake lines were added, and even one of the bikes which was pretty nice got the bearings in the front hub repacked! 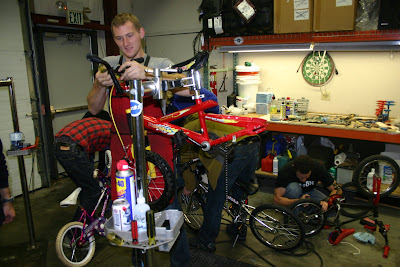 The bikes that were donated ranged from excellent condition to absolute crap. I brought along two Huffys, one of which I featured in a Eulogy post and the other that showed up the other day that I call the Purple People Eater, but the PPE and the other Huffy weren't acceptable for the cause, will return to the breakers after being stripped for parts. One thing I noticed, though, is that Tom had quite a supply of old bike parts, which I think I am going to start donating to from my efforts at the Hanover Recycled Cycle Shop, which is I am calling my garage now. 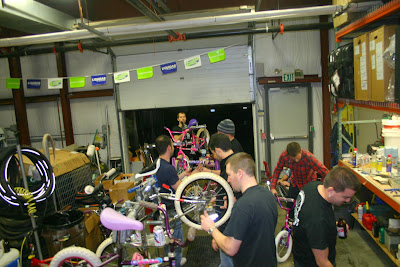 With the exception of the two or three mechanics that work for CBC the remainder of the volunteers were all employees from Cannondale Bicycle Corporation's World Wide marketing team that had gathered in Bethel this week to strategize for the coming year. In stead of dropping pretty penney at some local fancy restruant they all assembled here to work on these donated bikes, drink some brews, and later eat pizza. 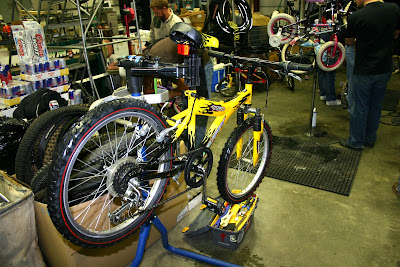 I worked on five or six bikes including this Huffy 1x7 with 20 inch wheels (above). Incredible how these bikes, while not the greatest quality, will most likely wind up in a garbage dump after the child grows out of it. All this bike needed was air in the tires and a brake cable capped. 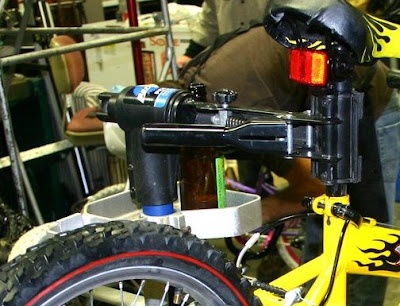 I really enjoyed working on the Park Tools collapsible stand. I think I am going to have to get one of these and definitely a shop apron. The stand has a nice tray for holding tools and beers! 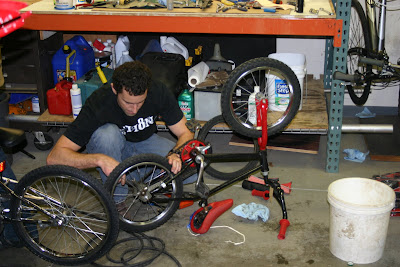 Even with all the bikes in the stands, people were taking available floor space to work on the bikes, too. In fact it was pretty crowded. 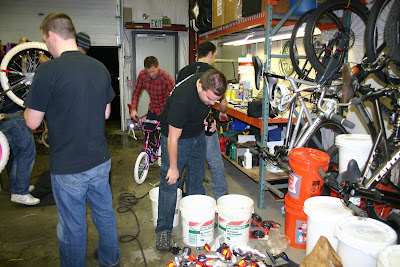 Cannondale's workshop was unbelievable. They had hundreds of frames hanging from the ceiling that all were early prototypes of one model or another and a slew of test bikes hanging from the wall, mostly mountain bikes and they all had plenty of mud on them from plenty of use. Must be nice to work for a company that has this many bikes and a backyard of open space containing 20+ miles of trails! 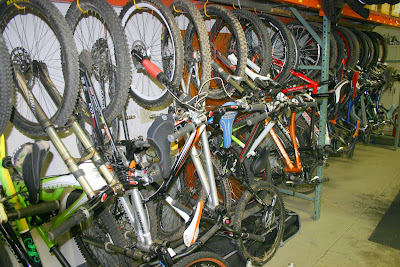 This is an awesome cause. I'd like to do something like this in NYC, but I'd feel really bad about where the kids have to ride.