After last Friday's Turkey Burner ride I felt that I may have burned too many calories and needed to replenish my caloric constitution by trying a new beer called Bad Elf. All you Connecticut Yankees may recall that another beer from Shelton Brothers, Seriously Bad Elf, was banned from sales in Connecticut because it is illegal for Kris Kringle, aka Santa Claus, to appear on a beer label. More details on the issue can be found on Realbeer.com. 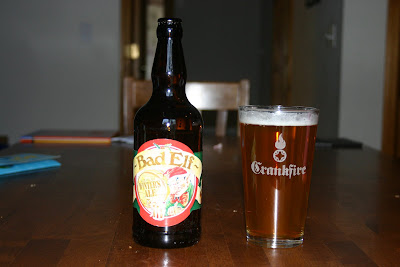 All controversy aside, Bad Elf is OK but I would have expected more from an IPA. When I think of a Winter Ale, my favorite is Sierra Nevada's Celebration Ale. Recently, I have been able to tolerate Samuel Adams Winter Lager but the mulling spices in the recipe throws the taste off and that is how I felt about Bad Elf. Something in the ingredients seems to throw off the flavor that I was expecting. It was somewhere between the Samuel Adams and Sierra Nevada. Every swig had me wishing for something more. In fact, I kind of felt short changed so I followed it up with a Bomber of Drayman's Porter from BBC.

I do like the Shelton Brothers website that describes Bad Elf but even with all the humor it doesn't make up for the mediocre taste.

A little malt, a little hops, and lots of holiday trouble-making; this Elf is so bad, it’s way good.

Olde England meets the New World in this strong, warming golden ale. A generous amount of famous English malt is masterfully balanced with an astounding 45 ounces of fresh hops – including English Cascade – per barrel. Bad Elf is brewed by Peter Scholey, master brewer for the late and much-lamented Brakspear Brewery of Henley-on-Thames, England. Peter has bought up the entire crop from the single row of Cascades grown in the U.K.

ELF WARNING: Consumption of too much Winter's Ale may be bad for your elf and may impair your ability to drive a sleigh or operate toy-making machinery.

The illustration for the Bad Elf label was painted by Massachusetts artist Gary Lippincott, whose work also adorns Shelton Brothers labels for Inveralmond Blackfriar and Isle of Skye Wee Beast . 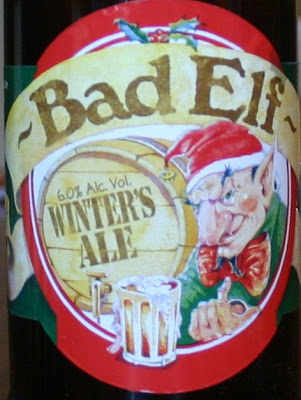 now you made me thirsty for a beer

Come round to my house anytime. Always have BBC in the fridge.