Probably wasn't a good idea to ride to work after doing a somewhat strenuous ride the day before. When I left the house Monday morning the bike felt off and my cadence sensor wasn't working but I pressed on but when I got to Echo Valley Road I realized I forgot my work id and headed back.  At the house, after getting my id, I tried adjusting the sensor but it wasn't working.  Thinking its the battery but I did raise my seat post half an inch and it felt much better. 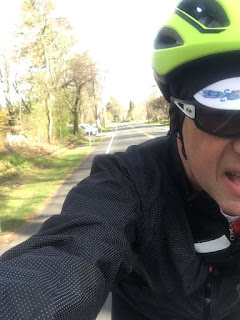 Back on the bike, I noticed rubbing sound coming from one my disc brakes but decided to ignore it. Then I realized that forgot to check my air pressure.  My final bail out point is at the intersection of Key Rock and Hattertown Road but everything else seemed smooth so I went for it. The termperature was nice and so were all the other commuters.  I think someone passed me a little close on that little hill along side the reservoir after the intersection with Rt 53, otherwise it was smooth sailing.  I did, however get to the office kind of late. 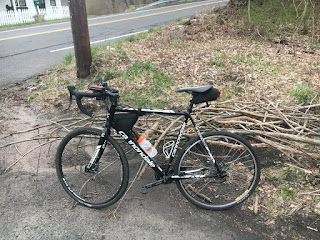 On the way home I left my shoe covers and wool socks at the office and wore my work socks for the ride home. It was slow going, though, and despite the toe covers my toes were still cold. By the time I got to Hopewell Road I checked the temperature and found that it dropped to 39 degrees so I stopped to switch my vest for a jacket and it was good thing because once again when I hit the Newtown line, it started to rain again. 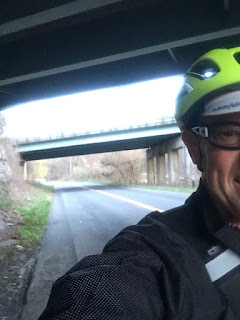 Two miles from my house the sprinkles turned to freezing rain/sleet so I took a quick break to warm up my feet under the Route 84 over pass.  I also took a picture of this lousy patch job the Newtown Highway Department did a year ago that has been bugging me since they did it.  It's like they had extra asphalt that they had to get rid of and seeing that there was an issue here, they just dumped  and didn't even attempt to cover the whole thing.  What's the point? Frankly, its only worse. 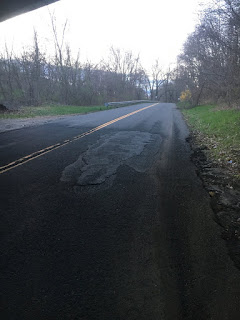 Coming home to a warm house was very comforting but I was dead tired.  I might not have broke any personal records on this ride but I was pleased to know I exceeded last months mileage total and well on my way to hitting 3000 miles by mid June.
at 5:09 AM