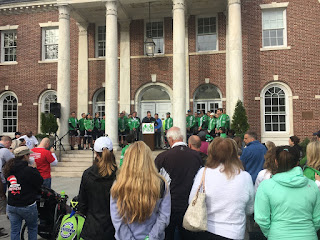 Mike and I decided to do a ride along with Team 26 starting at Edmond Town Hall.  Once again, Father Bob had a great invocation and quite a few political leaders, as well as others, who are victims of gun violence got up to speak. It was moving. It's hard to believe that with everything that has happened since the Sandy Hook shooting:


Our government still does nothing. Even after one of their own gets shot, all you get from Washington, DC is Thoughts and Prayers for the victims. Its just worthless lip service from our elected officials, who the people of this country put there, only to have them cow tow to special interests and lobbyists. They don't represent the people that put them there otherwise they would be bending over backwards to make this great country safer for the people they represent. I am embarrassed. At least, on a state level things are happening to improve our safety and preventing gun violence but we really need it to be at a national level to for it to be truly impactful. 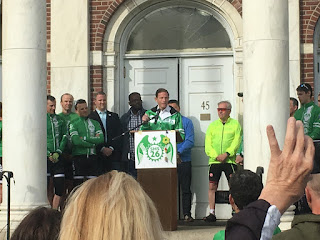 Standing to Senator Blumenthal's left is Matt Knickerbocker, the First Selectman of Bethel. He's a cyclist and pretty good one at that. Monte Frank gave his closing remarks and said that he is carrying a petition of a quarter of a million names asking for new measures in Congress to thwart gun violence. 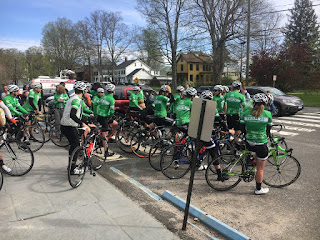 The riders assembled and then we took off. Team 26 includes two of our riding buddies this year and we wanted to support them by riding as far as we could with them. 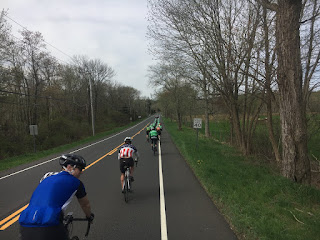 From the start they began with a grueling pace that I would say was close to 20 mph but slowed a bit by the time we hit Ferris Acres.  Mike was fairing better but after turning onto Nashville Road in Bethel we got dropped. 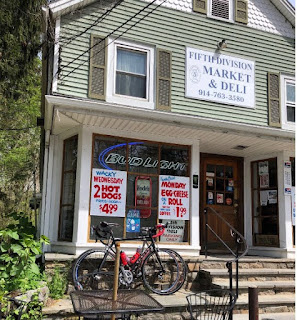 Mike and I planned to ride all day so when we got dropped we just started heading towards Yorktown Heights from Redding.  We rode over to Route 7 and down to Branchville, then up Route 102 to Ridgefield, some back roads that took us into New York and then Route 35.  In Cross River we stopped for a bite to eat and Team 26 came rolling by about 15 minutes later.  They were moving!

Knowing that we were going to do a big ride I was actively managing my Garmin's battery by trying to get the most out of it.  Since I knew the route by heart I didn't turn on the turn by turn feature until we got into unfamiliar territory.  Bluetooth was turned off, too, and at all major stops I powered it down.  When we got to the end of the rail trail and were heading off into unfamiliar territory I inadvertently saved my ride only to discover when I got home that the GPS stopped working from Cross River to Carmel.  It tracked the distance and time but not the route. 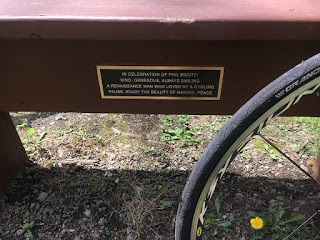 From Cross River we continued on Route 35 to Yorktown Heights. Its been awhile since I have ridden this stretch of road and it was horrible. Never taking this route again until it gets another covering of blacktop.  The unfamiliar territory I mentioned is between Southeast and the Connecticut border, which is an area that I have never ridden before. 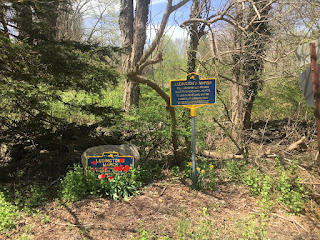 On the NY boarder with Connecticut there is a marker designating where Col. Ludington came through leading his troops to push the British Troops out of Danbury.  From here we rode through New Fairfield and then into Danbury to Brookfield, down 133 and up to Bridgewater.  Descending down into Roxbury we made our way to the Roxbury Market where it was time for another water and food stop. 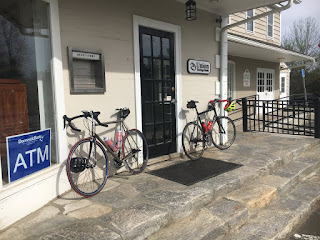 Then we rode down Route 67 to Southbury and then rode out on Transylvania Road to Woodbury to Ovens of France.  There were no Ham and Cheese Croissants so we headed over to Woodbury Brewing Company.  Hoping for a nice New England IPA we learned that they all their local brewed varieties were gone so I had to settle for Lunch and Peeper from Maine Beer Company to accompany out order of wings.

When I got home I learned that the Garmin failed to capture what we rode from Cross River to Carmel.  Mike added me to his ride on Strava so I didn't have to totally FOMO. I think I might have over managed my Garmin.  I think what must have happened is that when I the Edge back on the GPS never acquired but what's funny is that it never acquired after that.  I wonder, if somehow it turned itself off. Next time, rather than stopping the Edge at a rest stop, I am going to just turn it off. 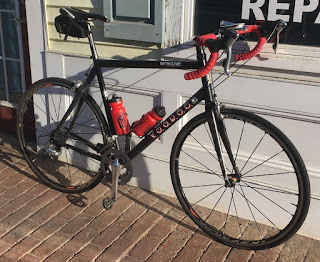 This is an important milestone for this bike because I felt great after riding 110 miles. I think I might need a new rear cassette but other than that, this bike is fantastic and I look forward to riding it on more big rides in the coming months. Not a bad deal for $500!
at 6:00 AM