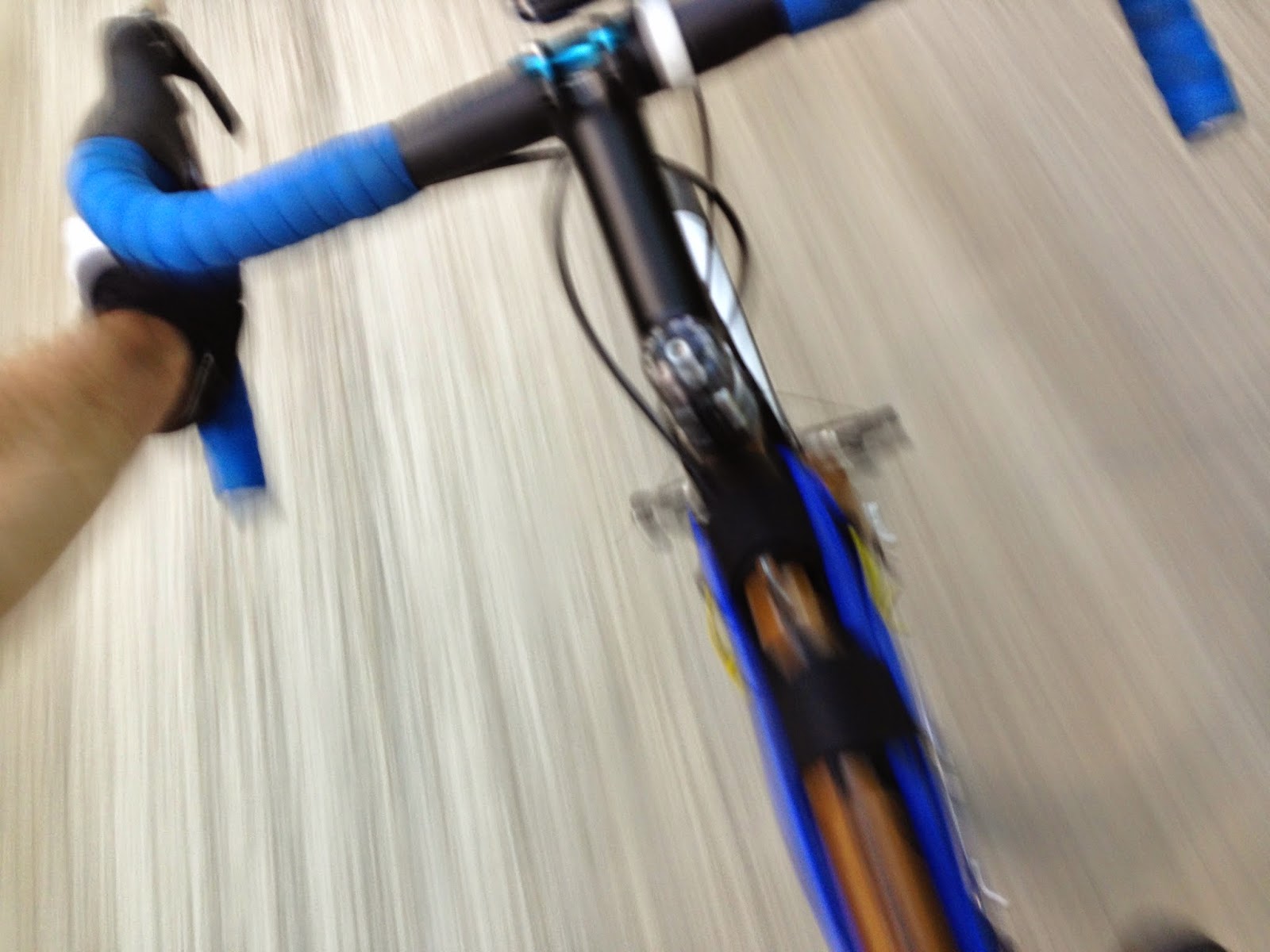 I took a day off from work, granted I needed a break after the past four weeks of working my ass off, to ride 100K, get at least 5000 feet of climbing in, and ride some gravel in preparation for D2R2.  The funny thing with planning courses is sometimes you never know if these roads go through but today it didn't matter because I was riding my Surly Cross Check! 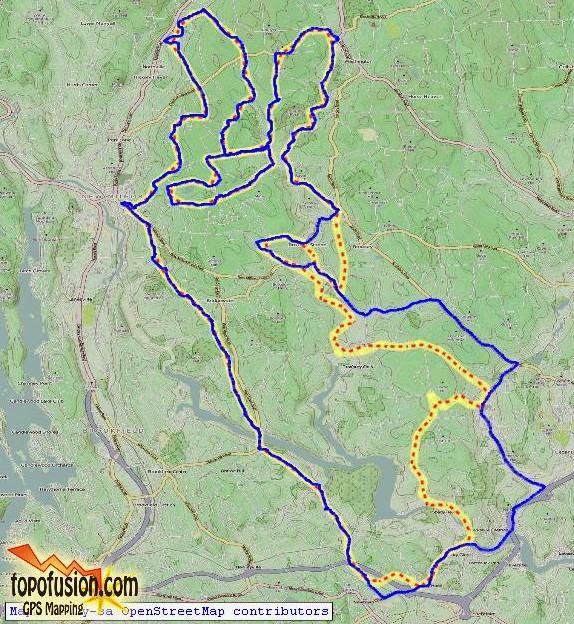 I had planned on riding the Dirty Hippy Populaire in the morning but a last minute scheduling change with my son's waterskiing camp meant that I would be riding afterwards and of course, as luck would have it my start time got pushed back because the kids were having so much fun.  The course I had intended to ride (red dash) was 70 miles but what I ended up riding (blue line) came about due to a few miscalculations.  When I got to Steep Rock Reservation the first part of the rail trail was kind of muddy so I routed around the second part before the tunnel but that got me thinking about what is it going to be like after the Blue Barns? 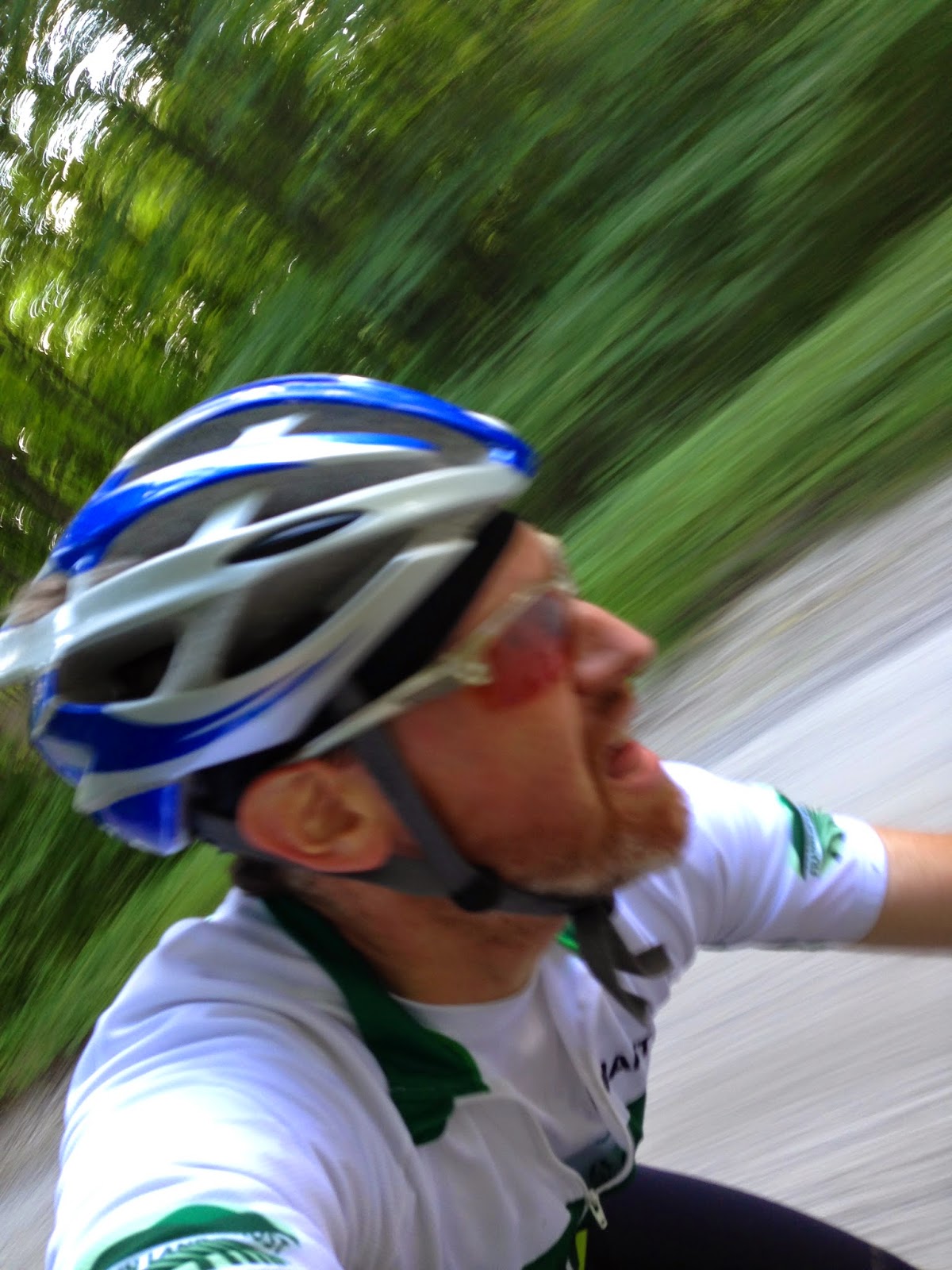 Another miscalculation is I thought I could do this course averaging 12 miles an hour but with all the climbing, 7000 feet, that was an overreach.  While I was able to finish the ride at an average of 12 mph, that was only because the last 15 miles home was mostly downhill and on pave. 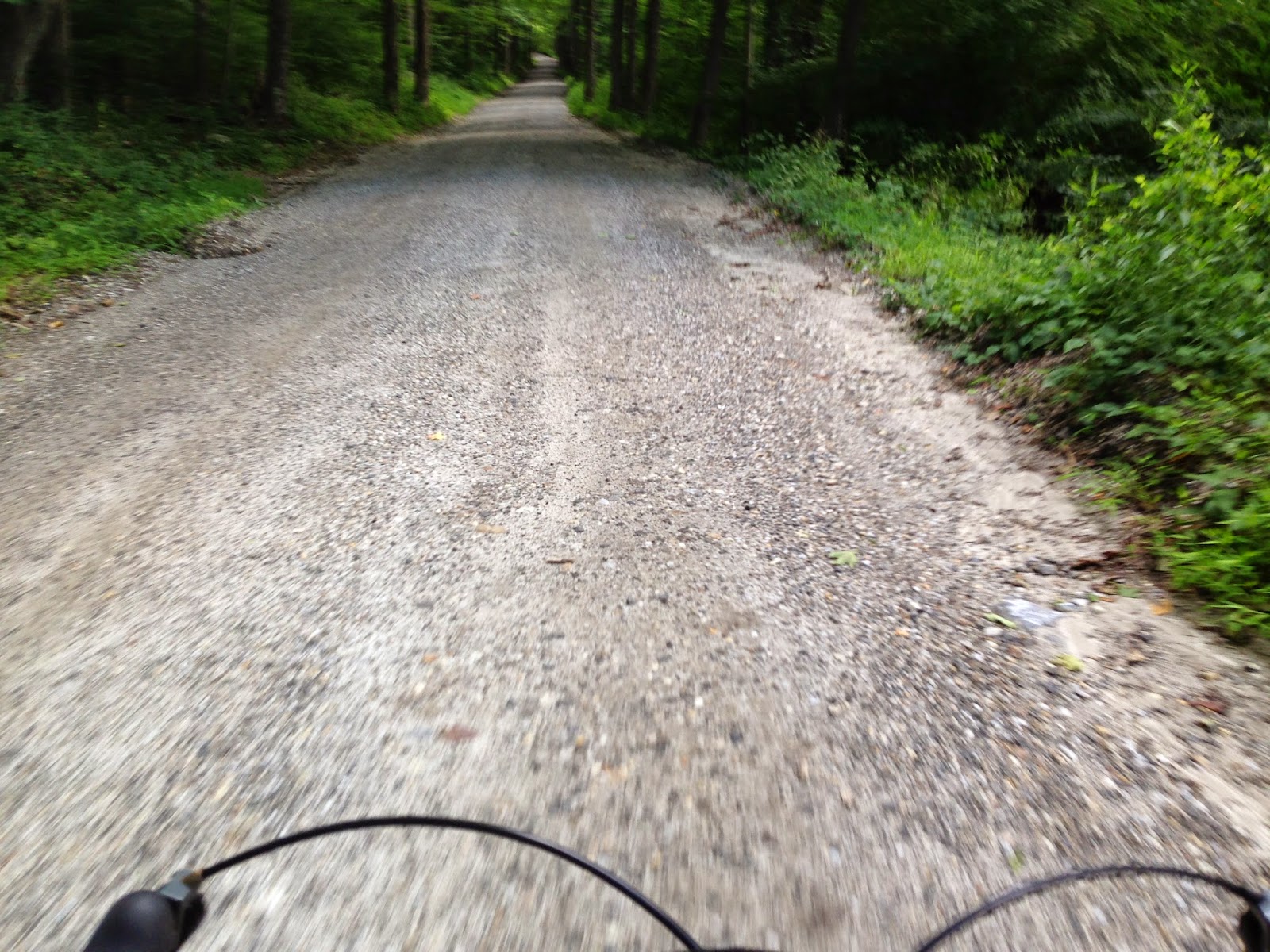 Still, I found some more dirt roads, these were mainly in New Milford that added to both the fun and challenge of this kind of ride.  I had no clue that I would be climbing over 5000 feet but some of the new stuff that I found was really hilly. 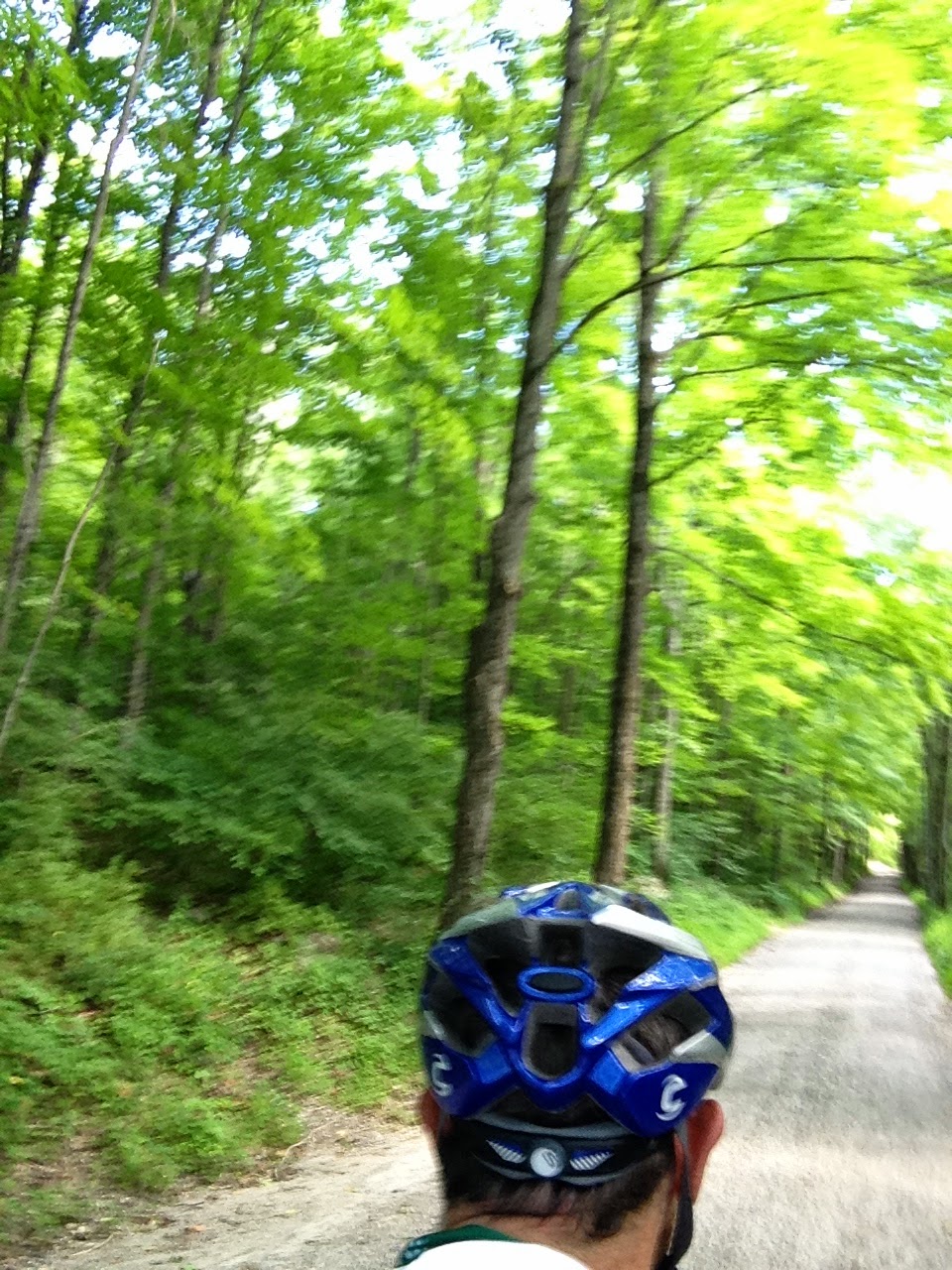 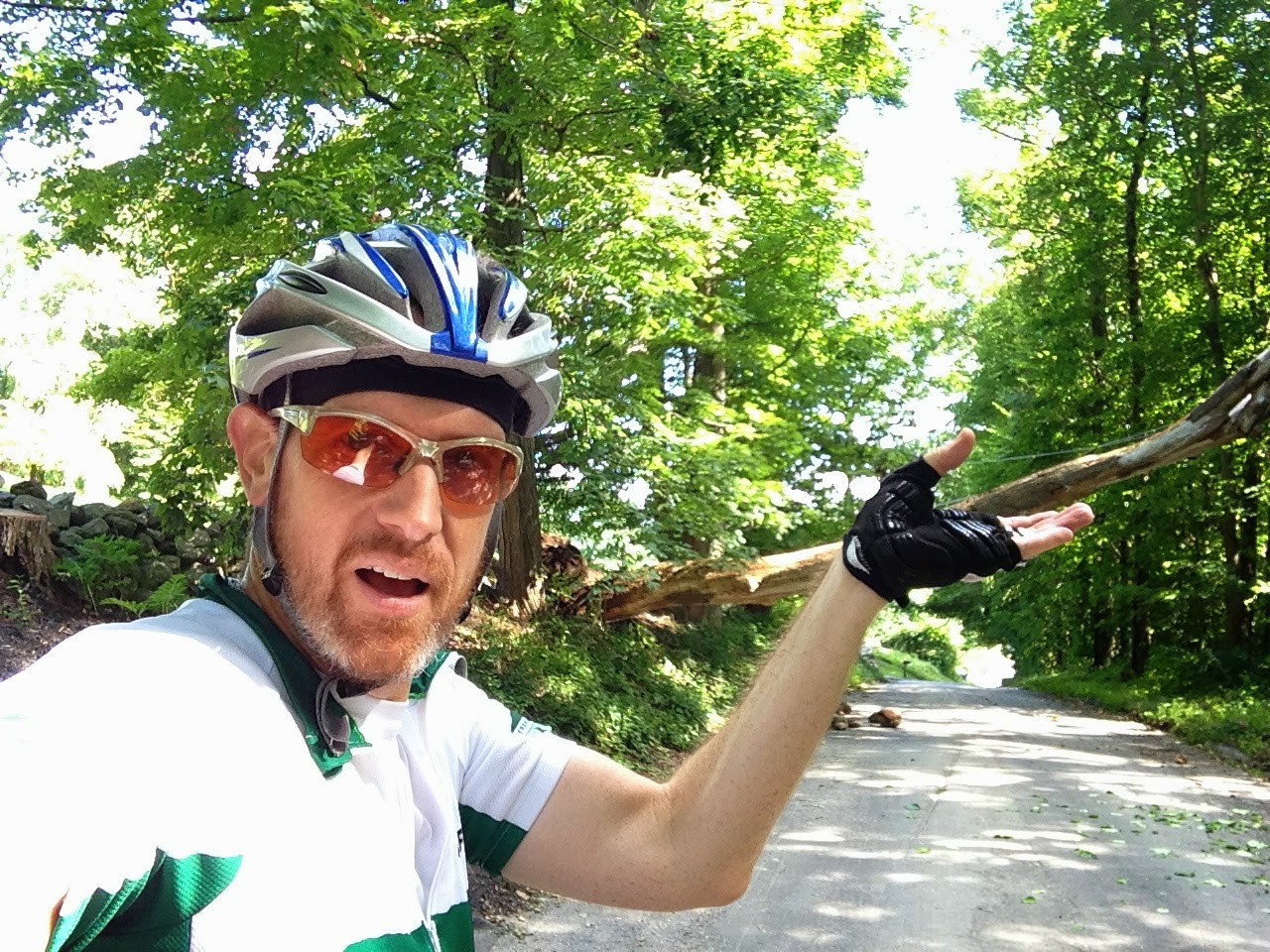 I found some more dirt between Chapin and Hartwell that I have never ridden before and was surprised to see this tree being suspended by wires in the middle of the road.  Where was CL&P when you need them? 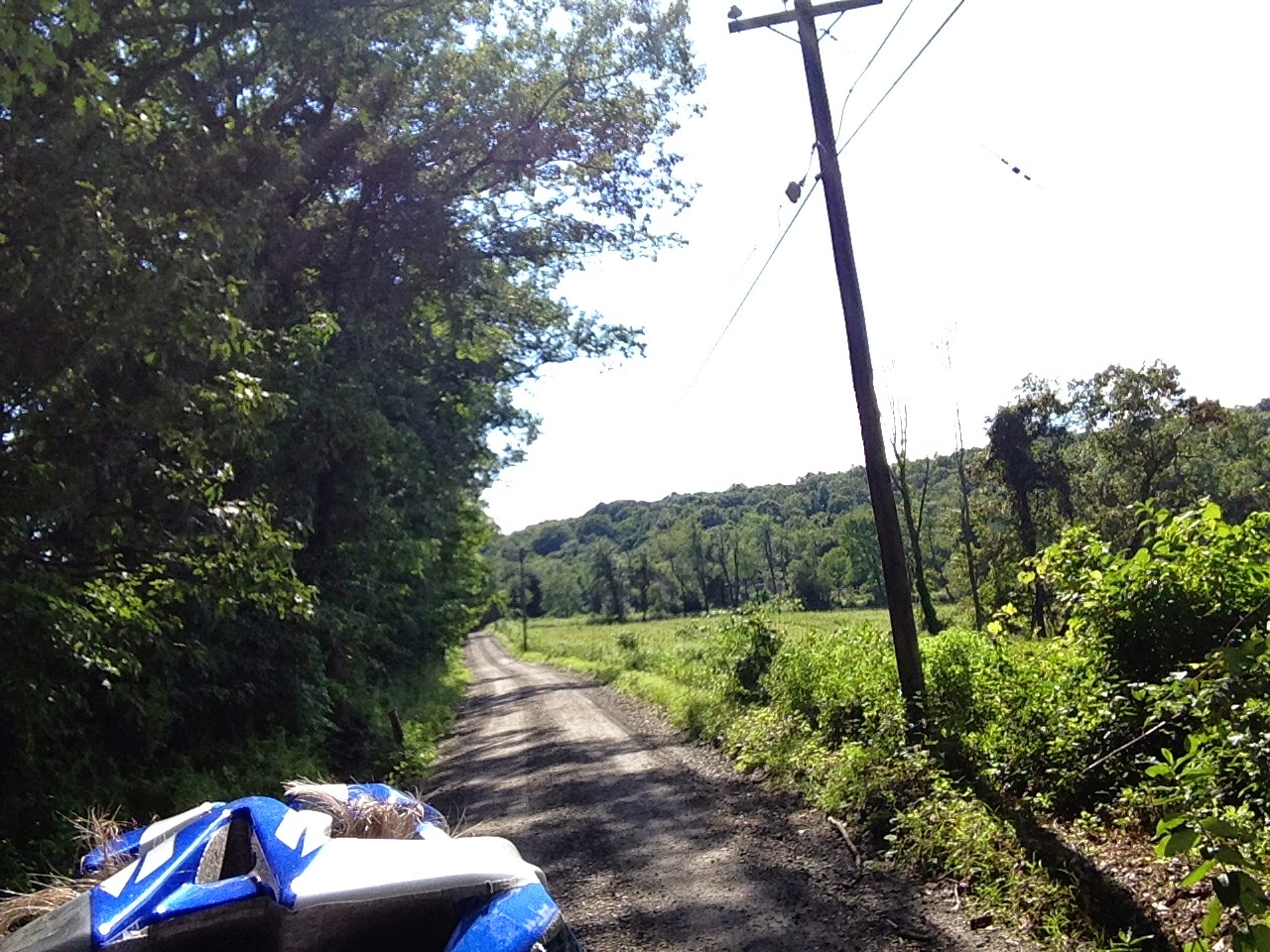 This route enabled me to do three of the four climbs on this side of the ridge including Judd's Bridge, a venerable favorite.  To make it work, though, I had to descend Hartwell, twice, but finding McMahon Road in New Milford and climbing up to descend and then climb up again made a great alternative! 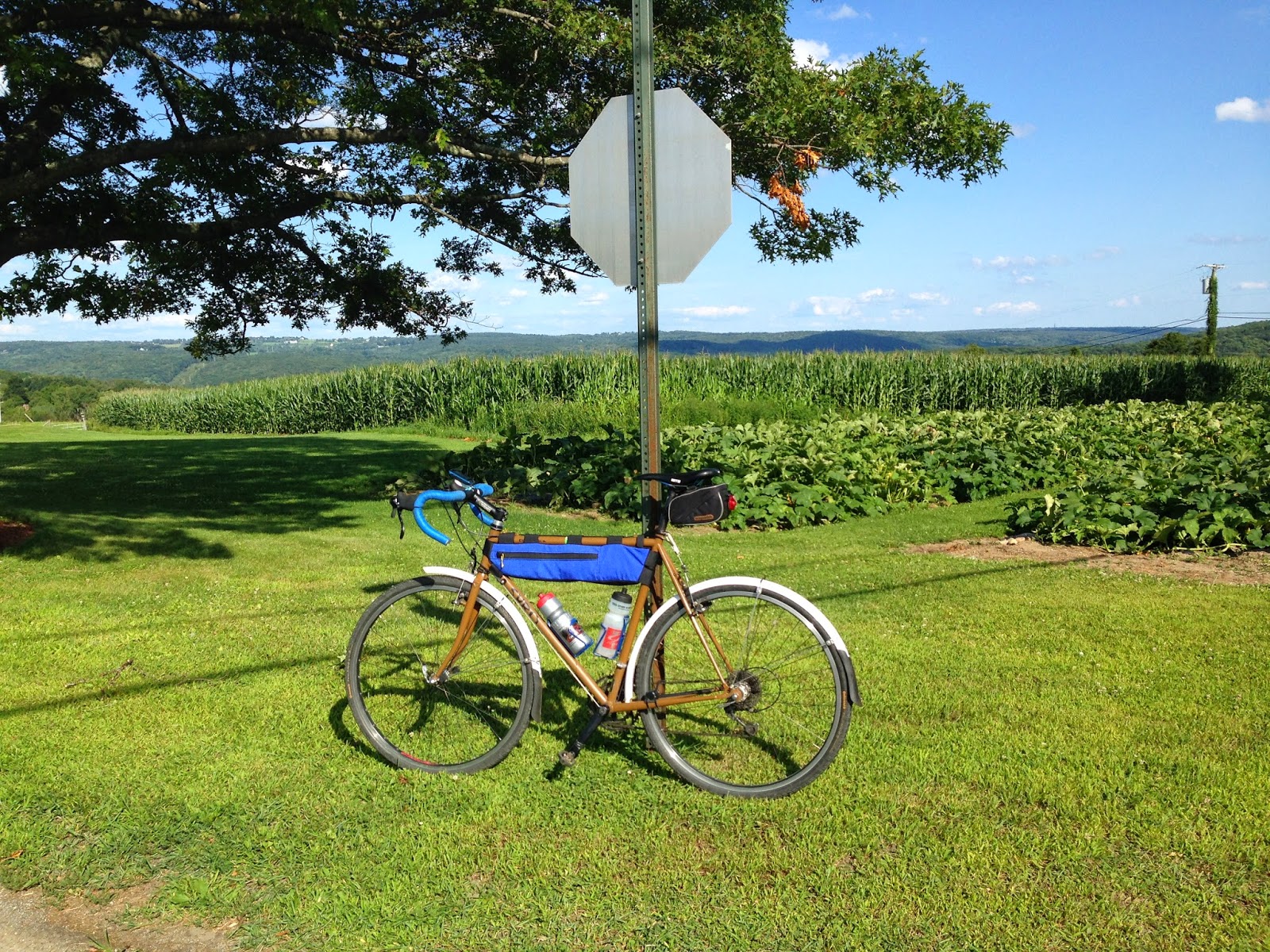 The top of Hartwell is truly god's country!  At this point during the ride, though, I realized I had made another mistake.  I should have drank a quart of Power Ade before starting the ride but was rushing around after getting home late from water skiing and I forgot so by the time I got here I was down to half a bottle of water and I was getting nervous about running out of water. 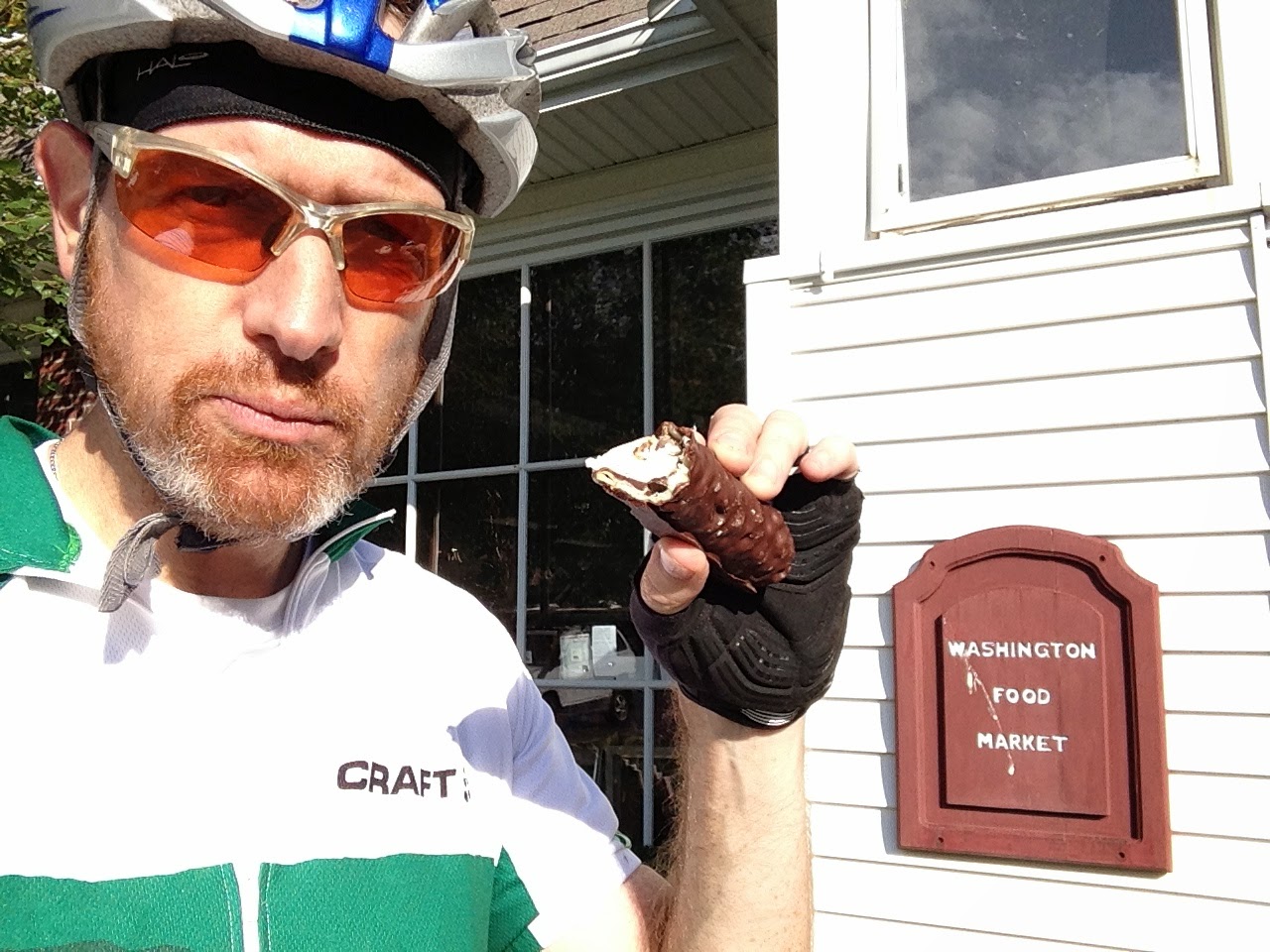 Fortunately, when I got down to Washington, the Food Market was still open and they had the best Cannolis!  I could have probably gotten water at the Package Store, too, but that Cannoli was Out Standing! 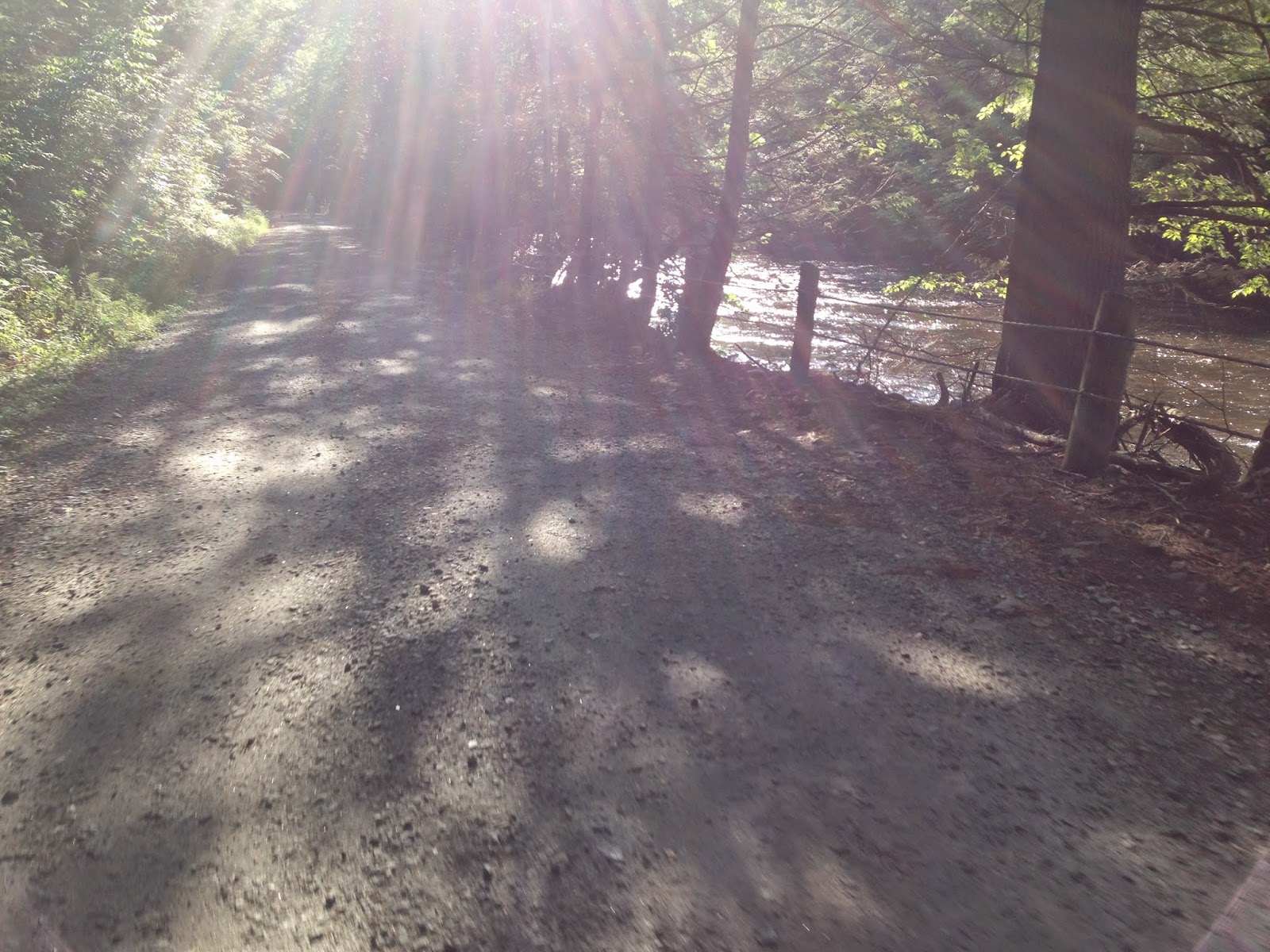 Another must ride section up here is Steep Rock Reservation.  Riding along the Shepaug River this late in the afternoon was breath taking.  I rode more of the dirt road this time rather than the rail trail because there are some usually muddy sections before the tunnel that I figured were going to be really bad after yesterday's rain. 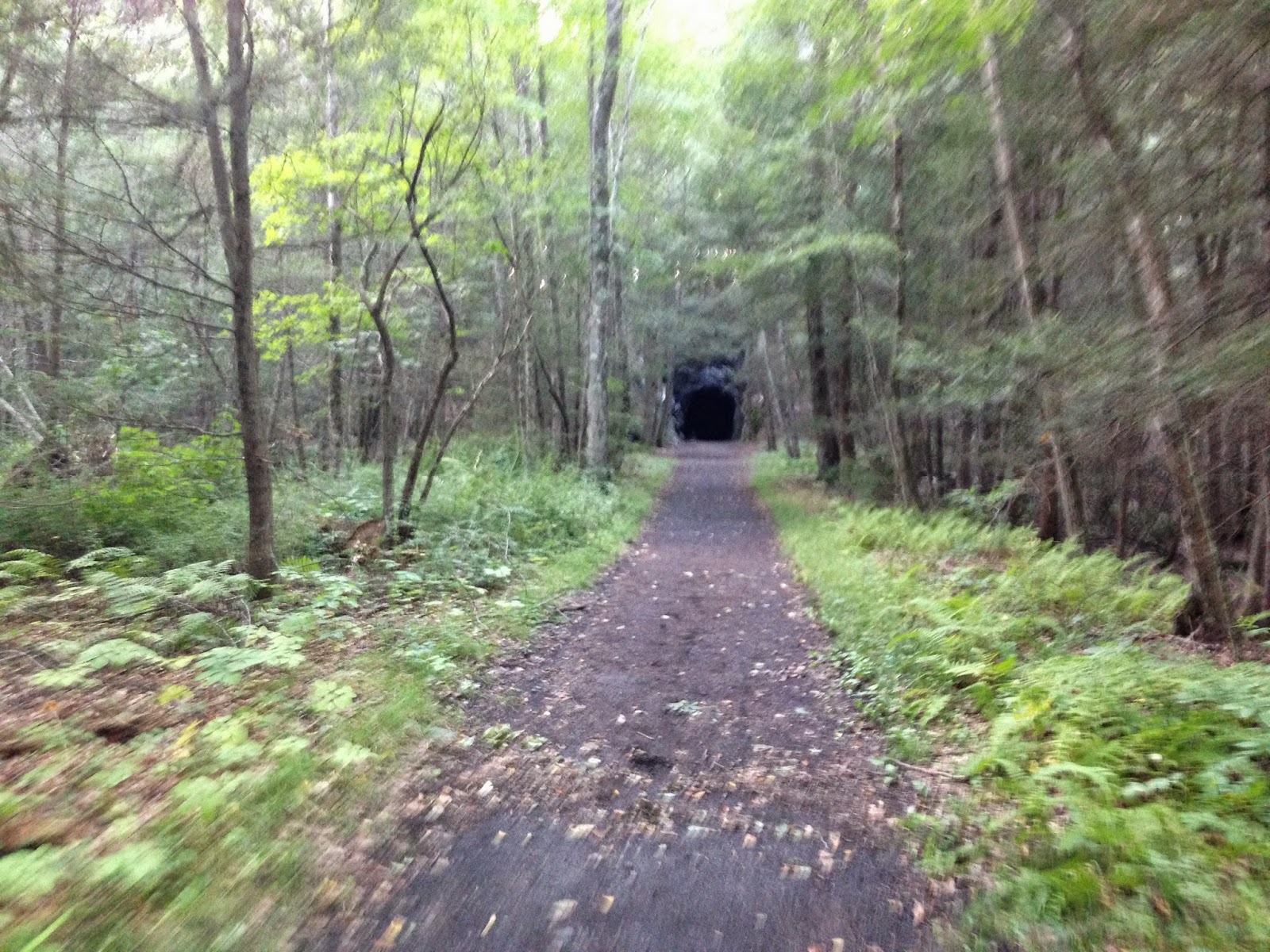 Riding up to the tunnel, for some reason, makes me giddy with excitement.  Not sure if it's because I am about to plunge into utter darkness or that I am recreating what those engineers experienced when this was an active train line 100 years ago. 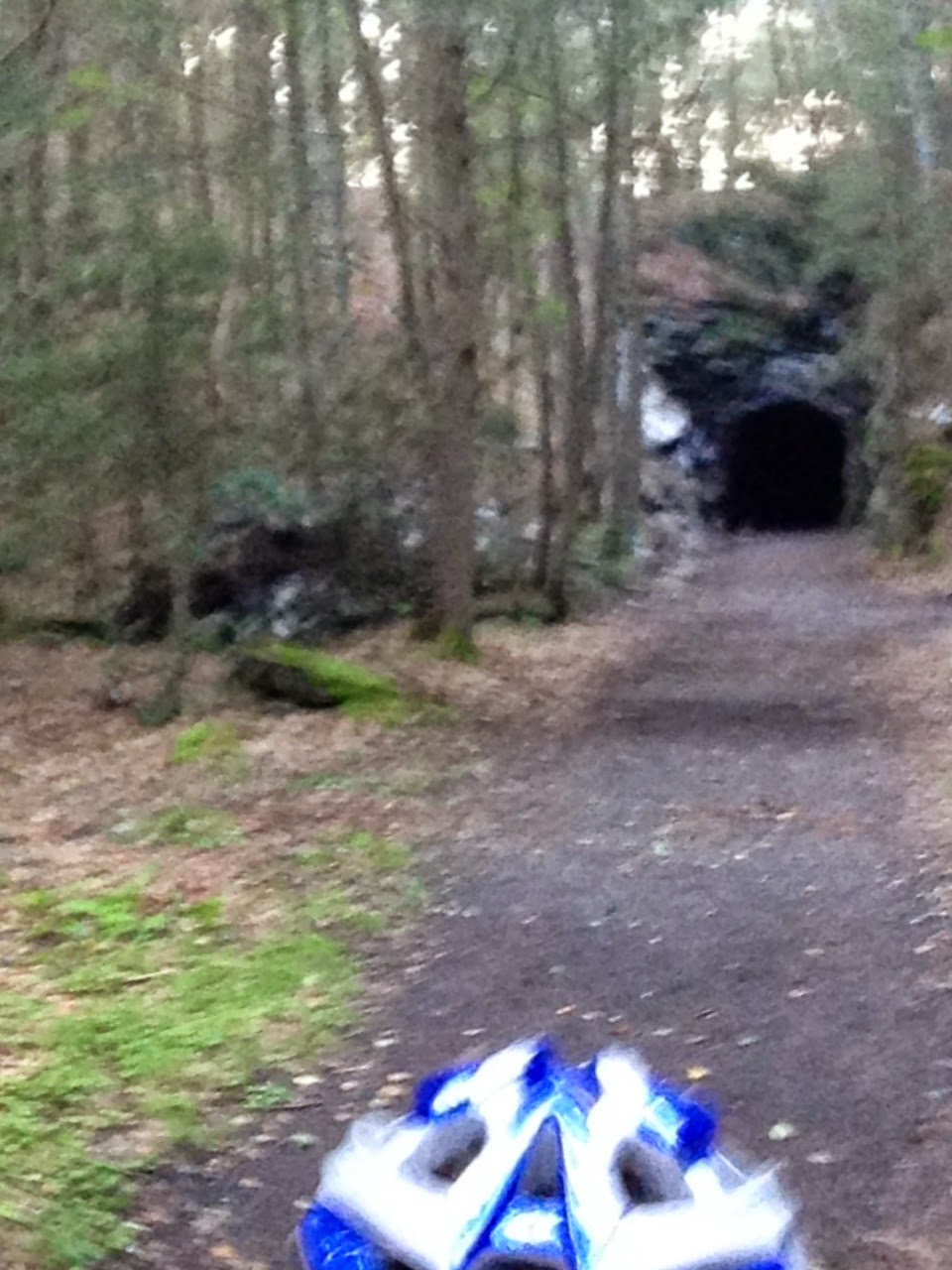 It appears that the tunnel floor has been regraded and it was totally smooth and not as muddy as I was expecting.  It's a blast to plunge into total darkness on the bike and then to emerge into the light again on the other side. 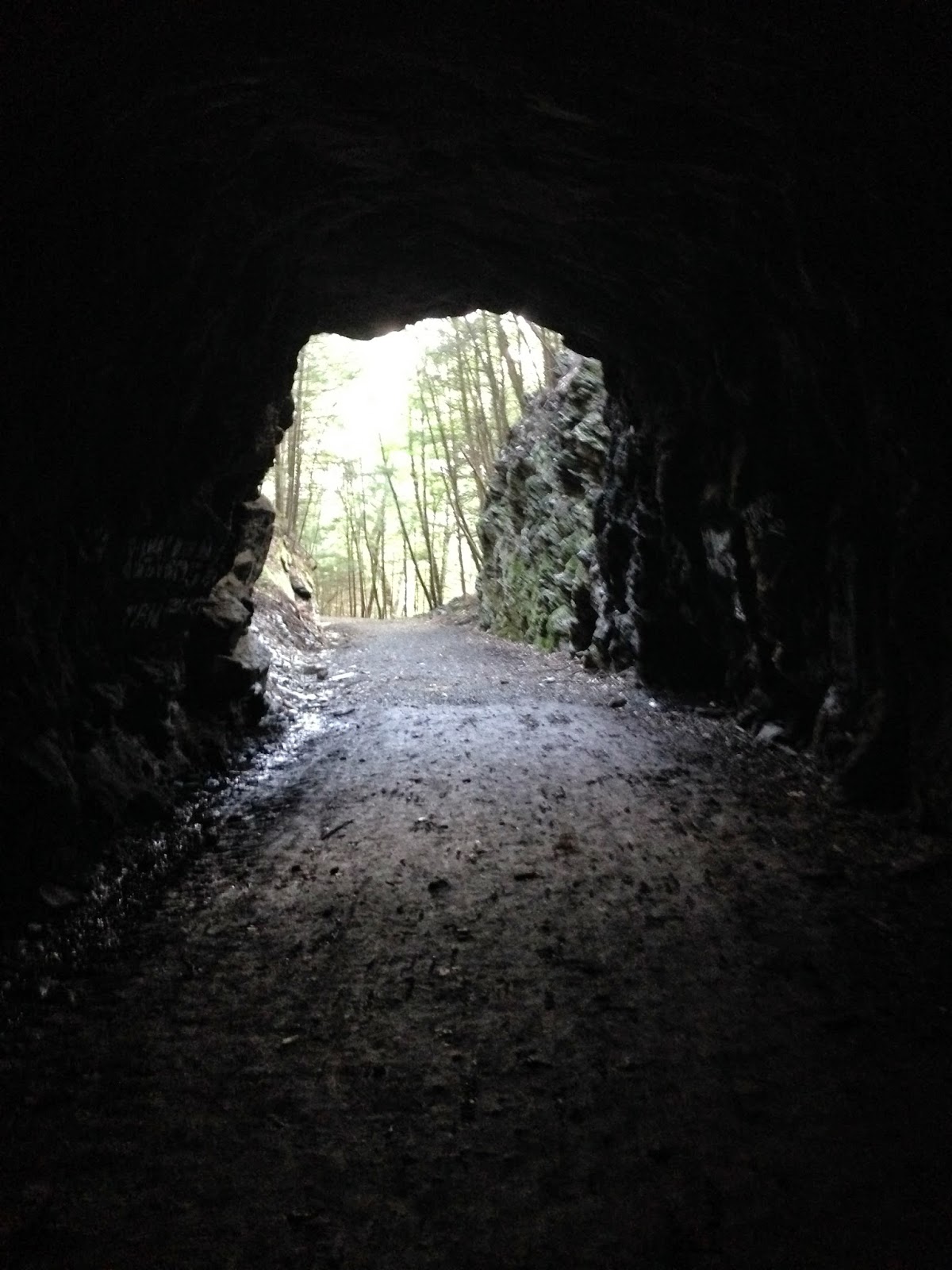 After the tunnel and down by the power lines, someone fell a few trees to block the roadbed even more then what had been done in the past.  It's does, at that point, go on to private property and really has no exit from there except for some hike-a-bike singletrack that linked it to the gate at Tunnel Road, that I have only ridden once but it never felt right.  However, who ever did the work also blocked the short cut trail to the utility access road, too.  It just meant that you had to ride up further and then take a hairpin turn to get onto the utility access road. 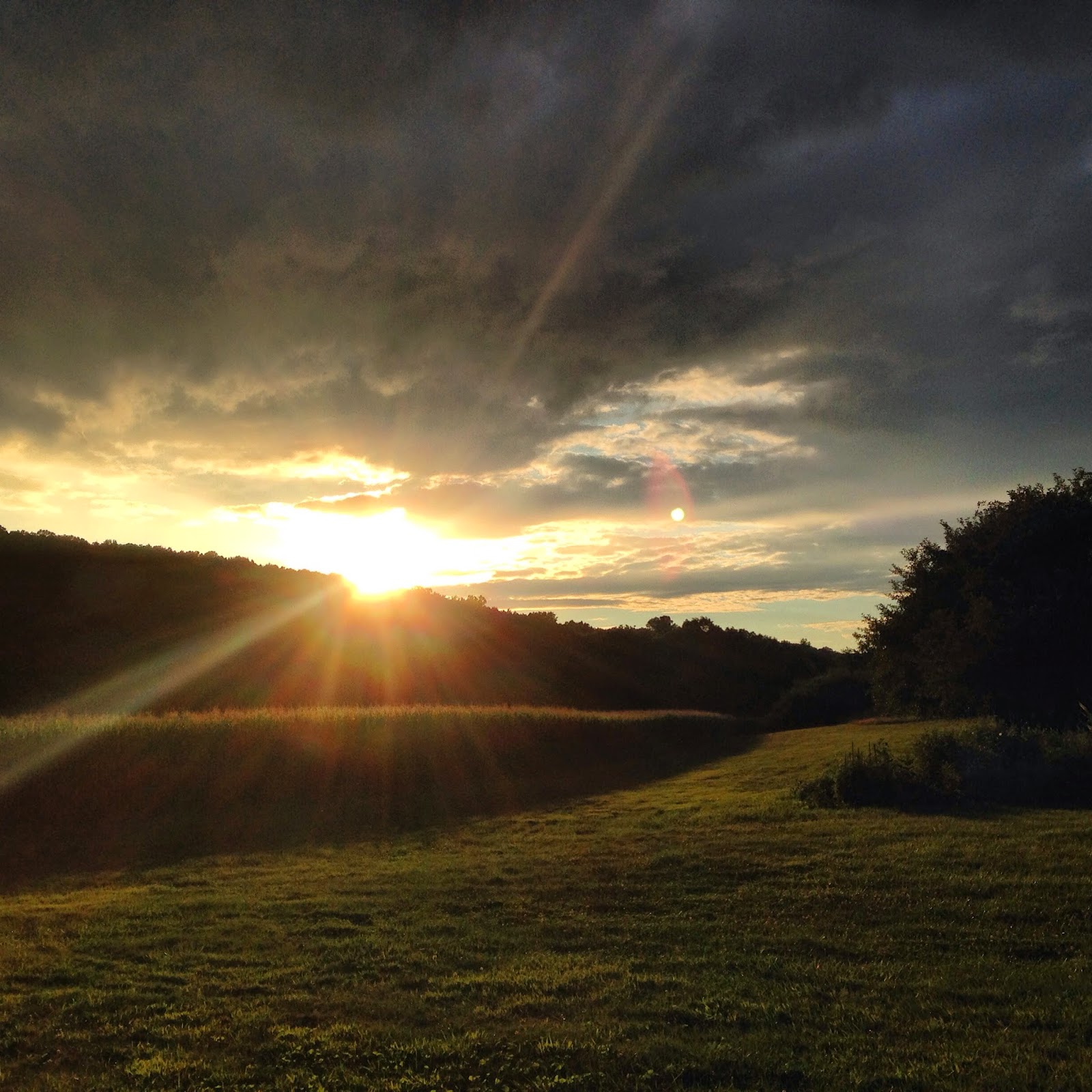 I rode with two layers again and it was smart that I did so because riding down through South Britain, with down behind the hills, it got much colder than I thought it would, and this is August!  By exit 14 in Southbury, the sun was setting I still had 8 miles to go!  It was time for the lights, that I brought as a safety precaution.