I took another look at the map on the Bike Reg page and did my best to approximate the route for next week's Cyclocross Race in Newtown.  Saturday's early snow seemed to have taken everyone by surprise so when I started riding at Fairfield Hills I had the whole place to myself. 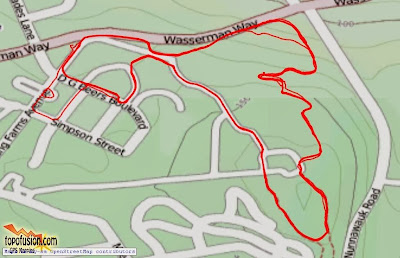 Since I wouldn't be riding sections that were going to be marked with poles and tape I threw in some extra singletrack using the horse trails behind the water tanks.  The route also has a big tree down which I could use to simulate a barrier.  That section of singletrack is always fun to ride because it has a little bit of everything; roots, rocks, and lots of dirt, only today it was just snow. 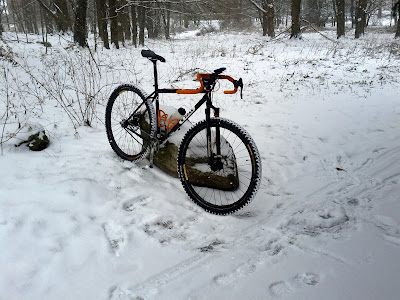 The Qball was dialed in perfectly for this route and the snowy conditions were perfect for the gearing I went with, in fact if it wasn't snowy I think I would have been undergeared by a tooth or two.  The hardest thing, however, was keeping my toes warm.  I probably should have worn the over booties! 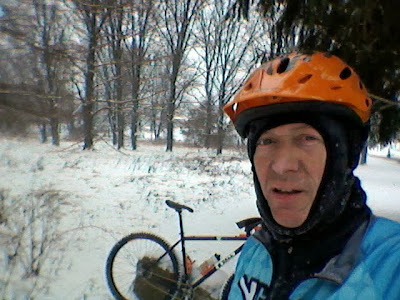 While I haven't ridden a lot of different terrain this way I think I could really get into cyclocross racing.  It seems to bring out all sorts of crazy riders in various states of dress and visual depravity!  Cyclocrossing racing reminds of the On On after good Hash with lots of good beer!

This was taken at the Ice Weasels Cometh Cyclocross Race in Rowley, MA.  It looks like a lot of fun and she has an awesome pair of wheels on that bike!  I have definitely found my calling! 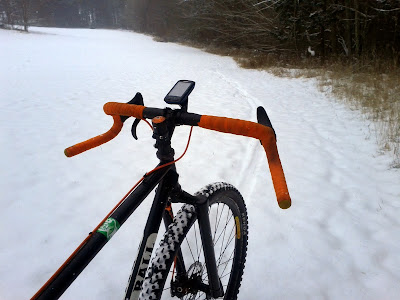 Descending down to the bottom of Yahoo Hill was fun because you pick up a lot of speed and in the snow it's almost like floating.  The only thing I question in the route is whether it will cut west sooner so that you don't have to go all the way to bottom of Yahoo Hill.  For the four of the five laps that I rode, I did just that and was able to get up most of it but there were still Napoleon Death March elements to that section.  If it cuts higher like I did on my fifth lap then it won't be so bad, it will still suck, but not suck as much. 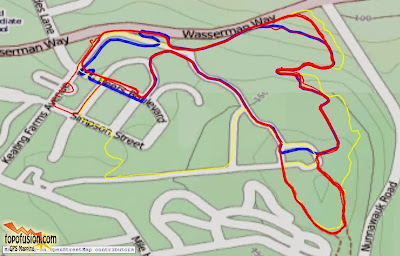 I think I am going to have to find more places to ride Cyclocross, or my case Monster Cross, meaning more trails and fire roads.  Over the holidays I am definitely going to give it a go in Roxbury and Washington and if I can climb those hills with this gearing then I am going to be set for D2R2!
at 6:23 PM