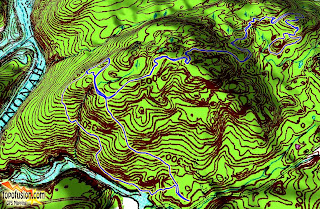 After yesterday's debacle on the Gussy, dropped chain 3 times (my fault, should have tightened it after the first time it dropped) and my first ever pinch flat on the Gussy, it got me thinking what am I gonna do with this bike.  It was bound to happen and it probably could have been avoided if I took better care but the days are getting shorter and I knew that if I screwed around after getting home late from work there would be no ride.  Chain tension on a Single Speed is paramount! 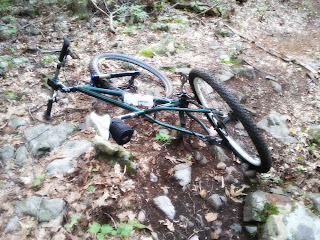 Getting home and cleaning up I decided it was time to switch bikes, that is to start moving parts off the Kona to the Raleigh.  I also decided to try the FUBars on the Spot, too, since I wanted to run titanium bars on the Raleigh. 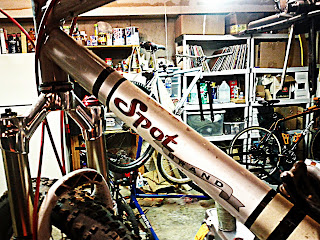 I made one mistake, as I found out during today's ride, I put the shifter pod inside of the brake lever and the grip when it should have been on the outside.  This impacted how much grip real estate I could grab onto because the trigger shifter was in the way.  If fixed that afterwards. 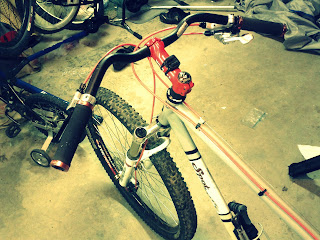 Besides the placement issue with the shifter pod the climb up Poly Brody's Backside was pretty good as I adjusted to the new hand positions withe the FUBars.  Between the jalopy and blue trail I contemplated scrubbing the ride but decided to push on into the ass kicker section, where the steepest section is a 22% grade, I discovered the power of these bars which is they force you to stay seated in order to climb.  After that, I started to develop a groove with these bars that made the ride even better. 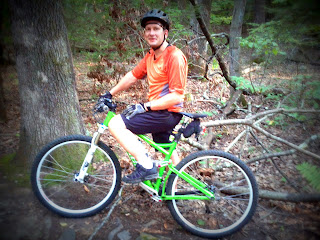 I met this guy Vance coming up the Gussy as I was going down the trail.  Like me, he rides from his house and rides here a lot.  Never seen him before.  I ride here a lot, too, but this is the first time I ran into him.  Upper Paugussett is turning into quite the mountain biking destination.  I am encountering people all the time on the trail now and now that I am into the social aspects of riding using Strava I can see that there are quite a few other people that are riding it regularly. 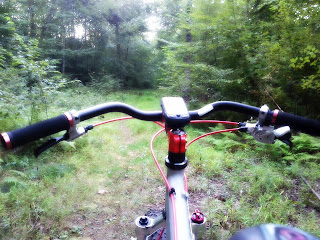 The final rip down the Mulikin was AWESOME!  The on thing I could use with these bars is if they were a little bit wider but I am really liking them and already thinking about the next ride with them, Waldo perhaps?  In fact what I want to try next is riding from my house to Waldo and back utilizing some of the trails behind the Vineyard and the old railroad bed. 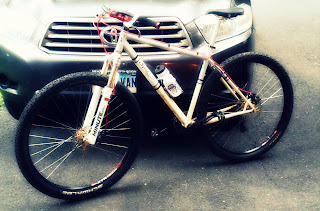 During the ride I did make a final decision on the Kona and that is to strip it down and put all the good stuff on the Raleigh.  In fact, I think I am going to put the Reba RL fork on the Spot but ride the Carver Carbon Fiber fork for a while on the Raleigh before trying the Manitou Minute 29er.  I think the Minute is better suited for single speeding because you can adjust how much travel you want as opposed to the Reba where it's all open or closed.  When I ride single speed I have always been of the opinion that it would be best to ride with just enough travel to take the edge off the trail.  Will all the extra parts, I now have more stuff to try out and see what I like best! 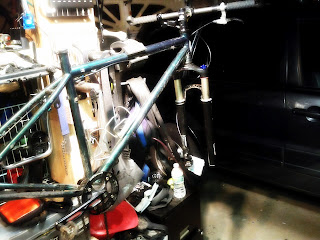 Not sure whether or not to sell the Kona at this point.  It was a great bike, and fun, but just a tad small.  I have enough parts now to build it back up into a descent bike, which I might do this winter if the Farmer's Almanac proves to be true in it's predictions and all I can do is XC ski and snowshoe.
at 6:59 AM