I couldn't say no when Bill Boles offered to lead another early morning ride at another location called Exit 7 or Willow Street. 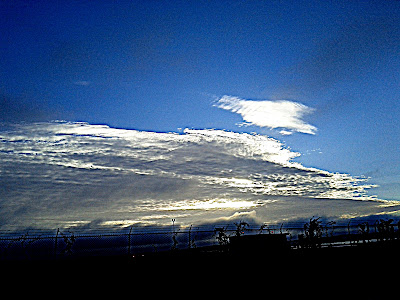 However, yesterday's weather finally moved off the Cape but still dumped at least 3 inches of rain on the Cape!  If it was raining this morning it meant the ride was off but that wasn't the case this morning!  Additionally, this place is really well drained.. 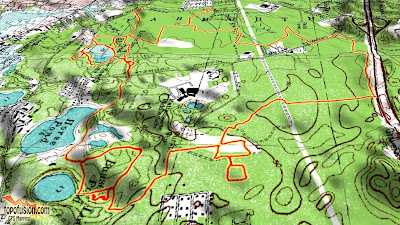 In fact, he put the word out and there were a few others that showed up, too.  Steve, from the Trail of Tears ride, wanted to come, too, but discovered his rim had a hole and needed a new rim. 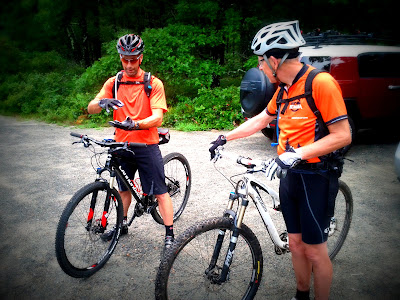 There was Gene from Oswego, NY, who like me was vacation on the Cape this week and Karen (not pictured) who lives and works on the Cape.  We headed across the street from the parking area and the trails were incredibly buff! 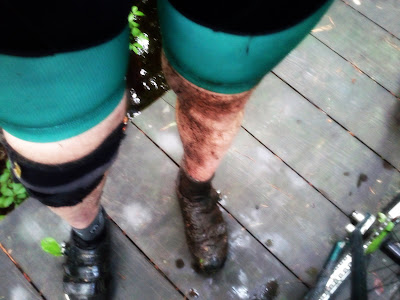 Bill took us on this somewhat overgrown trail that paralleled a stream.  I tried riding a board over what looked like a soft spot only to slip off and would up sinking in mud above my knee and having my bike mired  in the mud, too. 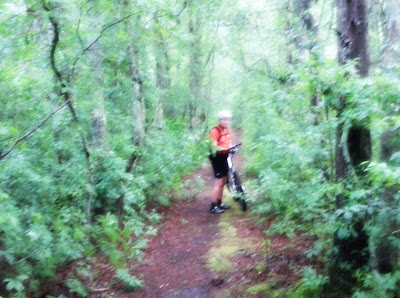 Of course Bill wanted to know what took us so long. 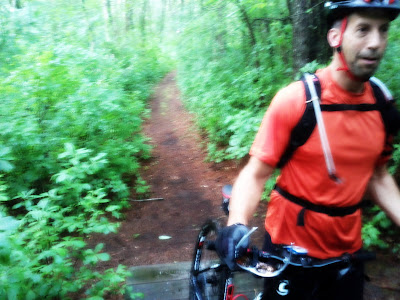 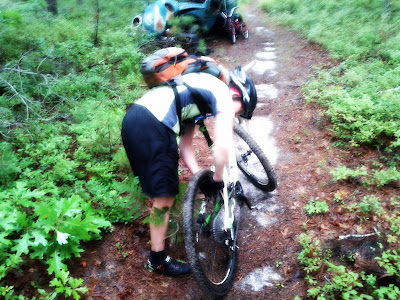 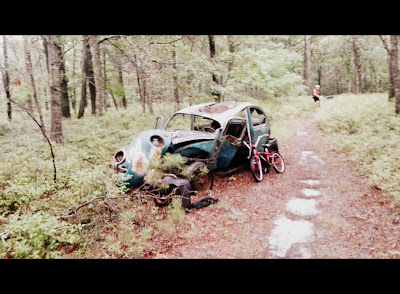 Hi Mark-
Hope you've enjoyed the riding down here, I've been enjoying the reports.
Fyi, there's another trail system directly across Willow St from the northwest corner of where you were. It's just south of the Rt 6 overpass on the other side of Willow - you can see the trail head just on the other side of the train tracks. Really cool, buff, fast trails with some short steeps. About 13 miles total.
Then on the other side of Rt 6, in the northeast corner down Summer St, is a trail system that runs through Greenough Boy Scout Camp. Fun trails, about another 5 miles. Definitely worth checking out next time you're here, and I'll be happy to take you out there.
Happy riding,
Finn

Hey Mark. I hope my roadie, tri geek friends don't see this. They will never ride with me again. They think I have gone over to the dark side anyway.

@Finn, thanks. Looks like I am going to have to hit that next year. I did another road ride today and I am wiped!

@Gene, thanks again for the Tube! I always thought the Dark Side was road riding.

Mark let me know if you ever come up to NY. I will take you on my power line ride that you will want a full suspension bike for. Two - four hours of gravel and rock gardens. Some good climbing and lots of fast pace.
Gene