Took my fixed gear mountain bike, Raleigh XXIX, to the Blow Hole, aka River Highlands State Park, Wednesday after work to ride with Connecticut NEMBA's pre-meeting ride.  Only I got there late and everyone took off without me.  That was OK because I sort of wanted to be alone anyway so that I could concentrate on the nuances of riding single track on a fixed gear. 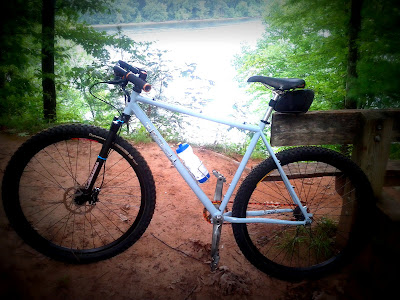 The Blow Hole is the perfect place to do this because it has the least technical trails in the state.  Being that it's on the banks of the Connecticut River, this place basically one big silt plain from when the River was much wider back in the pre-historic times making the singletrack smooth as butter!  Riding the fixed gear was fun and I rarely had to use the brake because I kept my speed in good control the whole time.  Still, getting over the larger obstacles was still problematic.  The trick for me is pedal alignment, if either pedal is not a point where I apply the force that I need that helps me pop the front wheel up I am screwed.  Those times I was able to do it I just have to keep reminding myself to keep pedaling! 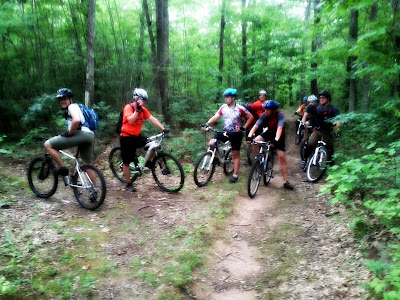 Knowing that Glenn would most likely be leading the ride I figured I would run into the group by riding his typical route in reverse and as you can see I did.  From here we rode the new Sidewinder Trail, which is akin to the one at Kingdom Trails, only much smaller and a little hastily done.  The first turn, riding it with fixed gear mountain bike, was difficult and I had to stop to make it.  Even Paula said that turn needs a lot of work but if I were to do it again I bet I could have done it without a stop.  The rest of undulations of the half pipe were great and I can't wait to come back with a geared bike to have some real fun. 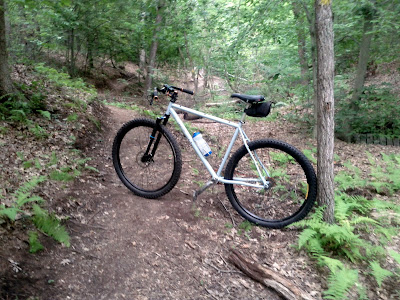