A year ago, my son Elliot, did not want to give up his training wheels.  I did everything I could to get him to loose the training wheels.  Running behind him while holding the bike, rolling down a grassy incline, bribery, nothing worked.  Then one day, he picked up the bike, literally, and started riding! 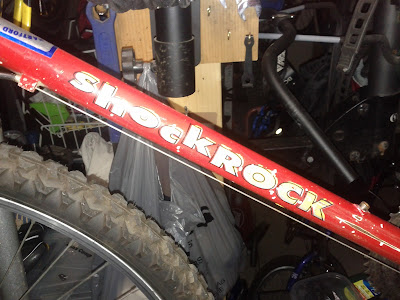 Last year I bought my oldest child Katie a Cannondale Chase, a real kids mountain bike with 26" wheels. The new addition to the stable meant something had to go and since Elliot seemed far from progressing, I gave Katie's old (20" geared) bike to the neighbor boy who was still rolling a 12" wheeled bike. So Elliot asks me the other day why did I give the neighbor Katie's old bike with gears. I told him my reasoning and he then asks if I can ask for it back.  I had to explain to him my reasoning and why I wasn't going to ask for it back, at the same time implying the philosophy of snooze, you loose but it's hard saying no to your kids, especially one that wants to take up an activity that's near and dear to me. 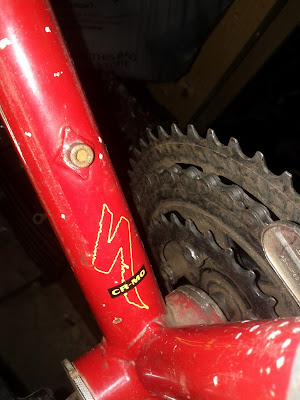 It's not Christmas, his birthday is past, and I really don't have $300 to plunk down on a new bike that I know will get left out in the rain a few times as well as not treated the same way I treat my bikes.  Going to a big box store was out of the question because that is against my biking morals.  So I hit Craigslist in search of the right bike and I can't believe that I was lucky to find what I found. 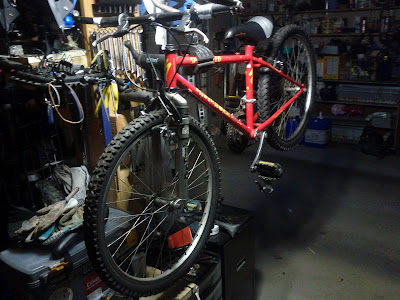 What I found is a Specialized Hotrock, that is CroMoly tubing, Spanish BB, and Cantilever brakes.  Not much history on these bikes from the Interwebs, however based on what I could see from successive models my guess is that this bike was built sometime in the mid 1990s. 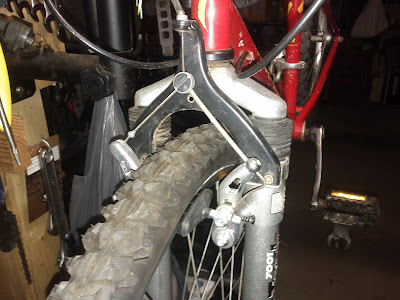 It's got scratches but no rust!  The rear tire is warn more than the front, the shock doesn't have any spring in it, and it's still pretty heavy but not only does it have gears but it also has both a Granny and big ring upfront 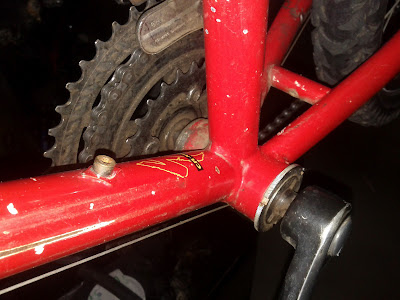 With this gearing range, Elliot won't be dabbing on the driveway anymore and he might even start climbing the front hill! 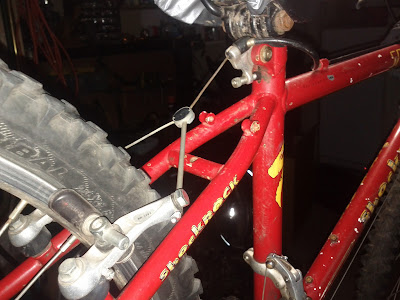 It might look a little ratty but's got legs and it's the perfect bike for Elliot to get comfortable on with gears.  In fact shifting is really smooth and exact.  This bike has seen miles but it's definitely been looked after.  In 2 years he'll be 10 but at his current growth rate we might have to skip the kids mountain bike (26" wheels) and go right to a 29er! 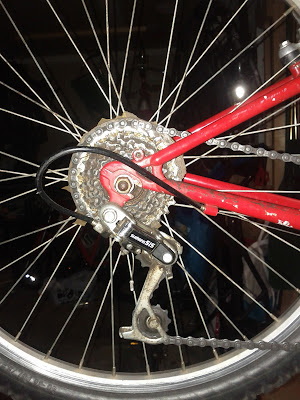 The only updates I am going to make for it now is a different saddle.  Going to have to see how Grip Shifters work for him, otherwise I might have to go to Thumbies, or I might just throw some triggers on there to get him ready for the next bike.  I wonder how SRAM X3 components will work on this bike.