Maybe this is old news but Vassago, manufacturer of the infamous Jabberwocky, has bit the dust!  While I was never a fan of the vanilla horizontal drop Vassago had a tensioner add on that I think, made all the difference.  Of course, it was sold separately and that was probably a mistake, it should have been included.

**Press Release**
After acquiring Vassago Cycles LLC, IUD inc. to cease all remaining operations of Vassago Cycles effective Feburary 2012.  All current inventory has been liquidated including but not limited to 2012 model year steel, carbon fiber and suspension 29er frames, in addition to hardware, apparel and computer equipment.
Brand IP, trademarks, pending patents and tooling to be released to auction.
prnewswire.com 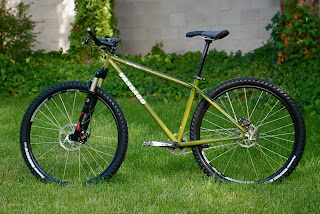 Something about green on a bike frame gets me excited!  Dark green doesn't do it for me, so the Kona Unit 29, while it's an awesome bike, it's dark green frame color doesn't move me.  The split pea soup color of the Jabber was hot.  Below are the Jabbernutz which is an incredible little add on that completely revolutionizes horizontal drops.