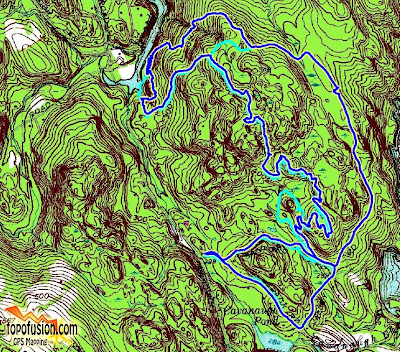 Taking advantage of this lovely spring weather I headed out for another rip at Upper P after work.  While it was hot there was a slight breeze at times that made the heat bearable most times, that is if I wasn't climbing.  Took the forest road this time and the tree is still blocking the road so I took the detour only it appears other have found it too and the transition through the stone wall was really sketchy causing me to almost go OTB.  I quickly fixed the situation and continued riding. 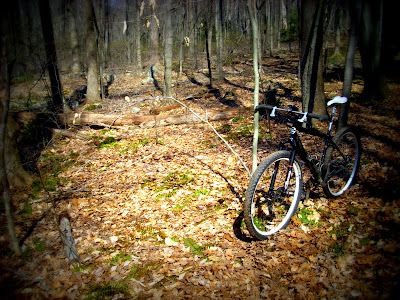 Headed back to the Mulikin, which by the way is not a new trail.  In fact, when I first started riding at Upper Paugussett this was one of my main trails.  The Mulikin is a series of skidder paths from earlier logging opperations and an old cart road and by cart I mean horse drawn.  The cart road is too narrow for a modern day vehicle but the interesting thing is that it was engineered, that is graded and benched on steep inclines.

At the point where I took the picture of the Kona (above), which is a bypass that I have been riding over the years to get around the muddy section of where the white trail comes in, I turned to my left and saw the sweetest looking roller!  It has to be about 30 to 40 long and probably a 60 or 70 degree pitch with a sweet tranny.  Next time out I am going to ride it.

I poked around at the bottom of the Mulikin, where it meets the Blue Trail, to see if there is a way to bypass the Blue Trail but the side of the hill is just way too steep and to put a trail in there you would have to cut serious bench.  It would be awesome but I doubt I could get permission.  I might ask later in the summer.  Try and work it in as a reroute around that exposed root section. 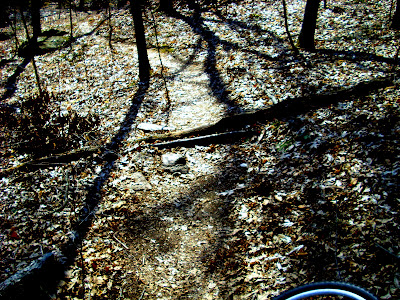 The heat was taking it's toll.  I walked the steep section on forest road back to the Gussy and took a few breaks along the way.  I did finally take out this old tree that I found is a major buzz kill when you roll into this short climb.  In fact, I am thinking about taking all the little up and overs out in order to make the trail even more flowy. 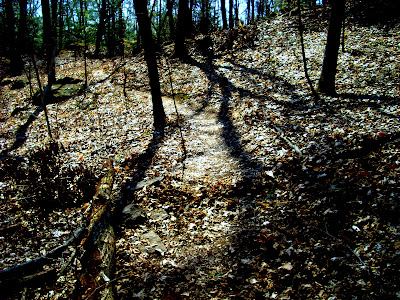 Speaking of flow and reroutes I am thinking about another major reroute.  There is a turn that is getting well worn in and it now get's muddy when ever there is prolonged wet weather.  When you descend from the second roller after the ROW that section through there up the hairpin turn has always been nagging on me and thus I might have found a way to incorporate part of the Reach Around and eliminate the hairpin turn at the same time while making that descent more flowy.
at 7:43 AM