Elliot and the Great Stride Race

My son Elliot, has Optic Nerve Hypoplasia, or ONH, which is an under developed optic nerve and it means he is legally blind.  He can see but his condition means he can't hold his eyes still like you or eye facing forwards and thus his eyes move from side to side, or what the doctors say, shake.  Three years ago we got him into skiing through an Adaptive Skiing program called Stride Adaptive Sports through Ski Sundown.  At the end of the skiing season Stride holds a race at Jiminy Peak for all the program participants and it's amazing to see these kids from all over region tearing the course up!  Afterwards, the smiles on their faces  at the awards ceremony are priceless.

With his second gold medal under his belt Elliot now wants to join a ski team and start racing more than just at the end of the season!  Seeing his smiles and his jubilation at his accomplishment is the best feeling a father can have.  In fact, he wants me to try racing. 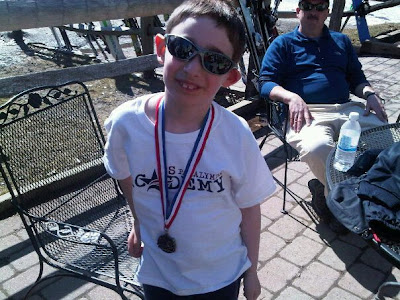 Email ThisBlogThis!Share to TwitterShare to FacebookShare to Pinterest
Labels: skiing