Some sweet Italian Leather for my fourth point of contact!

One of my buddies remarked when I first showed the Bianchi sporting a Brooks Saddle that I needed some sweet Italian Leather for this bike so I picked up this nice, older model Vetta saddle for the bike and this is the first opportunity I have had to show it off.  If you are a regular reader of Cyclesnack you know that I had Arthoscopic surgery on my knee two weeks ago and the healing process has been going very well.  Unlike my wife who had major knee surgery almost two months ago (she doesn't even ride) and couldn't walk for a week, I walked immediately following the procedure and have been on hobbling around ever since. 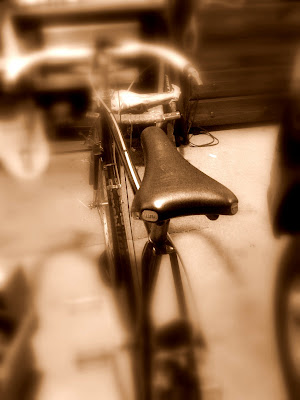 However, this morning, I threw a leg over the Bianchi and took a few strokes.  That first pedal stroke was an eye opener to say the least but after that it started to feel better.  I only pedaled for 5 minutes and it was gingerly at best, however, someone mentioned just today after hearing about this event that I should really try pedaling out of the saddle to make the hip and upper thigh muscles do more of the work.  So, I am going to have to try that, maybe later today. 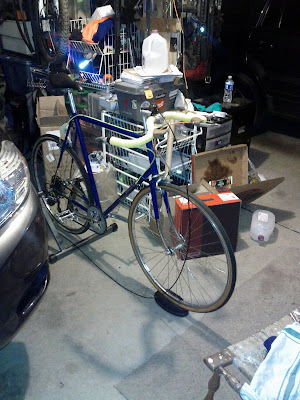 Closing out 2011, there were a lot of changes in my biking.  Added some bikes to the stable, including the Bianchi, Misfit diSSent, Kona Unit, and the Ross Riveria.  Leaving the stable (see former lovers) was the Dillinger, the Death Fork (Lambert Grand Prix), and the beloved Marin Stinson.  Also picked up two frames this year that I am still in the process of acquiring parts for their builds, a Centurion Ironman Dave Scott Expert and a Spot Longboard 9.  All I need for the Spot is a Drive Train and I will start the build.  Since getting the Bianchi I am now up in the air on what to do with it.  I have fixed gear wheelset that I got last year so I am thinking this is going to be my next fixed gear project. 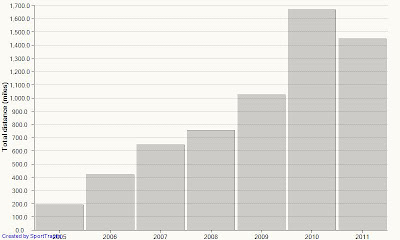 I didn't hit my riding goal this year, though.  I was shooting for 1000 miles commuting and 750 mountain biking, with a total goal of 2000 miles.  Last year's winter snows hampered some of that, blew my mountain bike training and I stopped commuting about summer time this year because work got too busy and then they closed the gym.  So, next year I am going to shoot for the 2000 mile mark.