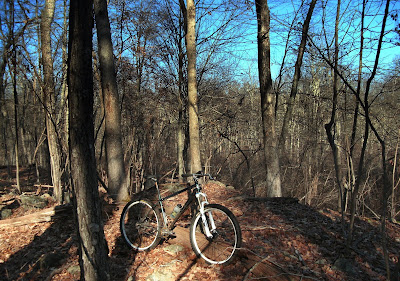 After doing 20 miles and 2000+ feet of climbing on the Monster Cross this weekend on the Roxbury Randonee I figured it was time to spread the love and give the Kona a spin.  In comparisson to the Qball Monster Cross riding the Kona was heaven.  It felt so fast and nimble I was at a loss as to why I took so much time off from this bike.  Oh yeah, the knee.  The Kona just feels right as a far as a Single Speed mountain bike goes.  I think I may need to get one more spin on it before my arthroscopic surgery next week.  The good news is the doctor says I should start pedaling two or three days after the surgery.  Hello trainer, then when I can start riding again looks like I will be riding rail trails for awhile. 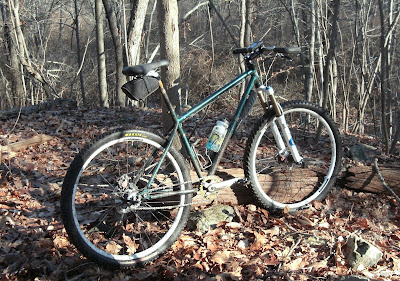 While riding Upper Paugussett time and time again may seem old after awhile it's nice being able to just hop on the bike and be in the woods in 10 minutes.  Granted the pedal up the Poly Brody Forest Road is not what I would call the most challenging terrain but it's better than riding pavement.  The real fun is riding the Upper Gussy Trail.  All the recent improvements to the trail are making the ride really flowy and fun.  In fact, those of you that have been riding the Gussy may have noticed that I have started taking out the log overs, like the two at the Cleavage Re-Route and that one where you have turn 90 deg to get over after the climb up from the two stream crossings.  I will probably take a few more out, basically finishing the remaining blow downs but going to keep the ones at the beginning and end of the trail, as well as those that have been around for awhile, too. 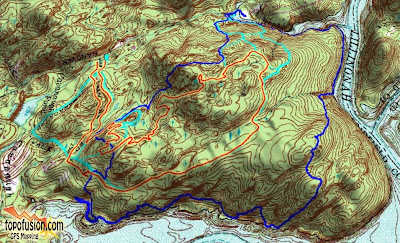 The other day a friend of mine hiked all the Blue Trail at Upper Paugussett and sent me the GPS track so I thought I would incorporate it with my ride map to give you some perspective of where the Poly Brody and Gussy Trail.  Although I know some people ride this trail, some of it's considered multi-use and others would say that you shouldn't bike at all on it, my personal feeling is that if it's on public land then it's fair game.  That is of course if it's worthy of riding, personally I think it's a really crappy trail to ride and sections that are so wet that they don't even dry out in the summer.  Apparently, after the stormy weather we had this year this trail has gotten no TM and is absolute crap with blowdowns and blockages galore.  On the other hand, the Upper Gussy and Poly Brody are clear and ready to ride!
at 6:00 AM