Riding the Monster in the Blow Hole 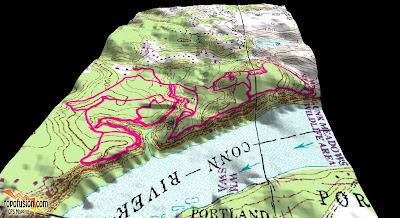 I guess you could call this the season opener for quite a few us with spring like conditions finally taking hold and most places being dry enough to ride.  CT NEMBA held it's first member's ride at the Blow Hole, aka River Highlands State Park.  While there are some really steep and fun descents, along with some pump track features on some of the trails the Blow Hole is not a terribly difficult, nor technical place to ride.  However, it was a good place to visit after a long hiatus of not riding. 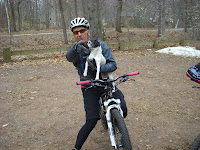 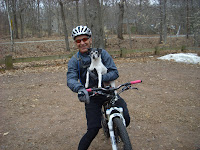 We had a great turn out that included Glenn Vernes, Al Tinti, pictured above trying to get Brett's dog to smile for the camera, Brett Metzger, Ed Perten, Salem Mazzawy, Jim Senner, and Brendan Mahoney.  Brett had his two little dogs that were perfect trail dogs. 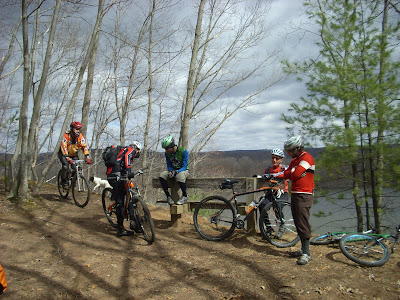 We stopped off at the overlook on the Connecticut River for snacks and to check gear.  While not technically a mechanical Jim was experiencing a little issue with his SRAM XX drive train that Brendan and Salem found intriguing. 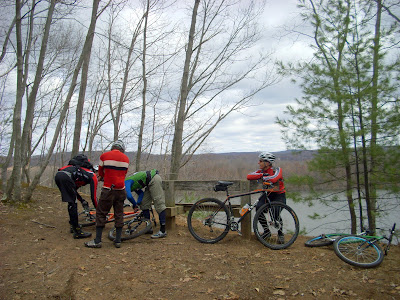 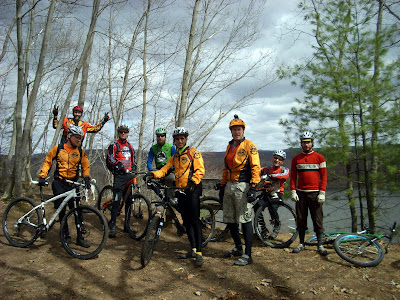 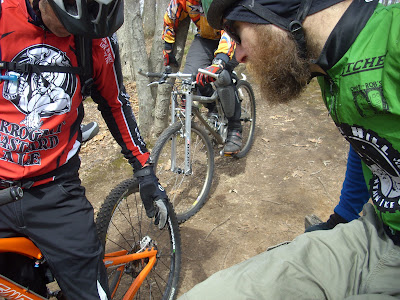 Brett came to the party on a vintage full suspension bike 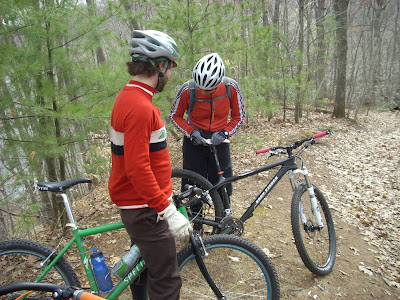 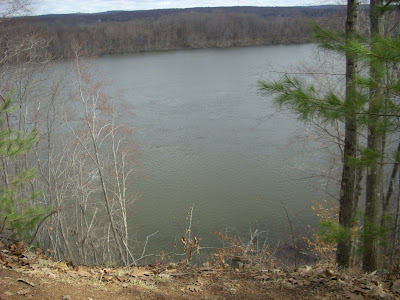 Looking out over the Connecticut River 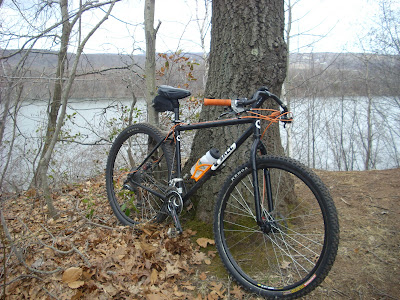 I rode the Qball MCX today and every ride on this bike just gets better and better.  It was the first time being off road with the Fme bars and they performed reasonably well.  I did, however, have them slip after doing some small hucks.  While the width is OK they could still be a little wider I think I need to put on a longer stem.  I was also rolling on Kenda Klaw 29x1.95s and they were surprisingly comfortable, then again, the Blow Hole is pretty buff.  Overall it was fun riding the Qball, rigid, and can't wait to do it some more.  We'll see how it goes with the Fme's because I kind of considering switching over to my FUbars and use the Fme's on the Surly 1x1 I want to eventually get.
at 1:52 AM

great photos guys, looks like it was a good ride.

How many miles for the Nemba ride?

It was almost 8 miles. Nice to finally see some trail.

Thank you for the invite and smooth flowing ride on a trail I have not seen since maybe '98 on a dirtbike...
Great bunch of riders with some nice bikes!
My bike (this ride) was a
ProFlex 856 with coil shocks (not elastomer)... It is For Sale, if anyone is interested (Small/Medium frame is a touch small for my 5'10" stature... Near MINT with 4 rides on it! Trades welcome!