I think I might have said that I would no longer commute in temps below 25 degrees but the forecast for Tuesday was 40 in the afternoon and my new seating arrangement got me jonesin' for another fix. Also, weather forecast for Thursday was rain so I decided to suck it up and ride below my temperature threshold this morning.  I have ridden in colder weather but it's just not as fun because you are really fighting/working just to stay warm.  My other concern was road conditions because Sunday night where we got upwards of 4 inches of rain that caused massive flooding in our area and there were many road closures throughout the area.
The water that was still on the roads froze overnight making for a dangerous combination of black ice in some parts as well as areas impossible to ride through, mostly on the back roads that I usually ride to work.  I found that to be especially true for Pond Brook Rd because after the bridge it was one long, icy, muddy thoroughfare.  I turned around and opted for the longer route to work but when I got back to my driveway I realized I needed another layer because it was a lot colder than I expected.  Also realized I forgot to bring the trash to the curb, so there were a few setbacks before the commute officially got underway.

I have been looking at the maps and trying to mix in a little more backroad into the route.  I tried Sugar Lane this morning but it had a lot of ice on it making riding through there treacherous so I couldn't go very fast.  By this time I was running kind of late anyway and didn't have a chance to try the other roads so next time I ride to work, I am going add some variation to the route that includes Sugar Lane over to Taunton Hill, and some other back roads. 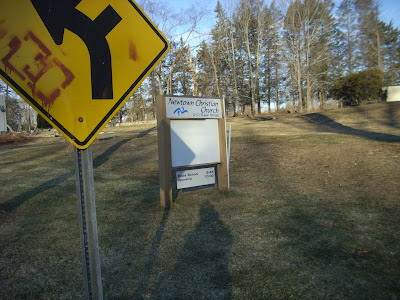 No spiritual or uplifting messages at the Newtown Christian Church sign this morning.  A week ago there was probably 2 feet of snow around the sign and the Pastor probably couldn't get to it.  Hopefully, next time through here there will be something more uplifting.  Being out on the bike, early in the morning is my spiritual uplift. Made a little video riding down Rt 302 and then down Hawleyville Rd in Bethel.


When I got to the office, I looked at my bike and saw a quarter inch of frozen grim on the undersides and new that was going to melt onto the carpet of my office.  Thinking quickly, I got some trays from the kitchen and put them underneath to catch the melt. 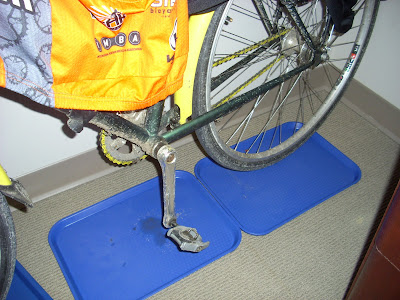 I am still looking for that perfect position to mount the camera rearwards.  Below I tried it on the seatpost and while the video came out cool, especially with the spray in the sunlight my leg was hitting the camera.  I need to move it up higher, which means removing my seat pack.

The route home was pretty business as usual, riding over to Walnut Hill I came across a house with a flooded backyard.  That really sucks. 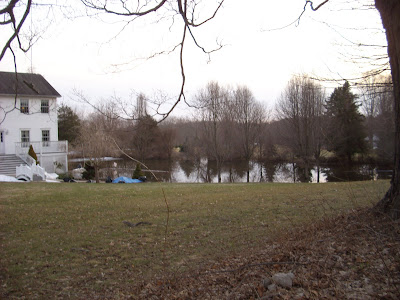 Then I hit Old Bethel Road which is my favorite stretch with it's rolling hills and sweeping curves, perfect Subrural-Urban fixie riding and of course I shot another video out the back.

While I love my fixie I hate descending big hills.  I am actually getting better controlling my descents by reversing the pressure on the pedals while descending but I much prefer the flattest way home so I usually opt for Pond Brook.  Seeing how it was a nightmare this morning I had hoped that it would have been loosened up by now.  On the way, this car with a mountain bike on the back passed me and I didn't get a real good glimpse at it but it almost looked like a rigid, ss, 29er.  The picture I lifted off the camera wasn't too clear either.  The question I had to ask, is where you riding? 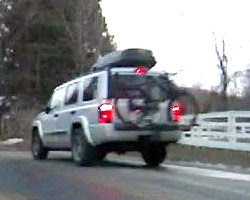