The Friday Fix: Fixing the Fixie 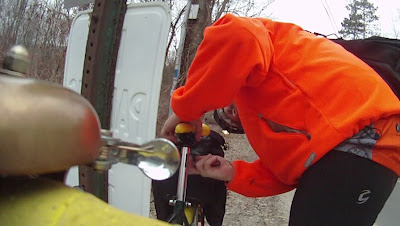 Last week, while riding home I had to make a little adjustment to my seatpost and I took this picture off my bars.  The 400 mm seat post and the long stem means I am now stretched out like a like to be.  Now, if the weather would cooperate and I don't have any more vagisil moments during the week I am going to get down to some serious pedaling. 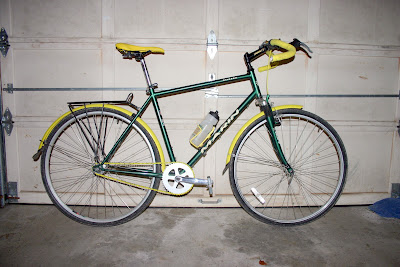 The other day, I was at the Goodie Shop picking up some parts and got this crankset for $10, which I think it's off BMX bike.  Taking off my old Suginios I looked at the old chain ring and discovered that it was 38t!  And all this time I thought I was riding a 42t!  The new chainring is a 44t and to get close to the Sheldon Brown Standard (42:15) I would need a 16t.  Since I don't have one, I stuck with the 15, so we'll see what it's like later this morning. 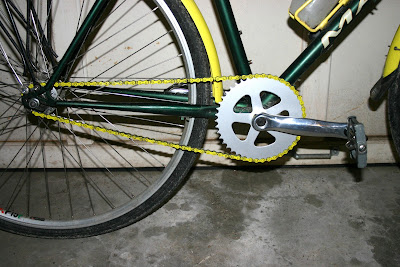 No matter how many times I think it would be fun to coast in certain places the challenges of riding fix, for me, seem to greatly outweigh being able to coast down hills.  Not to mention the benefits of riding fix keep piling up because up until the time I started riding fixed I was always a lousy climber on my mountain bike but now I am a much better climber.
There don't appear to be many fixie riders in my area which is called the foothills of the Berkshires which includes Northern Fairfield and New Haven Counties, as well as Southern Litchfield County.  In fact the only other nearby fixie rider that I know of in this area lives down in Wilton and has a blog called iBike 29er.  I credit Pete for getting me into this type of riding.  Another fixie rider, and (semi) professional single speed, mountain bike racer, lives up in West Hartford and the author of Charlie Rides a Bike.  There might be a fixie rider or two in the BeatBikeBlog, too.  Who else rides fixed here in Connecticut?

Is it the topography that scares people?  There was a guy at the Goodie Shop eyeballin a fixie and he was asking all sorts of questions that I jumped in to answer.  He chief concern was going downhill and not being able to coast.  That is when I told him that is one of the major training benefits of riding fixed because you have to learn to control your descents  so that you don't look like a gerbil in a HabiTrail.  Do those things still exist, or have they been taken over by Zhu Zhu pests?

One thing for sure is that unless you started riding in a more metropolitan environment the chances of anyone getting into fixed gear riding seems to go way, way down.
at 6:11 AM