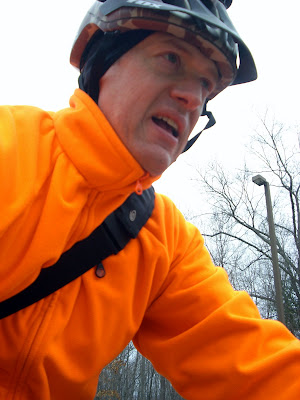 It was a crisp 23 degrees when I left the house this morning.  Funny, it seems to be getting colder and colder when it should be getting warmer.  A week ago, it was 24 degrees and we even saw some temps around 20 degrees last week. Granted, week over week I couldn't tell the difference between last week and today.  One thing is for certain I think I would rather wear my blaze orange windstopper fleece than a riding jacket with a fleece vest.  Not once was I uncomfortable as I was last week.  Leaving kind of late, I took the shortest way to work, 9.5 miles.
Riding by this house on Walnut Hill Rd in Bethel, last Tuesday their side yard was a pond (left) and a week later the waters have receded somewhat. 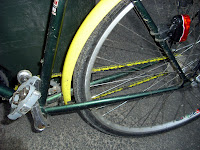 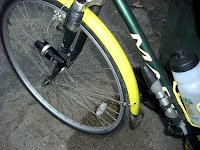 I think it's time for the Marin to get it's drive train overhauled because I dropped my chain again on a bumpy stretch of road.  Thankfully it was the dirt section of Pond Brook so I came to a quick, skidding stop.
I think I am going to have to ride the Qball on Thursday.  I have it rigged with knobbies at the moment but I might try to throw on some slicks on another wheelset and roll with those.  Of course, if I am geared then that that means I will have to ride some serious hills.