Monday night I checked Weather.com and it said snow on Tuesday so I figured I wasn't riding to work and stayed way past my bed time.  Tuesday morning it's absolutely beautiful out, now the forecast says snow on Wednesday and into Thursday.  So I blew my chances for bike commuting this week unless of course the snow we get on Wednesday turns out to be your typical southern New England spring snow, here today and gone tomorrow. 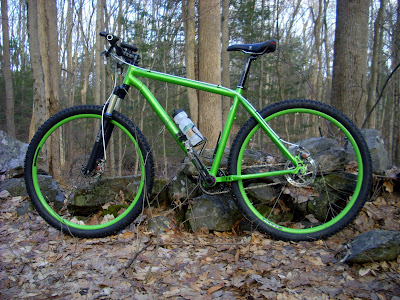 I figured if I rushed home from work I would have enough to get some saddle time on the Dillinger and it paid off.  Of course on the way home I was trying to figure out what I should wear because I don't want to over heat and at the same time I don't want to freeze.  Front brake was a little squeaky going down the driveway and as I suspected the crappy cable I used on the back brake was indeed crappy.  Fortunately, I picked some nicer to cable today at the Goodie Shop, along with a new crankset for the Marin (44t), a 20t Surly cog  and SRAM PC-1 for the diSSent. 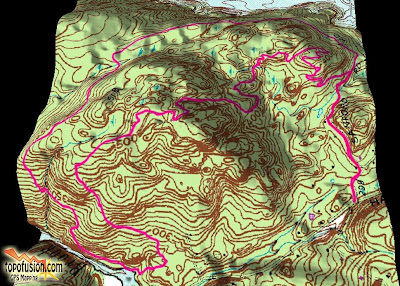 As I had expected, the Poly Brody had some muddy sections, this one below is about 100 yards from the Echo Valley lot.  Otherwise further up the trail it was fine.  However, stay off the Mulikin Trail.  There are some blow downs I have to tend to and it was really soft.  The section from the stone wall down to the quick S turn was really soft and it was like walking in a perpetual sea of dog shit.  There is also a blow down here two making this section unrideable as well.  The back side of the Poly Brody got blasted by that last rain. 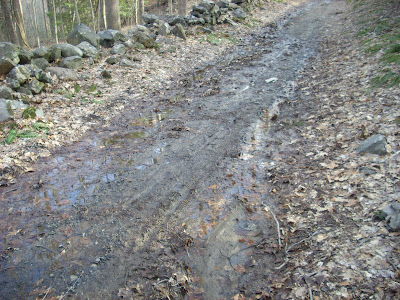 Riding up the back side of Poly I cleaned the Girl Friend and the Mistress but I couldn't get it up for the Wife.  The washout is much more pronounced and I attacked it from the right and at the cross over half way up is where I stalled out making the tranny to the left side.  She is a cold hearted climb.  I should have cut over sooner but the right side was a bit wider.  I think I am going to have to do some trail work in here.  First daliance of the season, there will be more dates to service all three.
As I expected the Gussy was perfect!  That's the difference between a sustainable trail and one that is not.  I by passed the hole on the descent where I taco'd at Xmas. It's right between this stand of four trees.  I didn't stop to fix it because I was filming the ride, next time through I will do something about it.
I didn't ride the Log Ride Short because it seemed wet and it can get really slippery and dangerous.
Then it was over to the other log ride which was a good huck.  It seems as though a blow down that I moved the last time I was in here, snowshoeing, has found it self back into the trail.  I hope that doesn't mean we have a malicious trail gnome here.
Again, some rocks looked out of place at the third stream crossing (first if you are coming down the trail) but it could have been a good natured trail gnome fixing this one section that often gets a little muddy.  By the looks of the banks it appears that last big rain storm really got this stream going. 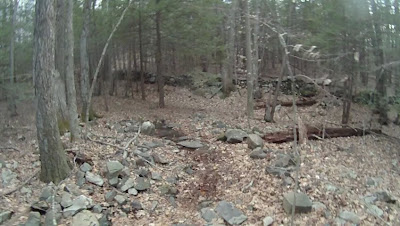 From here everything looked pretty normal but the wet spot was really wet.  I think I might have to do some more armoring here this year.  There is a big tree that has to come down after the ROW.  It's leaning against another tree and until it does in fact come down I think it would be prudent to go around it until is comes down.  It will make a great skinny when it does come down though. 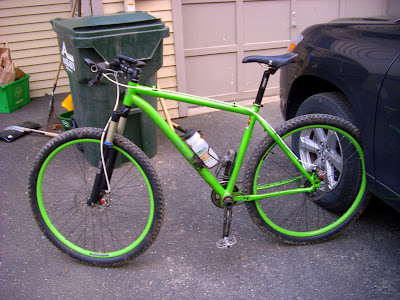 The Dillinger performed pretty well.  My rear brake was a little sticky but I knew that going into the ride and have a new brake cable for it.  The Blunts are nice and while the Krest 9rs are in fact a little heavy the extra grip was much appreciated.  Great start to the 2011 training season, although I am about a month late.  Damn snow!  And there is more coming today!
at 7:34 AM

I got so psyched when the warm weather was here last week, now this..damn you Mother Nature!

We definitely have to get out together this year!

Two places I have never been yet: Case and Tyler Mill. Let's try to ride there sometime.